One of the places that both C and A have got to know (independently) over the last couple of years is Portugal. Neither of us had really spared much time for the place, assuming that it was a kind of afterthought of Spain but with more cod and quirky fortified red wine and a language that sounded like the love child of Spanish and Russian.

This view was completely unfair to the place. As it transpires, Portugal's a great little country with a rich culture and history all of its own. The black and white cobbled streets of Lisbon and Porto and the dusty plains of the Alentejo beguiled us bit by bit, and A even took the time whilst on a break between jobs to learn a bit of the language and make some friends there. 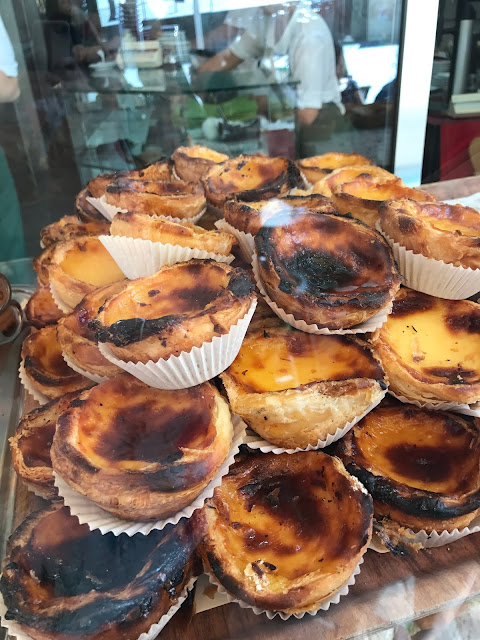 The cuisine is also fabulous: true, there is a lot of bacalhau (salt cod) available if you want it and this is somewhat of an acquired taste, but this is far from the only signature dish of the country. Sadly, we've discovered that piri piri chicken is actually a Mozambican thing, which, if you're a Nando's fan, is a scandal and Portuguese folks A knows wonder at how the English think Nando's is in any way reflective of their national cuisine. However we are pleased to confirm that pasteis de nata (or custard tarts) are the real deal. These are available literally on every street corner, and if you pay more than than a euro or so for one, you've probably been had. When done well, they are a perfect combination of silky smooth custard and crispy, flaky pastry.

The story of how they came about is also a little quirky. Apparently, Portuguese monastics used large quantities of egg white for starching clothes back in the day. It was therefore common for monasteries to make lots of custard and pastries using the surplus yolks. During the Liberal Revolution of the 1820's, the monastic orders in Portugal took a serious economic hit, and some enterprising monks living by the Lisbon docks started selling egg custard tarts in an attempt to make ends meet. They proved extremely popular and are now increasingly available outside Portugal. Even our local Deptford co-op sells them!

A and C have, over time, tasted these little crispy cups of delight in a number of places around Portugal - let's face it, it would be rude not to. Some suggestions of places whose pasteis de nata are the cat's pyjamas to try are below. Try washing them down with uma bica (a moderately strong Portuguese espresso) or a glass of fresh pressed glass of juice made with oranges from the Algarve for the authentic Portuguese experience.

Pastéis de Belém - Lisbon (Belém)
The granddaddy of Portuguese pastry shops sits right around the corner from the Mosteiro dos Jerónimos in the Belém district of the city. This is where the story begins; where the broke monks started selling tarts to make ends meet some 200 years ago. It's absolutely gigantic, with a rabbit warren of rooms which have capacity for some 400 people. Sure, it's firmly on the Lisbon tourist trail and the queues can be ridiculous at times, but these are not reasons to avoid it. Indeed, several of A's Lisboeta friends will tell you that it's is the only pastry shop worth going to in the entire city. See if you can get your mitts on ones that are still just a teeny tiny bit warm and where the custard is just s smidge off completely set. Bliss.

The original "buttery" is located an old butter shop on the Largo de Camões in Chiado. So locals tell us, this is the only bakery that really rivals Pastéis de Belém for quality tarts in Lisbon. The unit in Chiado is fairly small, but there's another branch in the Mercado da Ribeira down the hill by Cais do Sodré on the banks of the Tagus (and where there is heaps of seating). The Facebook page also tells us there is a shop in Porto too if you're up north.

Piriquita - Sintra
OK, this bakery isn't really about the custard tarts, but you can certainly get them here and it deserves a mention for other reasons. Sintra has its own speciality pastries: the travesseiro - a pillow shaped pastry rectangle full of custard and almonds - and the queijada - a cream cheese filled tartlet. Those in the know will tell you that Piriquita is the only place worth looking into in Sintra for these treats, and who are we to disagree? There are two branches in the village.

Going off on a complete (and non-food) tangent,  if you ever find yourself in Sintra, go to Quinta da Regaleira, walk the gardens and go down the well. It's bonkers!


Fabrica dos Pastéis - Évora
Tucked up an alleyway behind the main square, "the tart factory" is a real specialist. In fact, A can't remember them serving anything else other than pasteis de nata and Delta brand espresso. If you're in this little whitewashed UNESCO World Heritage listed town with arguably the creepiest church on the Iberian peninsula, check this shop out in a break between sites.


Nata Lisboa - Porto (two locations)
In Porto, not knowing any locals, C did some research ahead of time and was reliably informed by Culture Trip, Tripadvisor and so on that Nata Lisboa was the place to go. There are two locations, but C and friend H went to the one on Rua das Flores, near the main train station. So much did we love the tarts that we went every morning and had a pastel (or three) and a tea or coffee in the outside sun and cobbled streets. The prices were reasonable, too.

Padaria Portuguesa - Lisbon (various)
With over 50 outlets in Greater Lisbon, the chain is ubiquitous and functions as a kind of Lisbon Pret a Manger. It's a great little spot for breakfast - a roll, coffee and a glass of OJ will set you back €2.50 on the meal deal - and they also do perfectly passable tarts and pastries. A perfect place for a pit stop after you've slogged up a steep Lisbon hill. 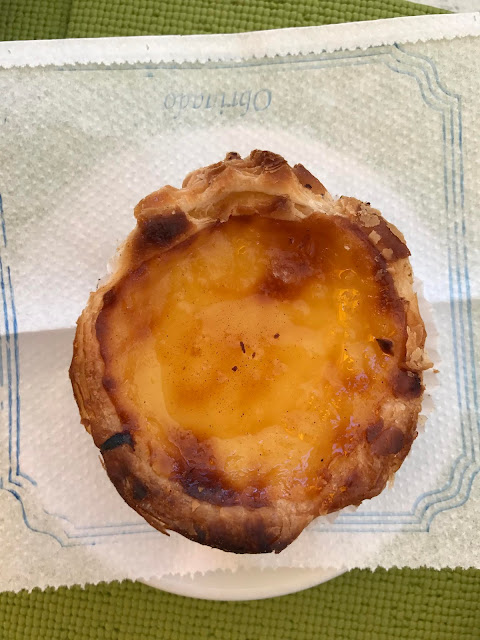