The Pickling Diaries: Instalment the First

As a treat to himself some while ago, A bought a somewhat niche present for himself: an English-language copy of Syra själv: konsten att förädla grönsaker med hälsosamma bakterier (translated into English, somewhat inaccurately, as The pickling handbook: homemade recipes to enjoy year-round) by award-winning Swedish science journalist and fermentation sensation Karin Bojs.

Despite being chock-full of really interesting information on pickling, fermentation and the science of low-tech food preservation, A had always been daunted by actually giving any of Karin's recipes a go. Rationally or not, he always thought that preserving food was the domain of professionals, and that trying such things in a domestic kitchen was a recipe for a dose of food poisoning, or worse.

However, over the Christmas break and in an idle moment, A pulled the book off the shelf and started reading it anew. Whilst admittedly still gripped by the fear of giving himself and C an epic dose of the runs (Nobel's Revenge?), he thought "other than this, what's the worst that can happen?". And so we have taken the plunge into the briny world of pickling. 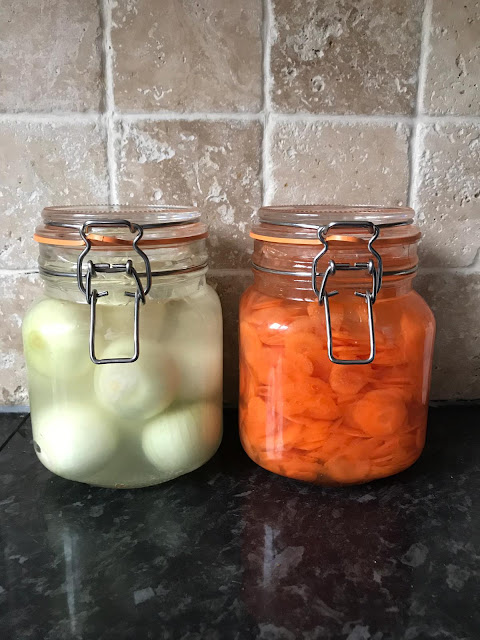 We're no experts on the science, but to summarise several chapters of what we've read the pickling handbook, the idea behind lacto-fermentation (the process we are trying out this time) is quite simple. Vegetables eventually rot under normal conditions, but sugars in the food and certain natural bacteria that exist on just about everything can be harnessed to keep the vegetables good for longer. This  technique involves coaxing lactobacillus planterum (good bacteria) into out-competing various other types of nasty bacteria inside a container such as a ceramic crock or mason jar. As part of the process, the lactobacillus planterum will produce lactic acid, lowering the pH of the contents of the container, killing the nasties and preventing the food from spoiling. If you do it right, you should have vegetables that keep for a many weeks longer that would ordinarily be the case.

This method of preserving food is used all over the world to keep food good: sauerkraut and dill pickles from Central Europe, Kimchi from Korea, Sriracha from Thailand and Tabasco sauce from Louisiana are all made using this technique.

The book stresses that the process is not only super simple, but  also extremely safe. We have decided to put this claim to the test. For the princely sum of £9.00, A purchased two one-litre Kilner jars, a bag of carrots and a bag of onions at the local supermarket (for the record the jars constituted around 90% of the overall cost and will be useful whether or not we do this again). The process was absurdly simple: boil two litres of water and add two parts sea salt (specifically without iodine). Pour over the veg (in the case of the carrots, peeled and thinly sliced and in the case of the onions, peeled and with the ends chopped off) and ensure that the brine covers everything by using a water filled plastic bag.