Very rare is it that we can say that we've been waiting years to try a restaurant - but that might just be the case with Copper and Ink. And happily, it certainly didn't disappoint.

We're avid fans of Masterchef, and way back watched the 2015 series where one of the finalists was Tony Rodd - who happens to be a Blackheath local. Blackheath, as regular readers of this blog will well know, is only a stone's throw from us in Greenwich / Deptford borders, and so finding out that he was from round our way gave us all the more reason to get behind him (the others being his amazing-looking food, of course - that, and his impressive moustache!).

A year or so later, and our local rag, "The Greenwich Visitor" was proudly announcing what Tony Rodd was doing - some food festivals, pop up events, and the like. Cue some piqued interest and a bit of Googling, and we found that he had plans to open a restaurant in Blackheath.


This was music to our ears for a number of reasons - not just because it's only a short walk from our house, but also because we're big advocates of the local high street and its independent establishments. In this day and age when we hear so much about how Britain's high streets are dying, it's lovely to see that Blackheath's is alive and well and, crucially, not full of chains.

Fast forward another year or so, and Copper and Ink, as the newly opened restaurant is called, opened late in 2018, taking over an old Strada unit. The website and social pages tell us that this is owned and run by Tony Rodd and his partner, and that the head chef is also an ex-Masterchef contestant.


And rest assured, it shows in what's served up. We went for a Saturday night dinner, at which there were two options - an a la carte, and a tasting menu at a very reasonably priced £40. The tasting menu looked delicious, but contained dishes such as beef, which is a bit lost on pregnant C at the moment as she can't have it pink for the next few months (and sees no point in having it well done!).

So, we opted for the a la carte, and it didn't disappoint. After much deliberation ("I could literally eat everything on this menu!" - A), we opted for the braised leeks, peppered goat's curd, raisin puree, capers and crispy leek and the confit chicken thigh, fondant potato, miso broth and picked shimeje mushrooms to start.


A had the former - blanched leek was topped with crispy leek, and garnished beautifully with all the other elements mentioned in what was definitely an attractive plate ("It looks like Masterchef-winning food, doesn't it?" - A). The flavours were perfectly balanced: the peppered goat's curd working particularly well with the leek, with the raisin puree giving it a sweet twist. The only downside was that A did feel a little short-changed, with what felt like only about half a leek in total - albeit a very delicious, clever and well-presented half.


C had the confit chicken thigh - and phwoar, what an incredible dish. Again perfectly balanced, the combination of the crispy chicken skin, soft chicken thigh, creamy fondant potato and the whack of umami from the miso and shimeje mushrooms was an absolute delight. This was probably (although the jury is out - see the desserts for more) C's favourite dish of the menu.

Onto the mains. Again, much deliberation, but we both ended up going for vegetarian choices. C had the herb falafel, roasted squash, aubergine, pomegranate, hummus and tahini, and again this was a really well balanced and prettily presented plate of mezze-type offerings. The herb falafel was unusual - A was a bit dubious about whether it was a "proper" falafel due to the twist of sesame seeds on top and the herbs inside, but C really enjoyed it.


And then onto desserts: we hardly had room (particularly C, with growing baby - who kicked all the way through dinner, so clearly is also a big fan of Copper and Ink, sensible girl), but we decided that we'd have to find some as they looked too good not to try.

A went for the rum and caramelised white chocolate parfait with orange, labneh and hazelnuts. This wins prettiest plate of food of the evening, with its edible flowers and delicate presentation. However, and regrettably, A has to say that he found this a bit bland. The rum did come through, but the white chocolate less so, and it was quite tricky to eat - a bit too frozen to get a spoon into. It was a perfectly passable dessert, but just not at the standard of everything else we tasted on the day, which was all exceptional.


Talking of exceptional, enter C's clementine posset with redcurrants and gingerbread. Not the biggest or most beautiful of the dishes we ate, but possibly the most tasty: a perfectly sharp and sweet citrus delight with a really strong and crunchy gingerbread. Just so good.

This was all rounded off by some petit fours, which were also seriously good ("This is real showing off now isn't it - how incredible are these!" - A). The highlight was probably the pistachio macaroon - a perfect texture, which as anyone who's tried to make them knows, is flippin' hard to achieve.


We didn't have wine, but the wine list looked really extensive, and the cocktails looked great. The ambience was good - especially so given that it's only been open a few weeks: not many other tables were taken before half 7 when we arrived, but by the time we left, the place was full and buzzing.

Without wine, but eating our way through the menu, it came to around £40/head. Considering the quality of the food, it represented excellent value. Suffice it to say, it was certainly worth the wait, and we're very pleased Copper and Ink is here. We'll be back! 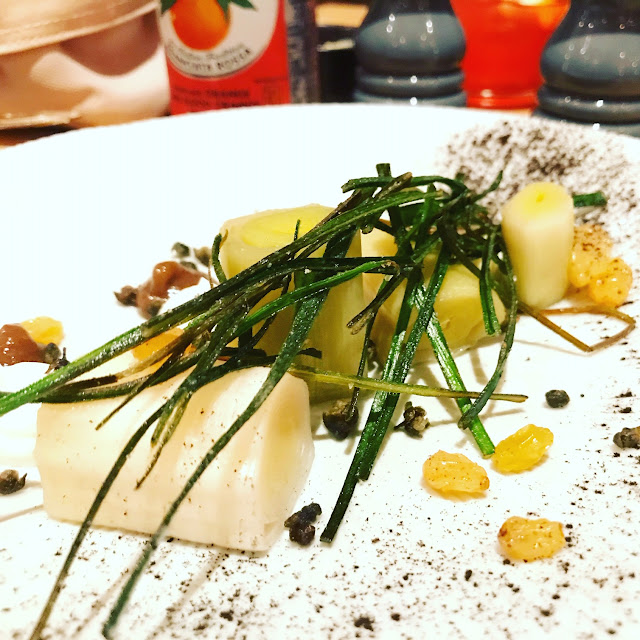