New openings, pop-ups and other food and drink news across South East London. Greenwich, Deptford, New Cross, Blackheath and beyond... 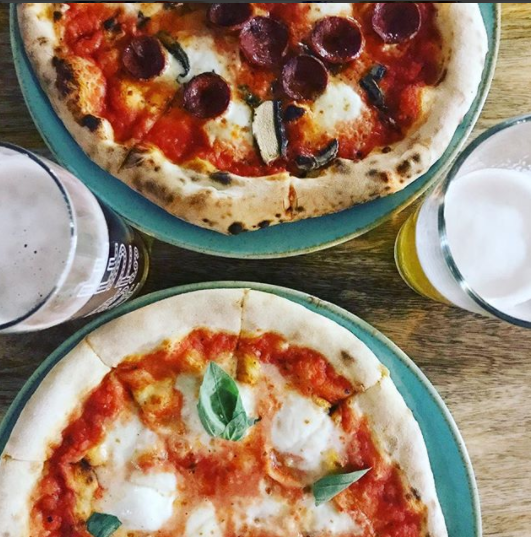 Sparrow, SE13
http://sparrowlondon.co.uk/
What? A husband-and-wife team whose experience includes big names such as Pollen St Social and St John take a unit on a busy gyratory by Lewisham station and turn it into the area's latest trendy offering, with a menu that changes based on seasonality.
Where? 2 Rennell Street, Lewisham, SE13 7HD

Noak, SE4
http://www.noak-se4.co.uk/
What? Brockley favourite Noak reopens for brunch and all day dining. We haven't been yet, but we can't wait to get there soon.
Where? 209-211 Mantle Road, Brockley, SE4 2EW

Number 50 Friendly Street, SE8
https://www.instagram.com/no50friendlystreet/
What? Not so new, as it's been open since late last year, but very deserving of a mention in any case. Cute, modern cafe spot on our favourite street in the area, very much living up to its name. Coffees and teas a-plenty.
Where? 50 Friendly Street, Deptford, SE8 4DR

Gin & Beer, Deptford SE8
https://ginandbeer.com/
What? Thought Deptford couldn't get any more trendy? Think again. This spot, specialising in - you guessed it - gin and beer, opened recently and has already had rave reviews. A welcome addition to the burgeoning bar scene in SE8. We haven't been yet, but we will soon...
Where? Unit 2, Resolution Way, Deptford, SE8 4NT

Taproom, Deptford SE8
http://www.deptfordmarketyard.com/taproom-se8/
What? One of our new favourite places, opened just before Christmas (so ok, not that new, but we thought it still deserved a mention) in Deptford Market Yard. Hop Stuff Brewery are behind this joint: it's their second, with the original in Woolwich. The beer is brilliant. The wood-fired pizzas are great. The unit is spacious and the atmosphere is relaxed. What's not to like?
Where? St Paul's House, Deptford Market Yard, SE8 4BX

Deptford Bites Festival (weekly), SE8
http://www.deptfordmarketyard.com/deptford-bites/
What? If you haven't heard of this yet, where have you been? Deptford hits peak trendy with the launch of Deptford Bites festival, a weekly event starting Saturday 7th April. It promises to bring together the best produce and street food traders in South East London, and there'll be crafts and music on offer too. On 7th April, for the food market's opening week, Grace Dent is curating and hosting Deptford Bites Live, a food festival-cum-celebration of the local food scene. Grace has been a fan of Deptford for ages, remember - it was she who wrote about Marcella when it first opened, lest we forget, and caused all those who had never heard of our part of town to start descending on it in their droves on the buses from Peckham - and so it seems only sensible that she's the one hosting talks discussing how it's got achingly trendy around here and why.
Where? Deptford Market Yard, Deptford, SE8 4BX

Catford Food Market, SE6
https://www.catfordfoodmarket.com/
What? A monthly food market, starting on 26th March, showcasing and celebrating 'every aspect of Catford we want to celebrate'. Promising everything from street art to community cooking to coffee with a conscience, it's taking place on Catford Broadway. The website also promises gin. We're sold!
Where? Catford Broadway, Catford, SE6

Woolwich Street Feast, SE18
https://www.streetfeast.com/visit-us/public/
What? Also joining the "getting so trendy we're not sure how we feel about it" camp is Woolwich, with its brand new food stadium, open every Friday and Saturday from 5pm til late. Just by Woolwich Arsenal station, it promises a whole host of food and drink options. We can't wait to try...
Where? Plumstead Road, Woolwich, SE18 7BZ

Throughout April: Damascus Chef at Archibald's, Catford SE6
https://www.damascuschef.com/
What? Delicious Syrian food courtesy of Damascus Chef, a team who have taken up a longer term pop up residency at Archibald's following a couple of one-off events. We went to one of these evenings back in February and had a brilliant time. Their baba ghanoush was to die for, seriously - and their dessert of pistachio baklava with tahini and date molasses was a real hit also. Try this place: you won't regret it, and the people who run it are super friendly and welcoming, too. BYOB.
Where? Archibald's, 280 Sangley Road, Catford, SE6 2JT

21st April: Gills Gills Gills Supper Club, Greenwich SE10
https://www.eventbrite.co.uk/e/gills-gills-gills-spring-supper-club-london-tickets-44304913188
What? The first of Gills Gills Gills' supper clubs in 2018, this promises to be a celebration of all things seafood and fish - and it's all for a good cause as well, raising money for local charity Quaggy Development Trust. Tickets are £25 and for this you're promised a three course meal including a variety of fish curries and a cured trout and citrus salad, amongst other things. We'd be there with bells on, if this date didn't happen to be our wedding anniversary - but we urge you to go!
Where? Quaggy's, Parkside Square, SE10

5th May: We Love Cheese at Deptford Market Yard, SE8
https://www.eventbrite.co.uk/e/we-love-cheese-cheese-cup-tasting-card-deptford-tickets-42873269102?aff=es2
What? If you love cheese as much as we do, this will be one to make sure you don't miss. It's sure to be positively un-brie-lievable (groan). We can't wait.
Where? Deptford Market Yard, Deptford, SE8 4BX


COMING SOON, CLOSING AND OTHER NEWS

Coming Soon: Heaps Deli & Diner, Deptford SE8
https://www.heapssausages.com/content/
What? Local legends Heaps are coming to Deptford - hurrah! Not sure when this one is opening, so watch this space, but it promises to be April and their renovations of the unit seem to be going well so far. They're due to be occupying a fairly large plot, opposite hairdressers The Bohemians and just by our newly returned anchor, and their website promises that they'll have a deli and a dining area, serving both brunch and evening dining. We can't wait.
Where? On the corner of Deptford High Street, SE8 4PA

Coming Soon: The Tapas Room, SE8
https://www.thetapasroom.co.uk/
What? Not to be confused with the Taproom (see above), Basque joint the Tapas Room promises to offer a wine shop, tapas bar and deli.
Where? Deptford Market, SE8 8BX

Coming, Sometime: Microbrewery Plans for New Cross, SE14
http://planning.lewisham.gov.uk/online-applications/applicationDetails.do?activeTab=documents&keyVal=_LEWIS_DCAPR_93202
What? A long way off unfortunately, but this sounds exciting: plans for a microbrewery in New Cross! We'll update when we hear any more. Thanks to Brockley Central for the tip-off on this one.

CLOSING, AND OTHER NEWS

Closing: Winemakers, Deptford SE8
Locals are gutted about this closure, but we hear there are plans for its revival already, so we're keeping our fingers crossed...

Closing: Peter de Wit's, Greenwich SE10
A local, if slightly touristy, favourite right near the covered market. This is a real bittersweet one for us, as it's long been one of our favourite places to go and was the one cafe we used to frequent before we even moved into the area. Its four walls will always hold fond memories of us debating whether we should move to the area and de-briefing thoughts on the various properties we saw when doing viewings before we'd offered anywhere. We wish the proprietor, who we hear is retiring, all the best.

And finally, a WTF Moment: Jay Rayner reviews Sanxia in Deptford, SE8
Yes, really. Sanxia! Really. Anyone who knows this joint will know that it is fairly unassuming and not exactly where we'd imagined Mr Rayner to spend his Saturdays, but there you have it. He liked it, too. We're very pleased to hear he was a fan!
Labels: Blackheath Brockley Cafes Catford Deptford Greenwich Lewisham Markets Pop-Ups Restaurants Round-Up Snippets South London Street Food Woolwich