Despite the fact that it’s nearly the equinox, it’s been snowing AGAIN in London again this week. So to try and beat the cold and to tame raging stomachs after a heavy session in the gym, we headed out for a proper lunch. We didn’t want to go far, so we hit the Old Brewery, a pub with a dining room in the grounds of the Old Royal Naval College in maritime Greenwich, for a bite.

This place used to be owned and operated by the Greenwich Meantime brewery many moons ago when it was still independent. However, at some point after Meantime was taken over by SAB Miller and then sold on again, the bosses decided that running Greenwich pubs was no longer a core business and it passed the running of the place (and others locally) on to the pub, restaurant and hotel manager Young’s. This was probably a net positive. The venues are always pleasant and serve up good quality, classic pub grub at sensible prices and the service is invariably very good. The Old Brewery is no exception.

In the end, we didn’t want masses to eat, so skipped the starters went straight for a main each. C, who is fully off meat now, had the vegetarian Wellington with goats cheese and mushrooms. This was a great alternative to roast meat. The dense, creamy filling packed a real umami punch and was wrapped in lovely crisp pastry. The slice of Wellington was also served with all the trimmings, including a whopper of a Yorkshire pud, roast potatoes and a selection of braised vegetables. 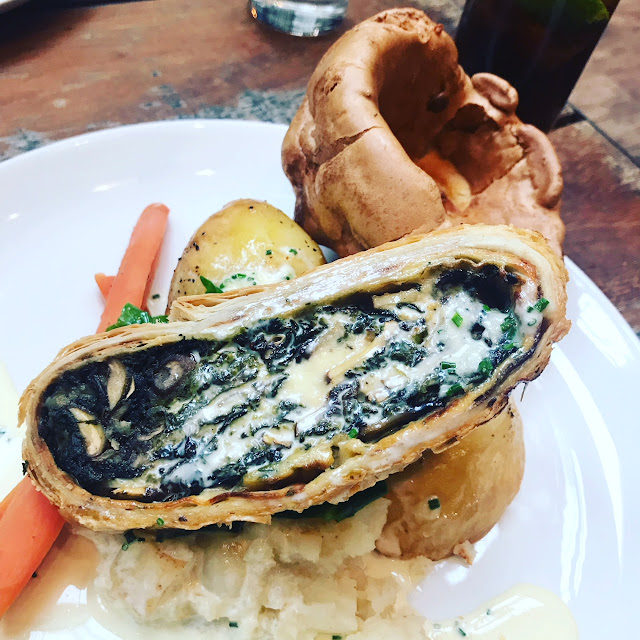 A went for a hamburger. He’s had this at many a Young’s pub and knows it is a winner. True to form, it did not disappoint: a soft bun, juicy patty, slice of cheese, caramelised onions and all the condiments. In short, what’s not to like?
The dining room is also really atmospheric, being set in a large airy space with some beer vats and general naval paraphernalia. Two mains and two drinks came in at about £16 a head, which doesn’t break the bank either. 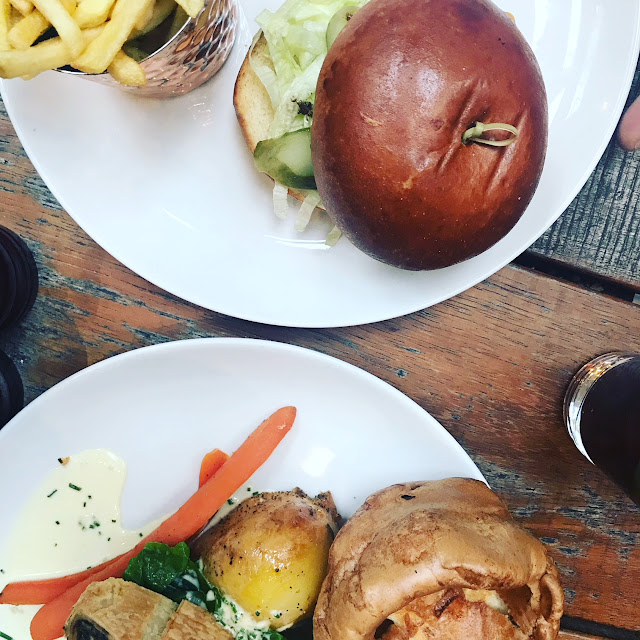 If you’re in the area, check the Old Brewery out. It’s a safe bet: an affordable quality choice in a genuinely pleasant venue and with efficient service, it may not be one of the most exotic restaurants in London but a good meal is all but guaranteed. It’s streets ahead of many of the tourist traps that plague Greenwich town centre.
Labels: British Brunch Casual Dining Dinner European Gastropubs Greenwich London Lunch South London Sunday Lunch Under £20pp