We have from time to time been known to make trips to the Alps. For a long weekend each year we try, if we can, to escape the bright lights, mad schedules and pollution of London and head to the mountains. We don't go to ski, but rather we go in summer to hike, swim, get some sun and generally unwind. As C returns from a stint in the sun, we're pining for the heat and the hills once again.

Austria may not be known as a culinary Mecca, but our view is that it's somewhat overlooked. Sitting in the heart of Europe, the food takes its cue from its neighbours and former imperial dominions.

Much of the food takes its cue from neighbours: sauerkraut and goulash are staples, but it's got its own style too: there is the famous "Wiener Schnitzel" (translated as Viennese cutlet) that's known the world over.


Similarly, Austria's pretty hot on cakes and pastries. It's not for nothing that one of the words for pastry in French is "Viennoisserie", which derived from the word Vienna (but more on the cake thing later). The country also has a fantastic wine industry (which, as we've written about before, doesn't deserve it's bad rap), and a serious brewing culture.

After a speedy bit of research on Tripadvisor, A decided to take C to what turned out to be a Salzburg institution: zum wilden Mann. Zum wilden Mann is a typical Austrian pub with shared tables, antlers hanging on the wall, the ageing host and hostess who wander around in Lederhosen and Dirndl. The food can be characterised as both delicious and copious.


We went for the wiener Schnitzel and the Bauernschmaus (the latter is roughly translated as the farmer's feast).  Though wiener Schnitzel probably needs no introduction, it's worth pointing out that they come in both pork and veal varieties. A Bauernschmaus probably needs a little more explanation: it's essentially a variety of different pork meat. In this case, it came with roast pork, hot roast ham, a sausage, a dumpling, and sauerkraut.

Both were, it has to be said, absolutely cracking. The schnitzel was cooked to perfection, with a light crumb, a good crunch and beautifully cooked tender meat. Likewise, the meats in Bauernschmaus were beautifully tender and the variety of the dish was excellent. None of the three meat slices tasted remotely alike, the dumpling was neither too heavy nor too soggy and the sauerkraut had the right balance of spice, acidity and sweetness. 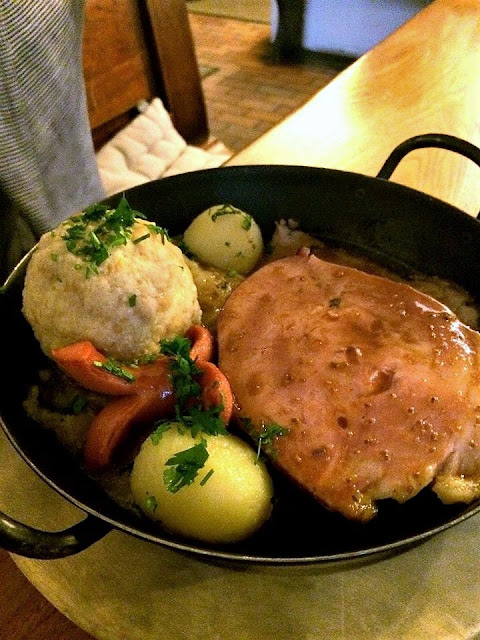 This place is extremely popular with tourists and locals, and they don't take bookings in the summer. However, if you're in town, this is probably a must try. It's also relatively inexpensive with mains costing around €10-12 each.

If this has inspired you to give Austrian food a try, there are a few places in London where you an give it a go. Here's a list of our favourites: