C and some of her colleagues have been working some pretty long hours lately for a campaign for one of their big FMCG clients. A few weeks post-launch and, with the campaign generally considered a success (much to their relief), the four account team members decided to celebrate with a slap-up lunch.

It was so good that from the first plate of antipasti, C knew it was one that she had to blog - if also just to make the point that it's not only A who gets to go out for fancy work lunches (Oxo Tower, eat your heart out!) 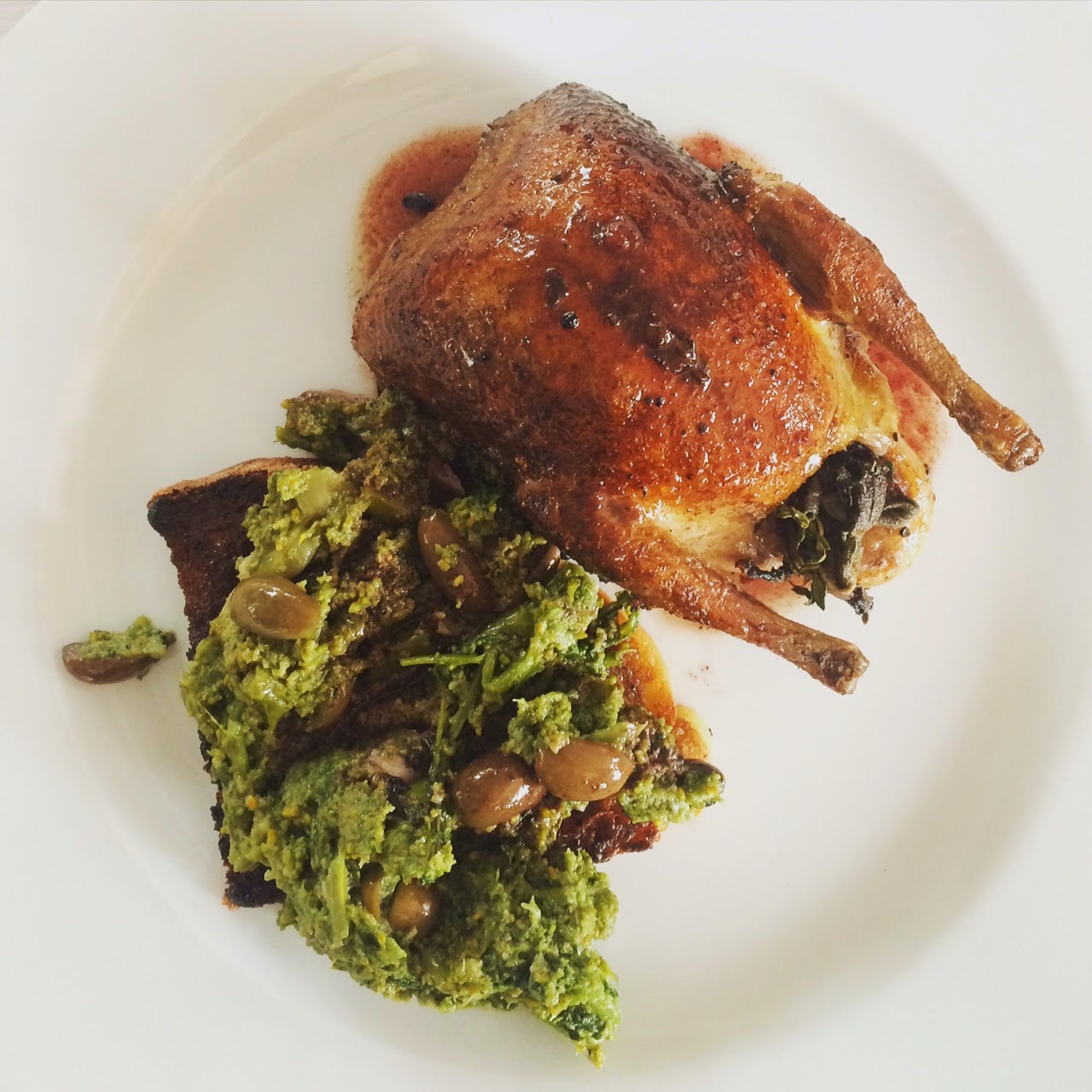 Colleague J suggested we try out The River Cafe - a place which enjoys almost legendary status in the London restaurant scene, but which we haven't ever ventured to. Having lived in north London for a while, and now living south-east down in Greenwich, it's safe to say that Hammersmith is not exactly somewhere we often frequent. The odd trip down there does remind you why the house prices are sky high, though - on the river, close to the centre of town, the enviable west London address and some pretty cracking pubs and restaurants. 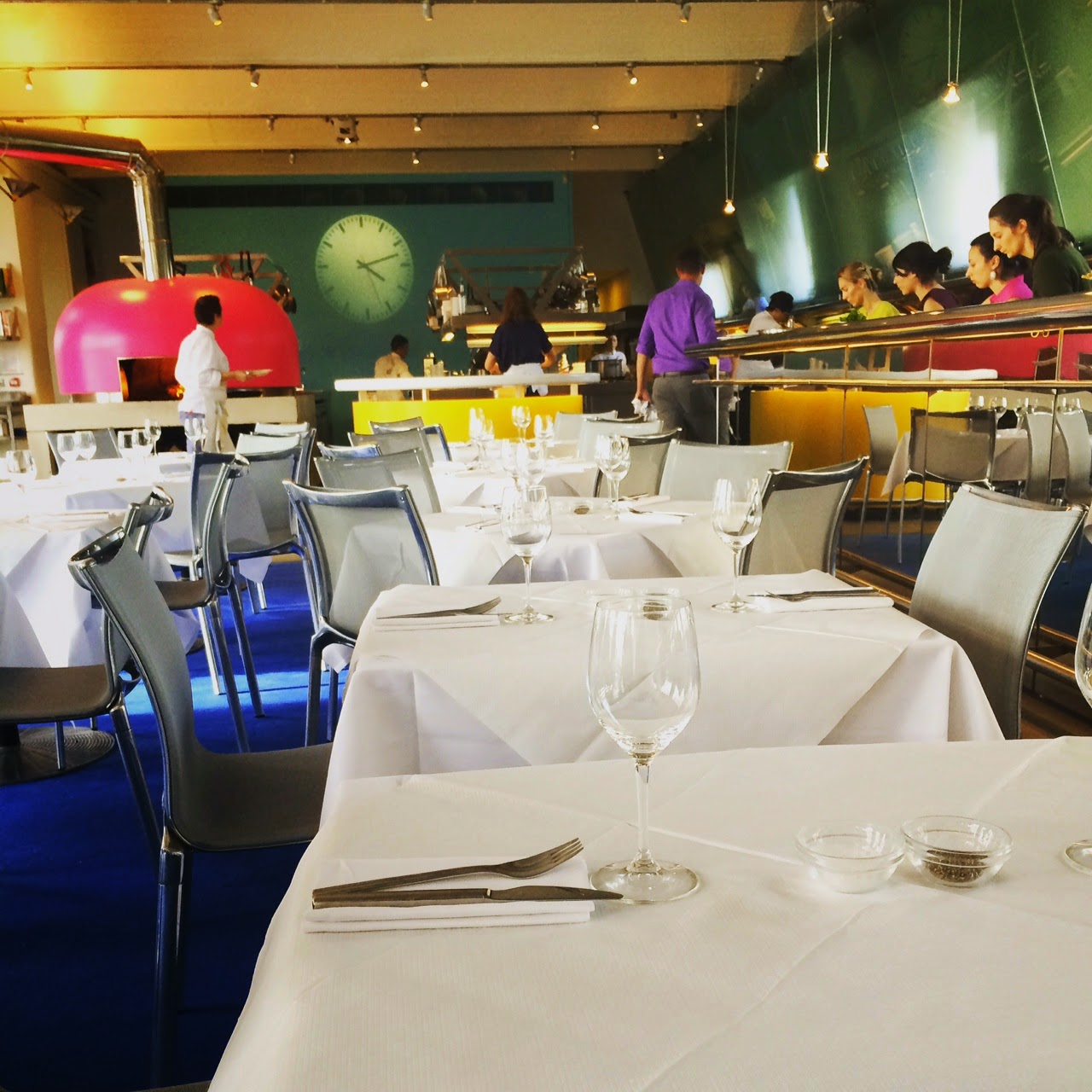 The River Cafe is a stylish place. Airy, light and unpretentious in its decor, it has a relaxed and refined feel to the interior and a terrace outside that runs along the whole exterior of the building, overlooking the river and the restaurant's own vegetable and herb garden. Being a bit too nippy for the terrace in mid April, we opted for inside and were sat on a table near the bar. 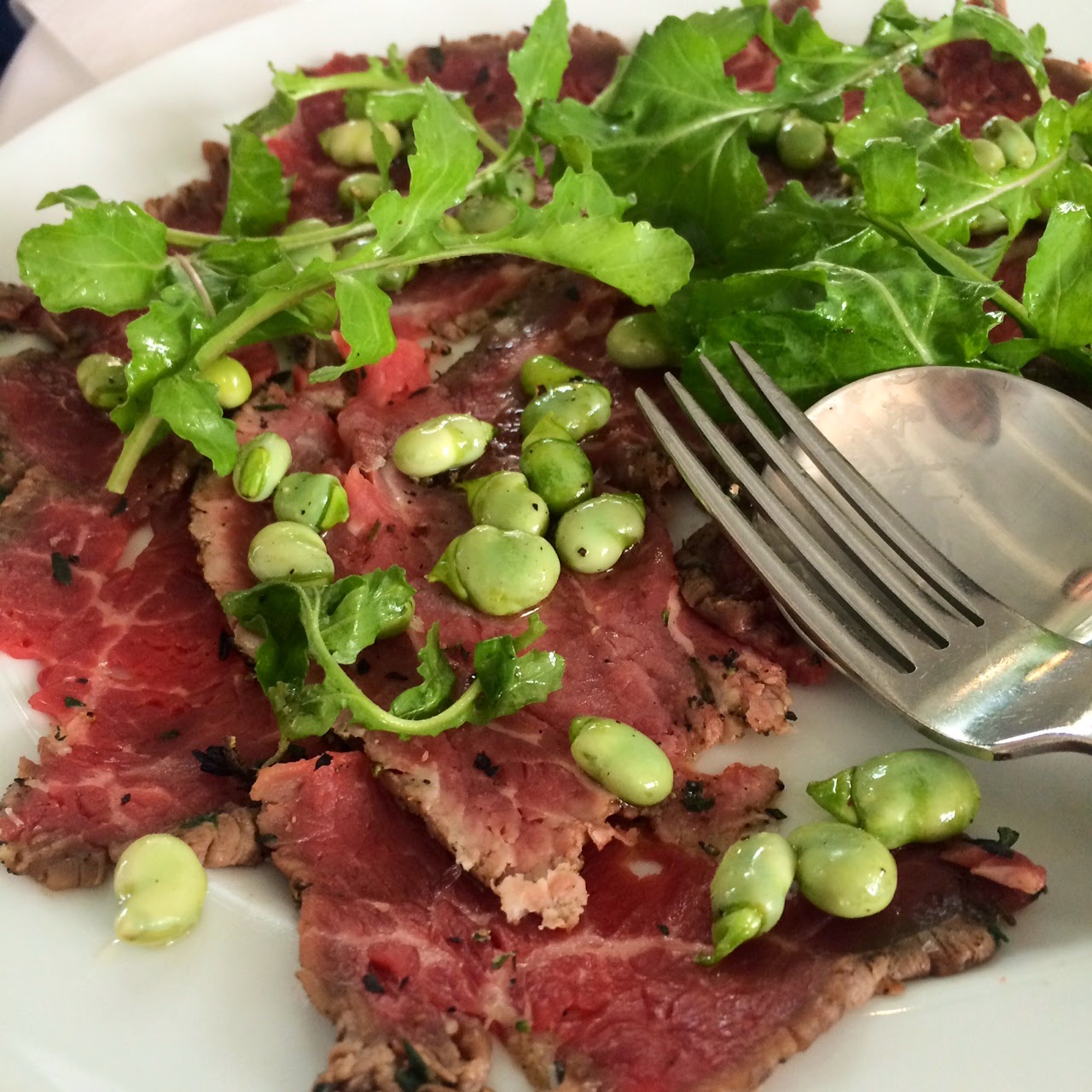 The menu here changes every day, although there seems to be some tried and tested staples which appear in various forms most seasons. The four of us started with a good bottle of Italian red and a carpaccio of beef with broad beans and rocket - it was tender and flavoursome, and the plate came together very well. Not being a big seafood fan, C let the other three tuck into the calamari ordered as the second antipasti - it came very well presented, but was the only dish that got slightly mixed (or at least, not quite rave) reviews. Priced at £19-£20 per dish, though, it does ensure you savour every pricey mouthful. 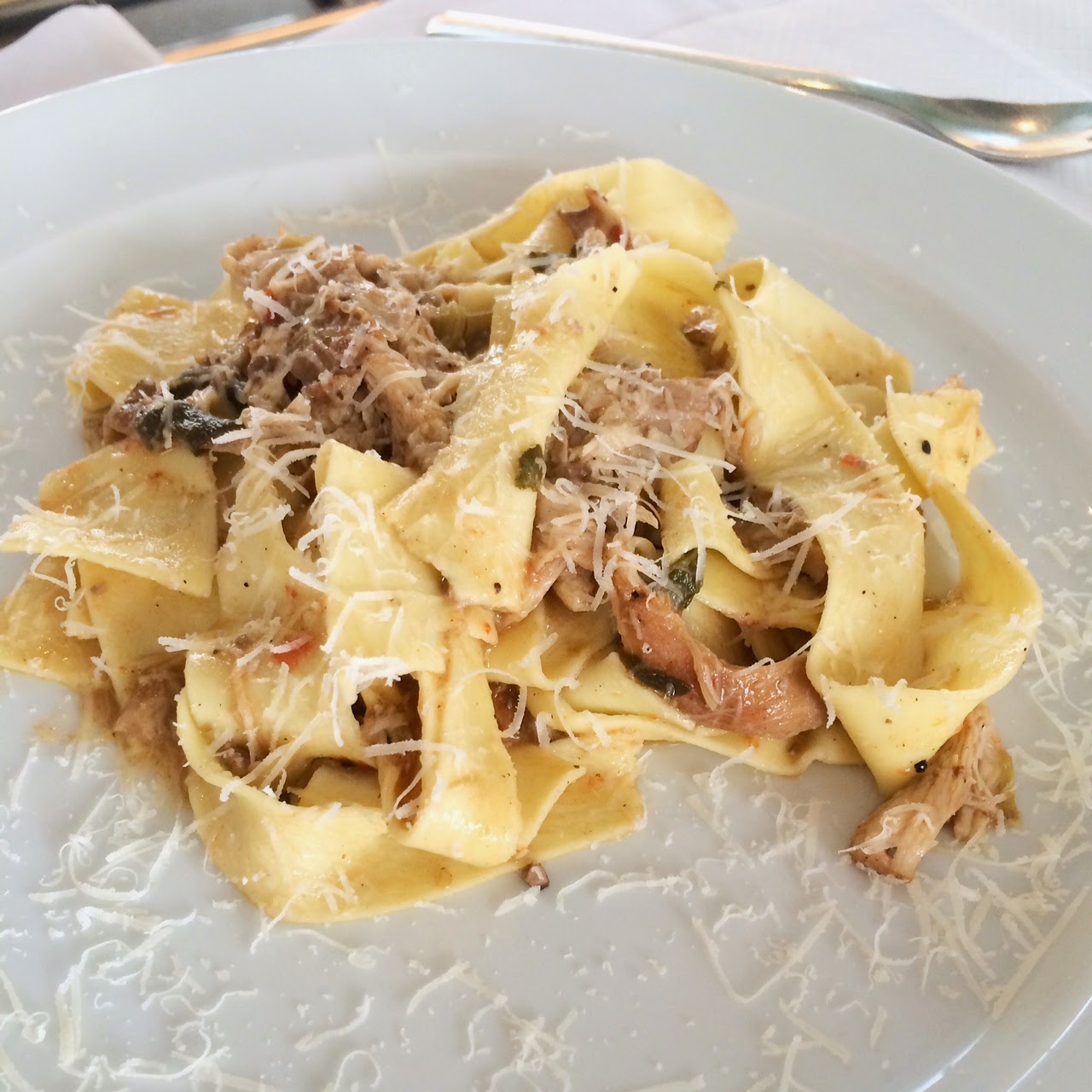 For the primi course, the three men opted for a rabbit tagliatelle dish, which came beautifully presented and as a decent, but not overwhelming, portion. This one certainly did get rave reviews, especially for the flavour of the rabbit, as did C's choice - fresh nettle ravioli with buffalo ricotta and pecorino. 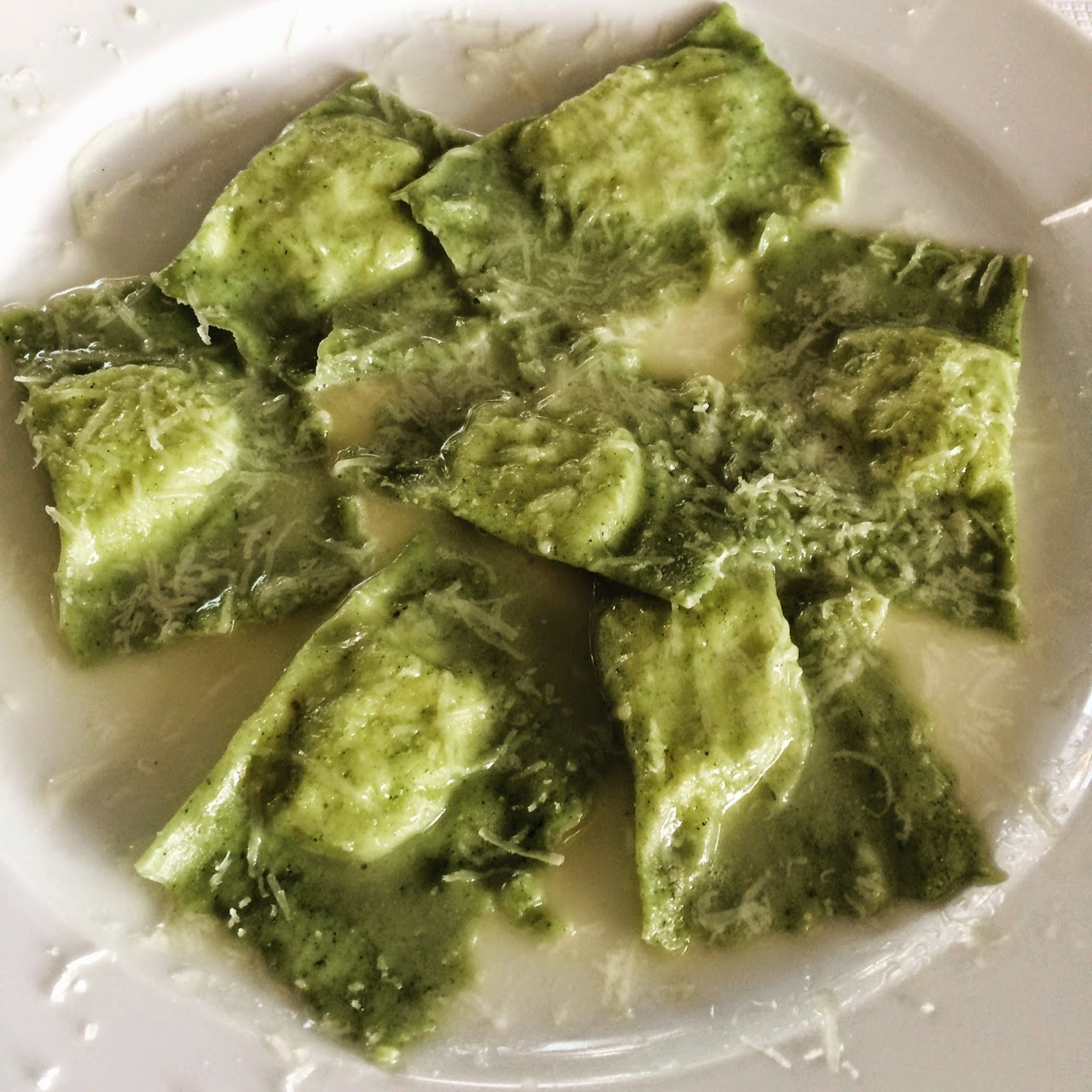 This was melt-in-the-mouth delicious: the filling was creamy and sweet, the pasta soft and the sauce buttery. If there were any holes to be picked in the dish (and, at £21 for a small plate of pasta, this feels justified), it's that it was ever so slightly swimming in the buttery sauce - some of the ravioli suffered a bit too much from the soggy bottom syndrome. 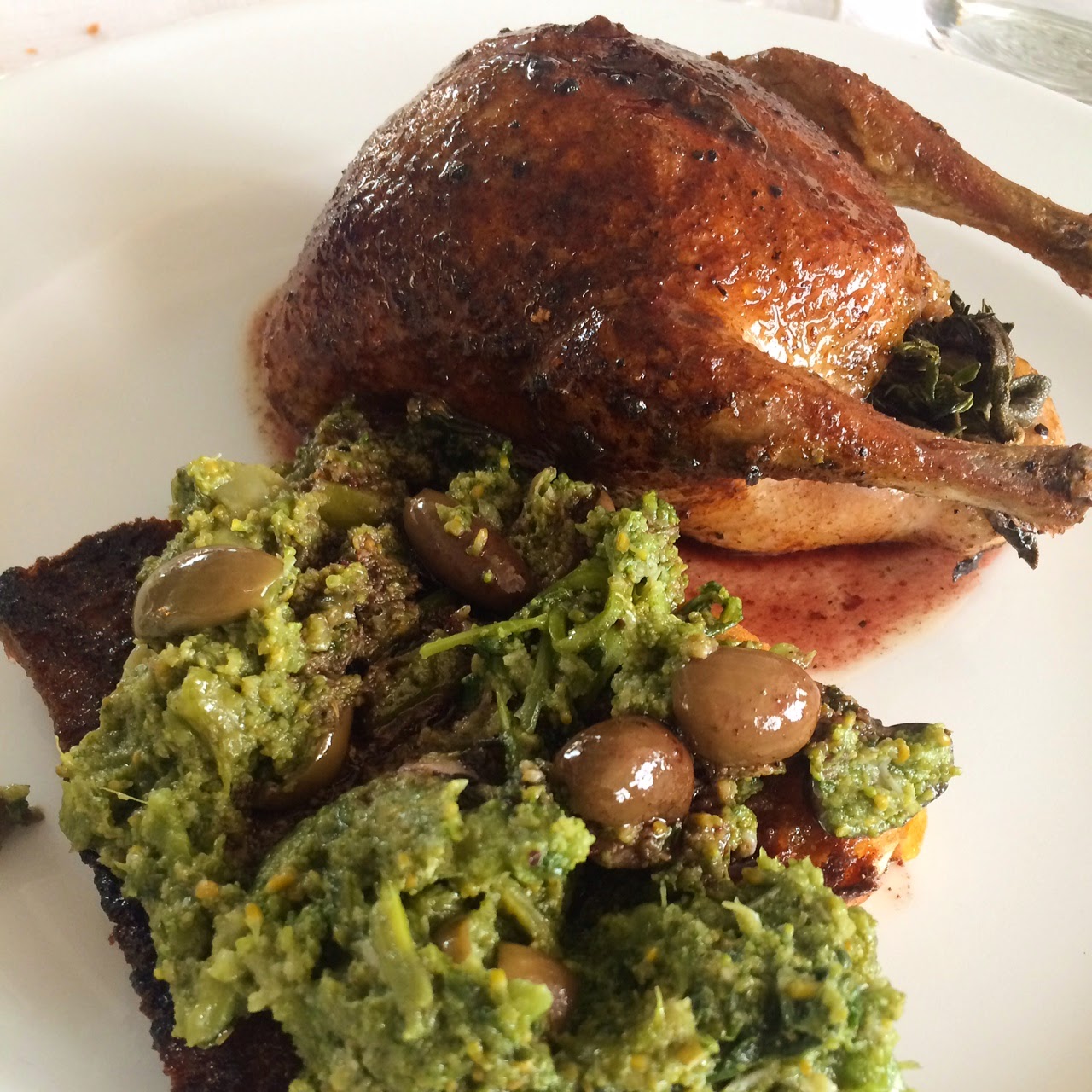 For mains, three of the four of us opted for the wood-roasted Anjou pigeon on bruschetta with tenderstem broccoli and green olives. Having never had pigeon before, C would be keen to eat it everyday if this is what it's always like - pink, tender, and not too dry, with a great woody, herby flavour seeping through. The bruschetta was indulgently oily and the broccoli/olive mix quite sharp and full of flavour. It was an excellent dish - but again, slightly eye-watering at close to £40 just for the one course. Colleague J had lamb - no photos of this one, as everyone was too busy eating pigeon, but it also came beautifully presented and there were a lot of satisfied nods around the dinner table as we all tucked in. 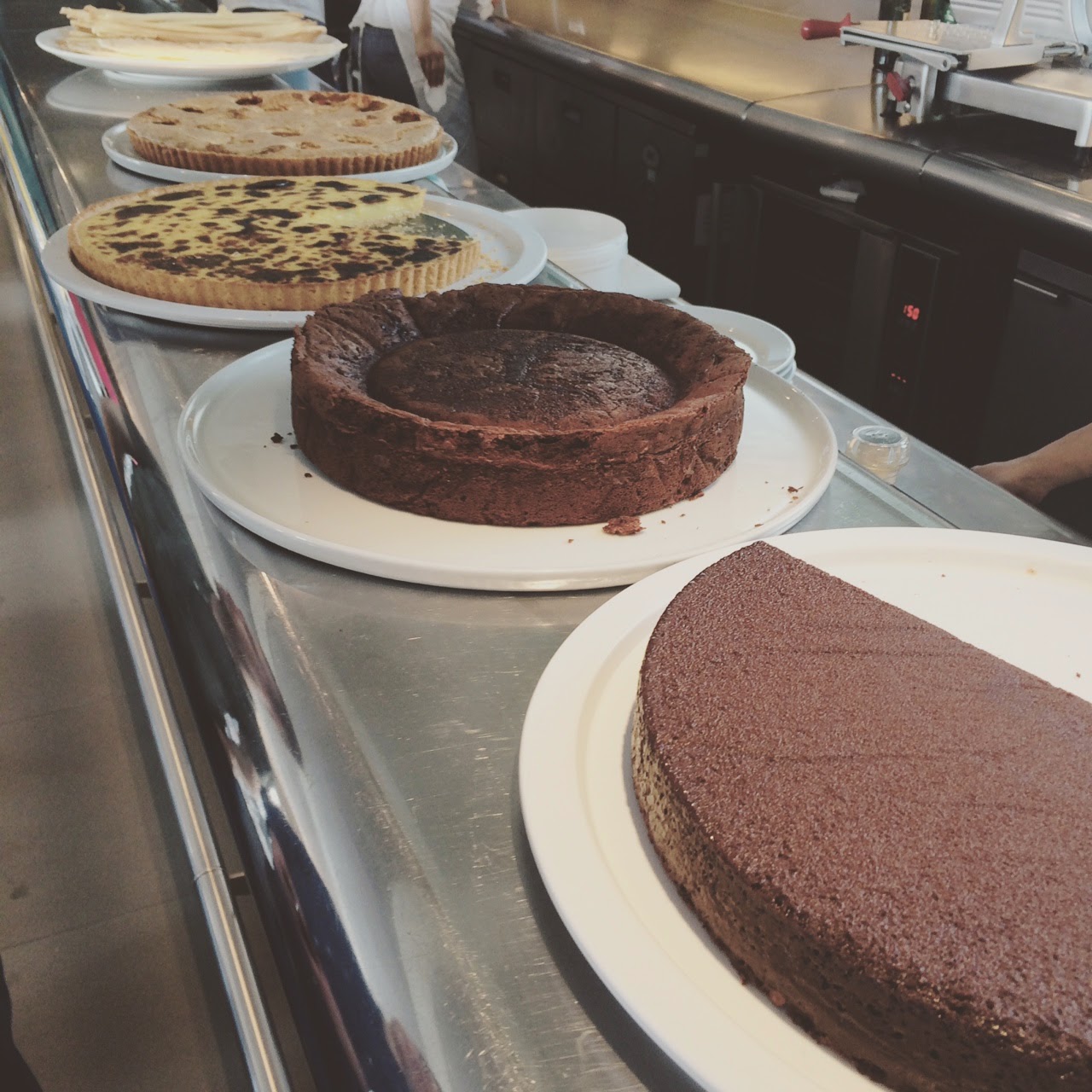 Finally, desserts - which were laid out on the bar top next to our table, taunting those with a sweet tooth like C the whole way through the meal. Two of us went for the lemon tart, and it was perfect - really sour and tart, and the pastry was firm, buttery and ever so slightly crumbly. 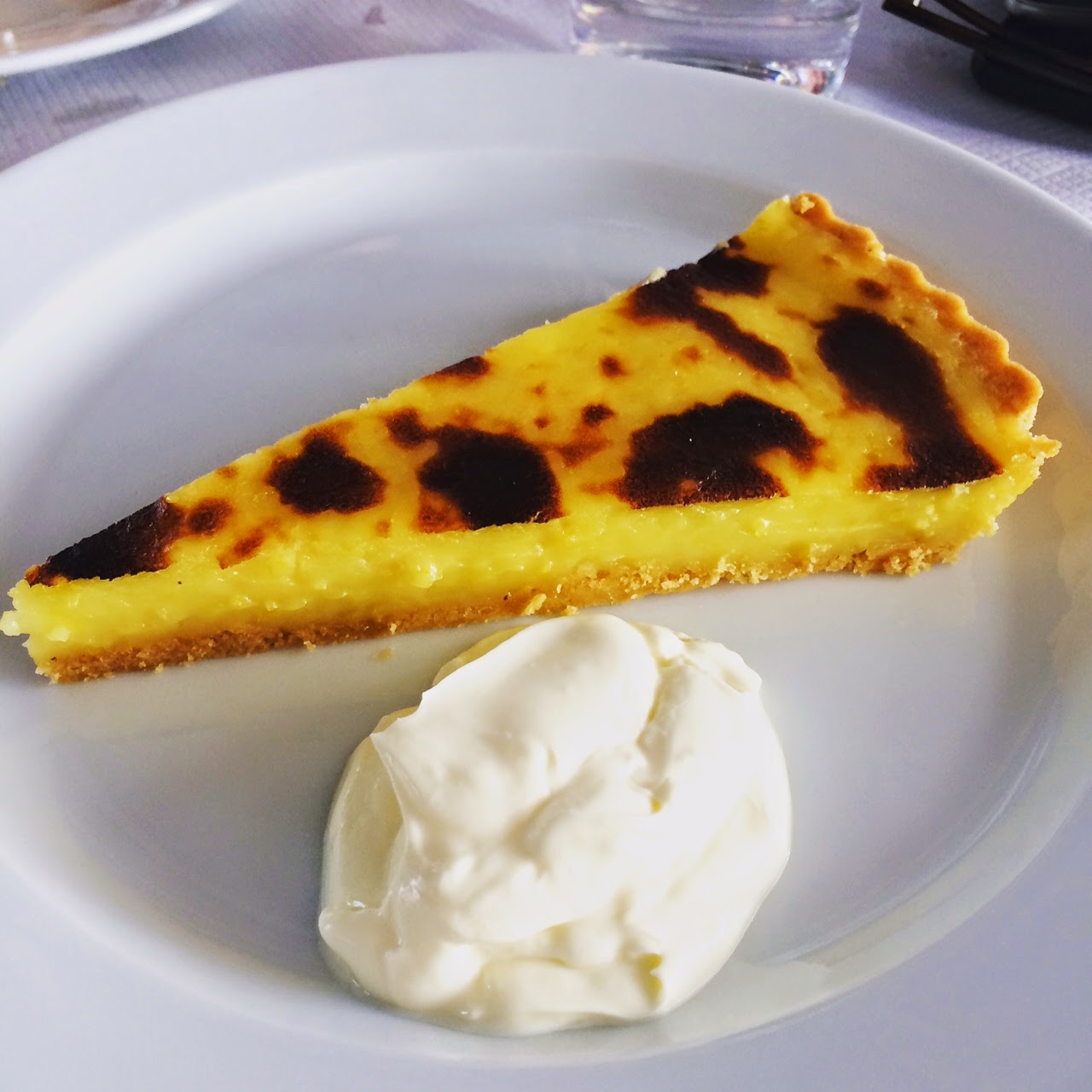 Colleague N went for the mysteriously named chocolate nemesis - after a cheeky taste, the remaining colleagues suffered from some serious pudding envy. It was a kind of gooey-looking chocolate cake, but instead of being dark and dense as suspected, it was suprisingly airy and light, and all around delicious. 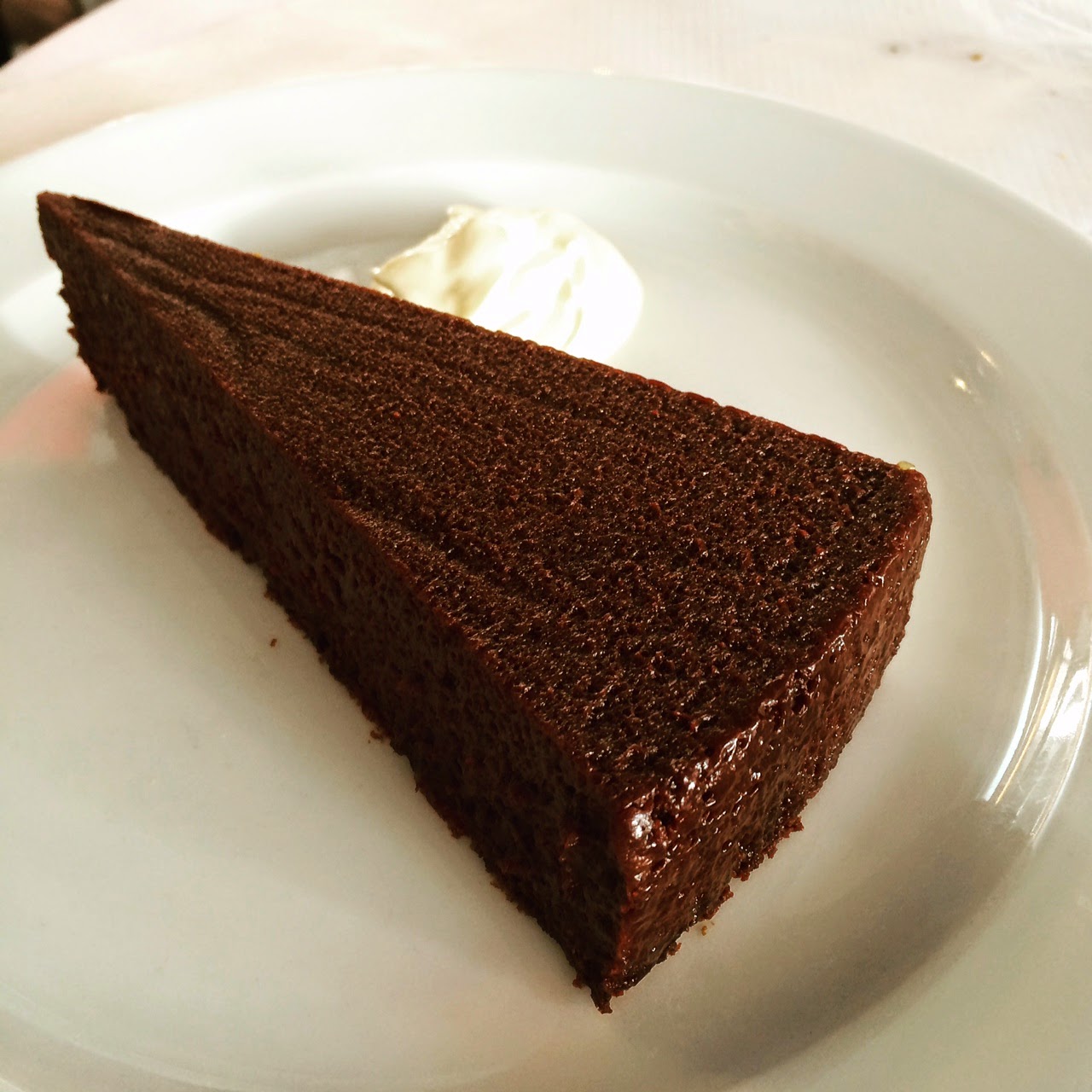 After a round of teas and coffees, we rolled out of the place and almost all fell asleep in the cab back to the office. The River Cafe is great, and it's heartily recommended as a place to go if someone else is paying. If the bill's on you, though, prepare yourself. Here's a little perspective: this place comes in about the same, or pricier even, as Alain Ducasse at the Dorchester, Dinner by Heston, Restaurant Gordon Ramsay, Le Gavroche or Fera. No doubt it's brilliant, but is the food at The River Cafe as stunning as you get in a three Michelin starred restaurant? Yeah, I'll leave that one out there...
Labels: Decadence Diners Dinner European Italian London Lunch Over £40pp Restaurants