Now that we're properly settled back in London town after our travels, we've gone back to keeping abreast of the latest pop-up restaurants - a trendy specialty of our home city in the summer and, in our opinion, the places to go for some of the most interesting food and drink in town. When C spotted a pop-up that she knew would appeal, she decreed that we needed to go on a 'date night' - and that Churchill's Port House, a Soho pop-up specialising in, er, port, would be the venue.

Here's where we take the plunge and admit that we're big fans of port: yes, yes, we know it's traditionally not the 'trendiest' of drinks, but apparently it's going through somewhat of a renaissance - which we're certainly all for. Forget the reputation: it tastes great, and isn't that the main thing? 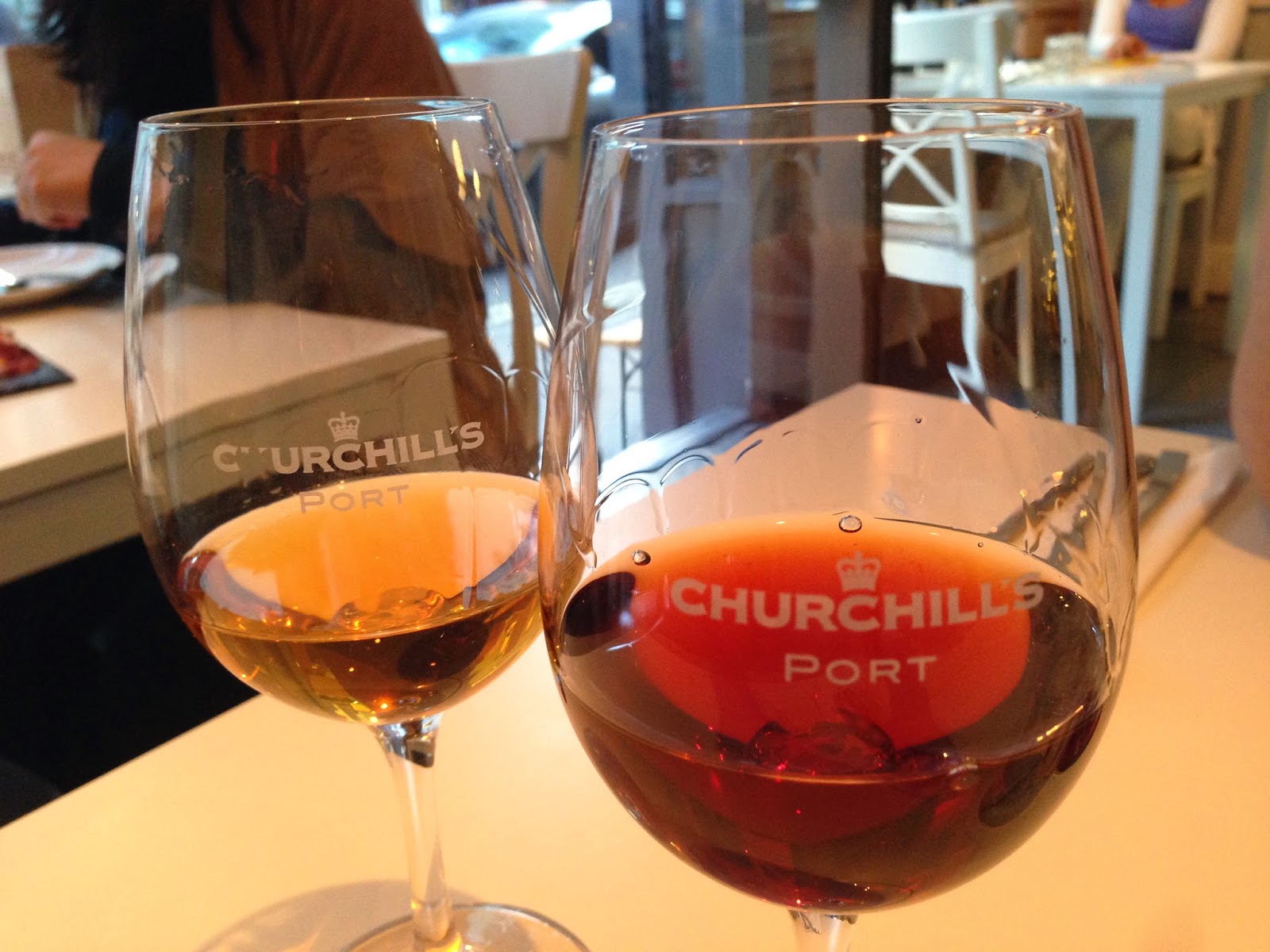 I've been drinking it since at least my undergraduate days as port was, bizarrely, one of the best ways to booze on a budget: my college bar sold its own branded port (pretty ridiculous, I know!) for something like £10 a bottle. I've been a fan ever since, and C, who discovered the stuff a couple of years ago, is also perfectly happy quaffing the stuff.

Churchill's Port House is located in a tiny unit on Greek Street, and while they do serve wine, the real stars of the show here are the fortified wines. They have a whole range of ports: white, tawny, LBV, crusted, and many others. For those of you who thought that port was just standard dark red stuff, this is the place for an education. 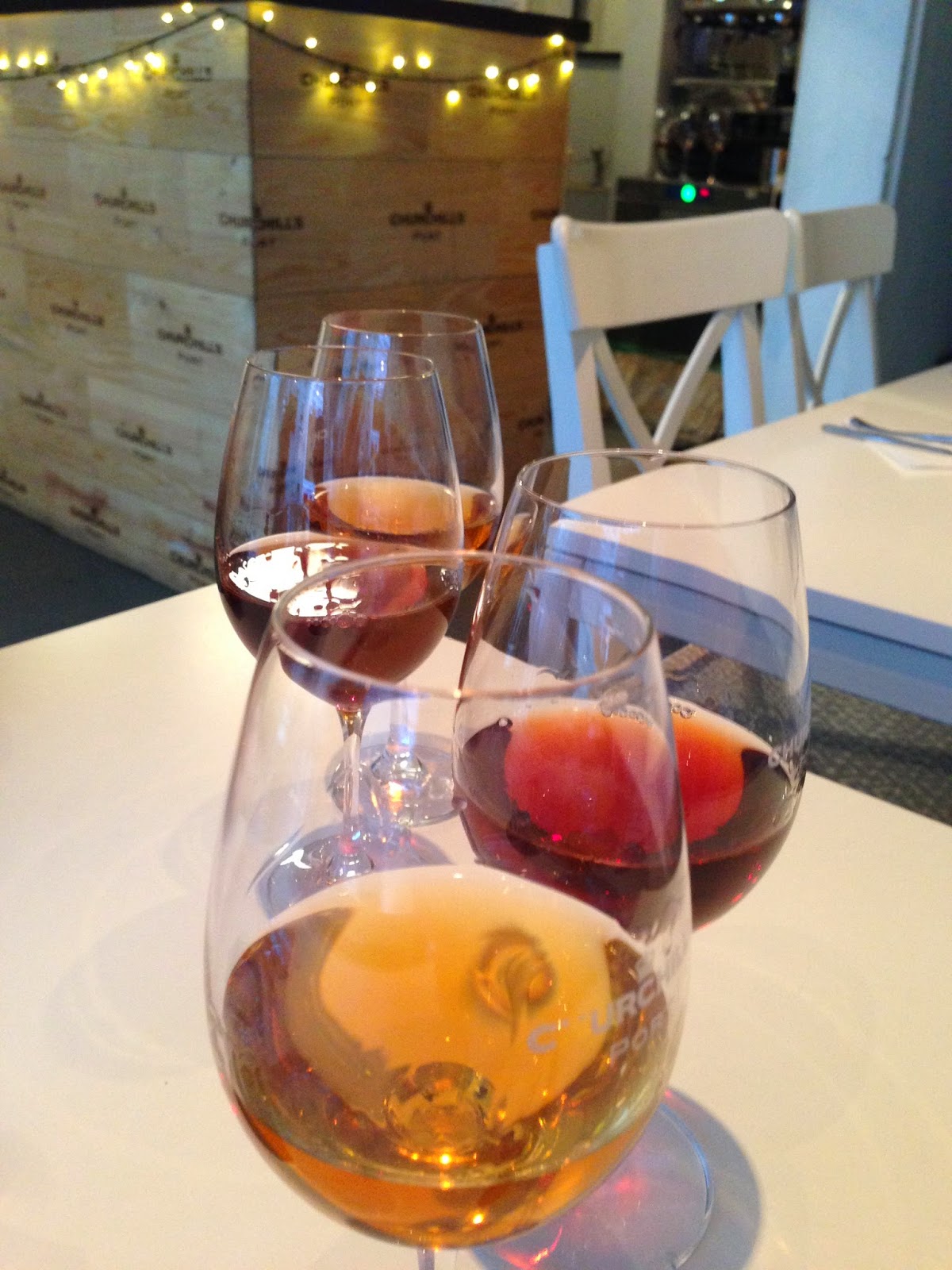 Each tastes quite different and comes with an explanation, in our case confidently delivered by Max, one of the two Churchill brothers who run the restaurant. Their spiels certainly worked on us: we went in with the intention of having one glass or maybe two, and ended up ploughing our way though eight glasses of port over the course of the evening. The ports are also paired with tapas, and although they were more than happy to give recommendations if we wanted, we picked out a few interesting bits from the menu ourselves. So, here's what we had...

First up was the white, at £6.50 a glass. White ports are served chilled and on a warm evening this was a great starting point - fruity and bright gold in colour. If you've never tried white port, do. We enjoyed this as an aperitif, which was recommended by Max, and it's a great way to drink it. 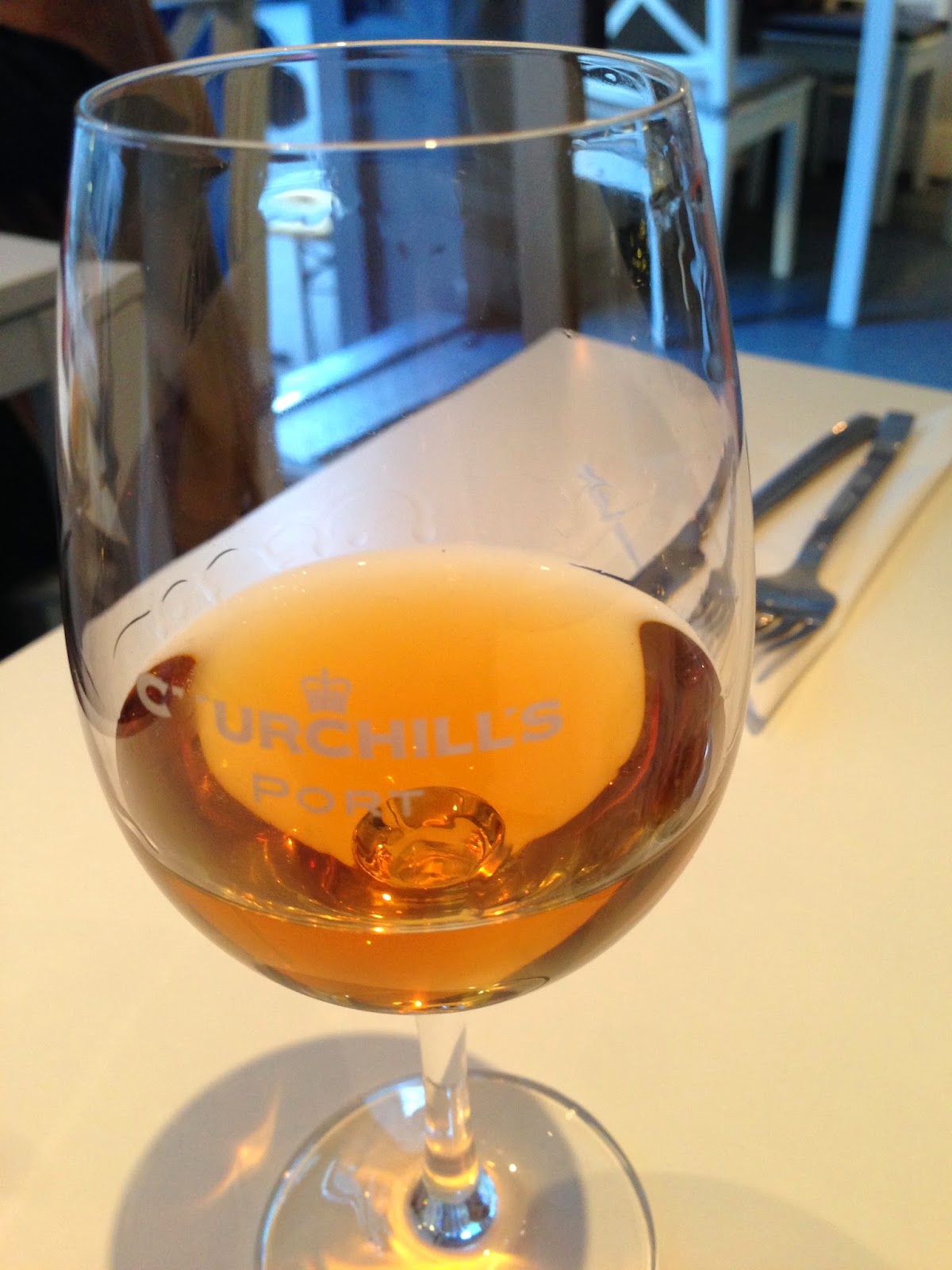 Next up was the 20 year old tawny (£10 a glass), which we tried on Max's recommendation as his favourite. It's quite pricey, as the 'second best' port they make (the best is the 40 year old tawny, which we're sure is brilliant, but the price of a glass made our eyes water a little) but was so good that it's worth every penny. A pale red colour, it's rich, savoury and has a touch of fruity, nutty flavours. We paired this with an Artisan cheeseboard (£12) - an obvious choice - which was great, with four different types of cheeses, some chutneys and grapes. As ever, the strong, blue and the creamy cheeses were our favourites. 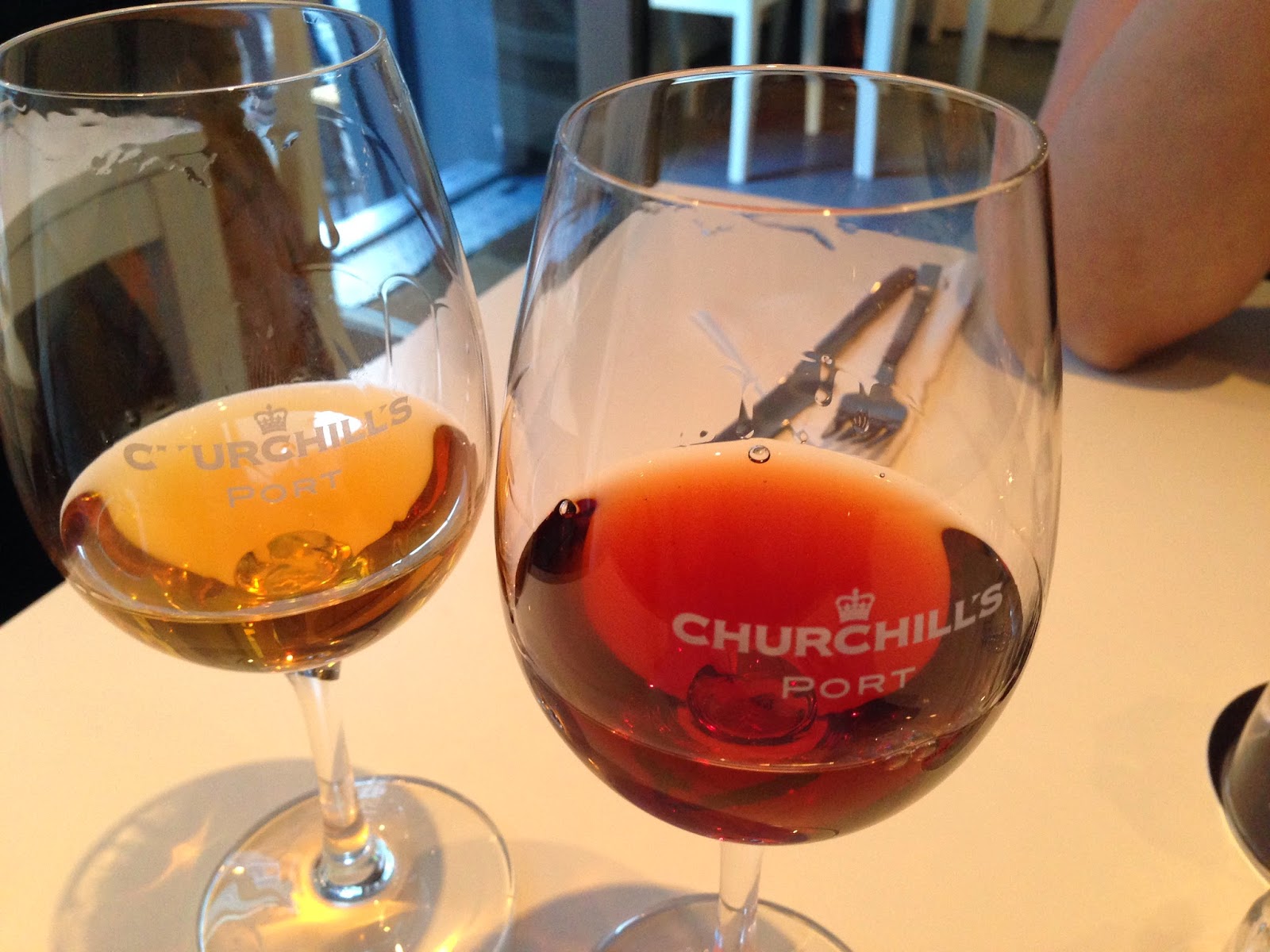 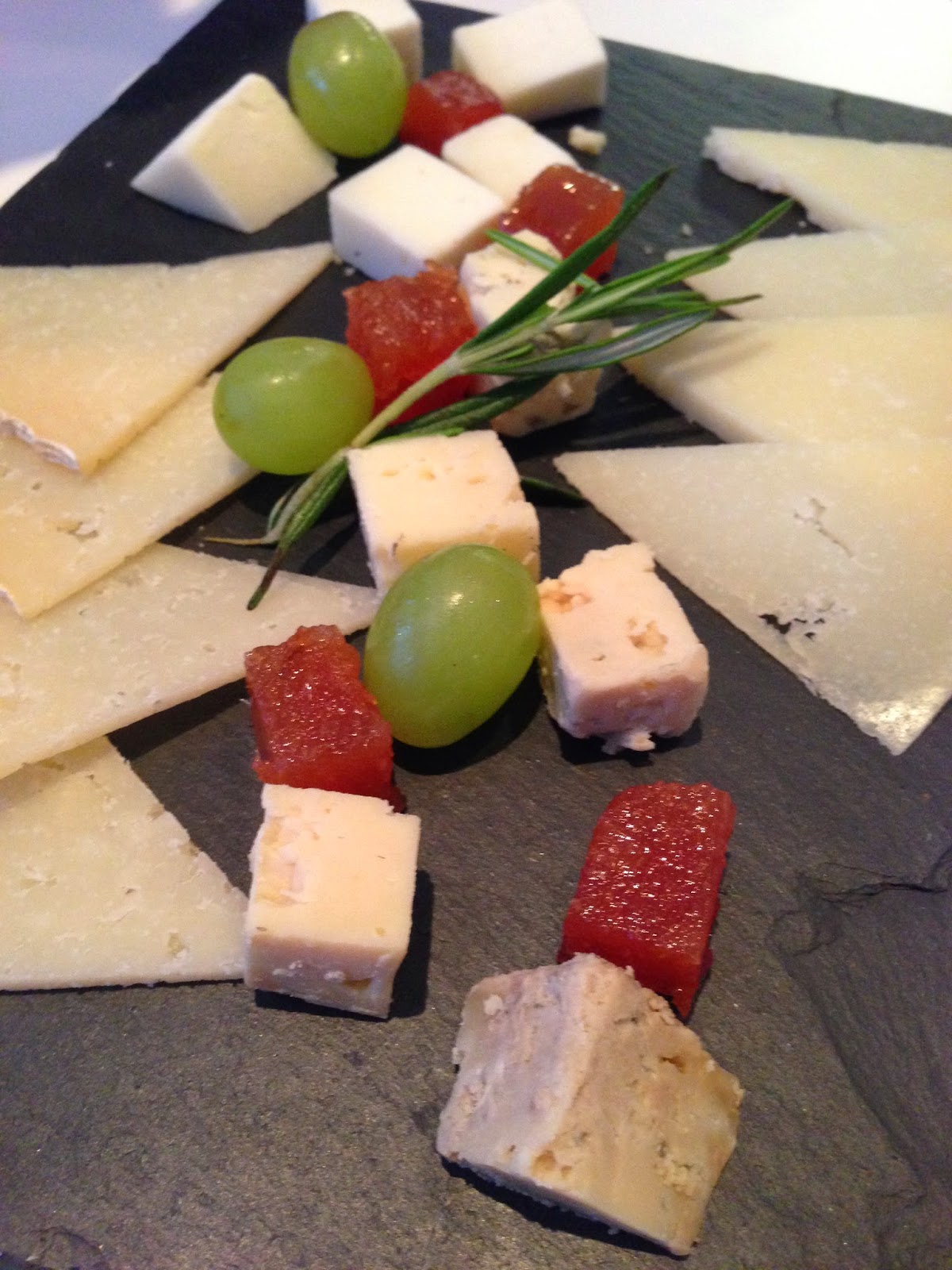 We then tried the crusted. Also excellent, and nearly as good as the tawny, we also found out that this is available at Oddbins for the bargain (in our view) price of £20 a bottle. A note here on crusted, as we weren't very familiar with it and Max kindly enlightened us: it's typically a blend of port wine from several vintages, sourced from grapes from a single vintage. It's typically served younger than vintage ports and is aged in oak casks before being bottled and then matured in bottle for at least 3 years. Essentially, it's a poor man's port, but no less delicious: it's full, dark and has a complex, fruity flavour. 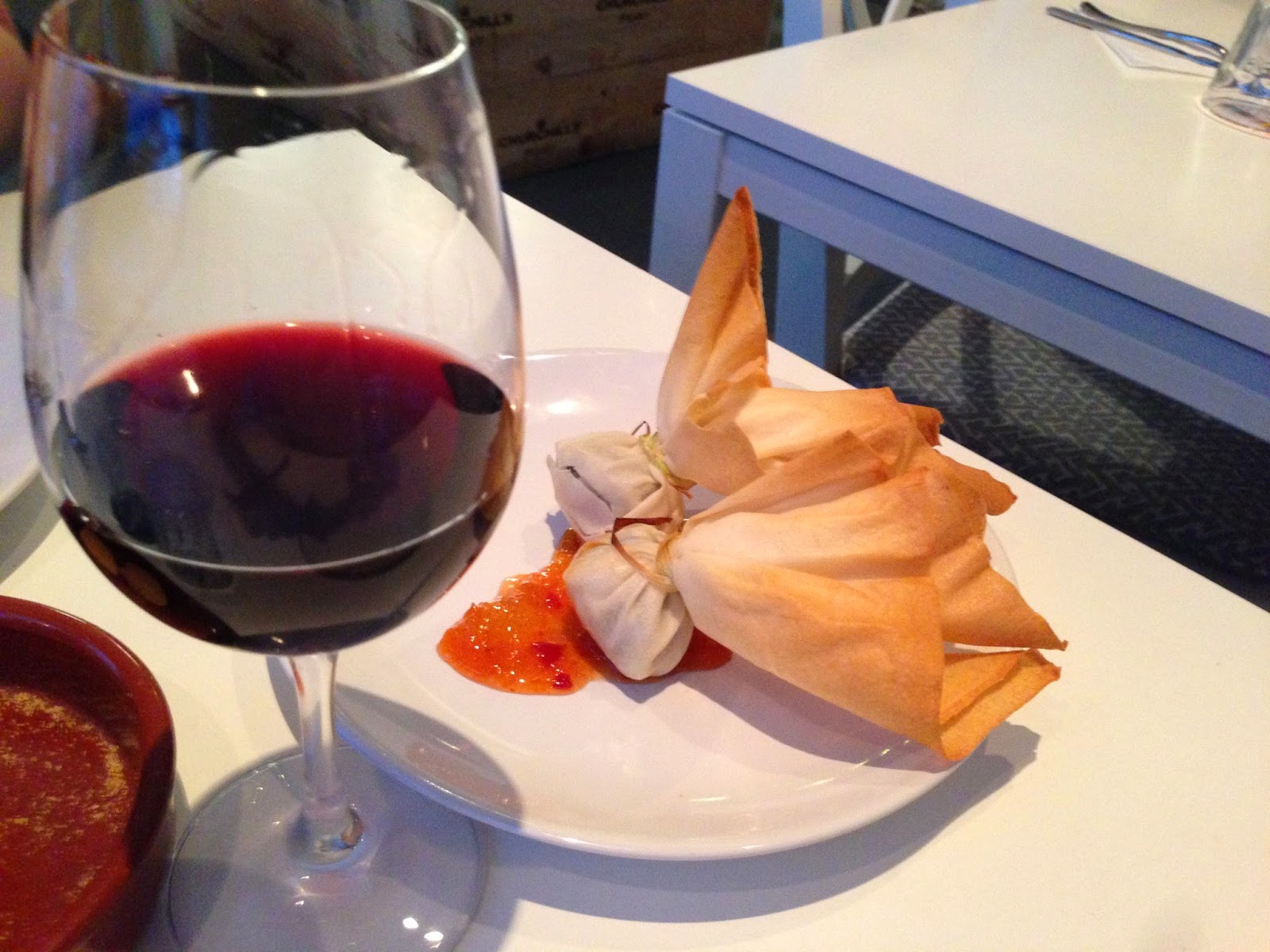 At this point, we ordered some more food: I went for the Pork Belly Confit (£8), which was succulent and flavoursome - although slightly on the fatty side - and C really indulged with Filo-Pastry Baskets with Morcilla Iberica, Roasted Chestnuts and a Mango & Chili Sauce (£7). Incredibly rich but incredibly tasty, the blood sausage was strong, dark and spiced and worked perfectly with the tangy sauce. 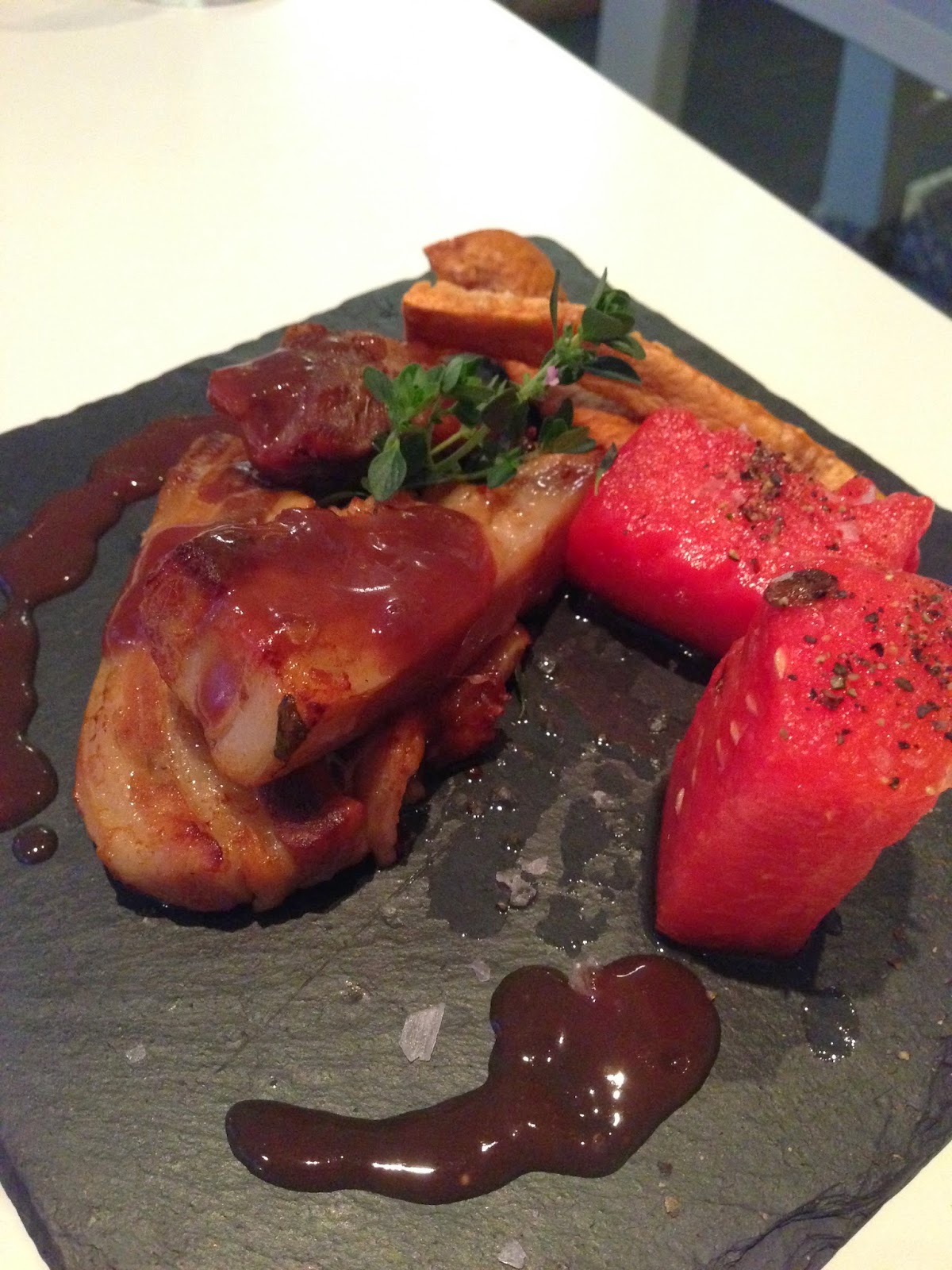 We finished with another glass of the 20 year old tawny - just amazing - and two Passionfruit Cheese Cakes (£5). Served in a trendy jam jar, it was rich, silky smooth and fresh: a brilliant dessert. 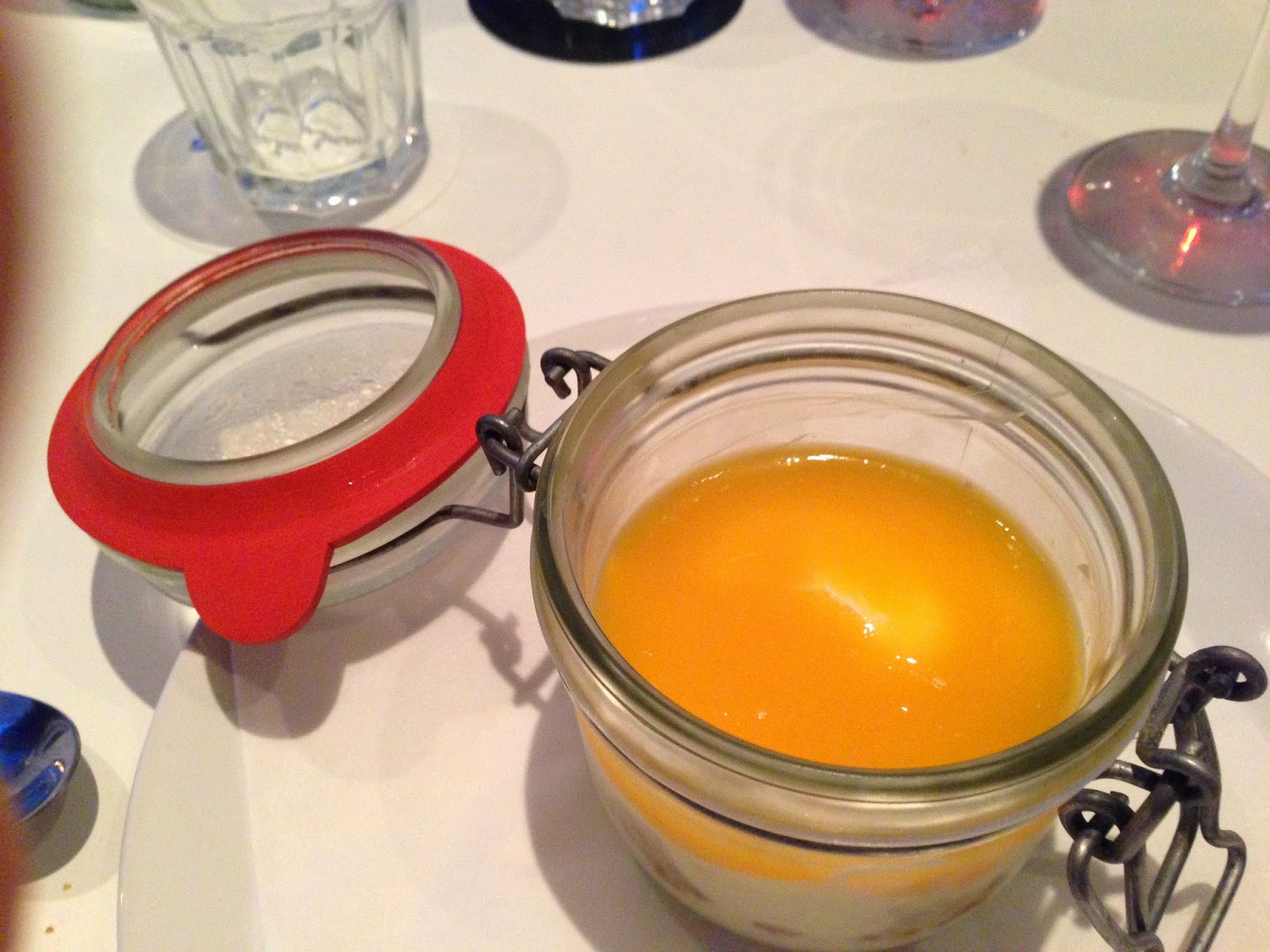 We rolled out of the port house rather the worse for wear, but extremely impressed with the offering. I rather think that 'date night' was a misnomer: read 'flimsy excuse to get trollied on excellent fortified wines' in its stead.

If you want to get your hands on the port, the boys are selling it from the port house by the crate, but sadly it's soon to be closed. Otherwise, Tanners and Oddbins stock it, and we understand that Churchill's will be beefing up its distribution in the UK in the near future, a development that can't come soon enough. Keep a lookout as well for Churchill's Port House to pop up again somewhere in London in the near future: it's a great night out.