Skip to main content
Labels
Posted by A September 03, 2013

Sorry it's been a while. Both A and C have been really busy: C has started a new contract at a major retailer, and with it being September, Christmas (in retail-land at least) is just around the corner. A's also been busy lawyering: burning the midnight oil regularly at has kept each of us from eating out together and indeed from writing any new material.

Against this background, it was a welcome break from the grind of tube-work-tube-sleep when we popped out with R (one of A's friends from law school) and a crowd of her Spanish friends (R is Spanish herself) for an impromptu Sunday brunch at Workshop Coffee in Clerkenwell. A had heard a good deal about Workshop since it's a place that his colleagues go from time to time for breakfast. However, he'd never had the opportunity to go. When R suggested it as a venue, he and C were glad to give it a try.

The good news is that Workshop more or less lives up to the hype. There's been a lot of buzz about this place since it opened a couple of years ago. The coffee is generally very good and clearly the baristas are well trained: the cappuccinos came with beautiful ferns and hearts worked into them and A's "aeropress" (emphatically not a filter) coffee was clean tasting (if a bit weak) and cleverly served in a jug and tea cup on a wooden platter.

The food too, was very good: C opted for the baked eggs (£9.50), which came up still hissing and steaming in their own mini-saucepan. Packed with flavour, they oozed with bubbling cheese and chorizo. As a fan of cheese and of sausages, C was extremely pleased.


A too enjoyed the kedgeree (£12). This was neatly served with a perfectly spherical poached egg and crispy shallots. It was also extremely flavoursome: the creaminess from the milk and poached egg was offset by a strong kick from the spices. Overall, the combination was excellent. 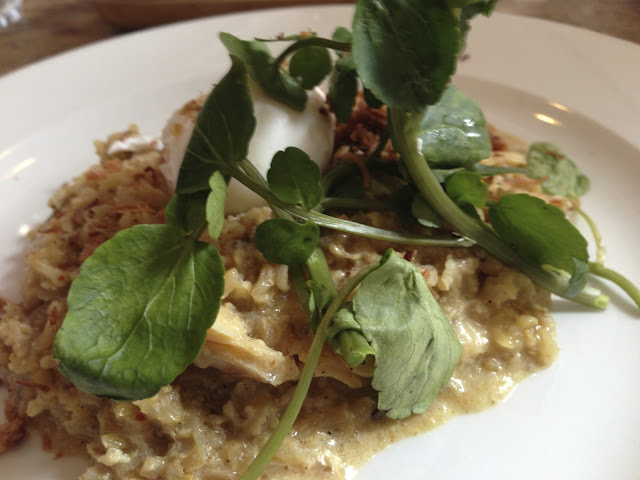 Despite the quality of the food: Workshop Coffee is not without its shortcomings. Unfortunately, it slightly missed the mark on knowledge of coffee. By way of example, A asked for a filter coffee be informed that a Workshop only do americanos or aeropresses. Being rather set in his coffee drinking ways (filter all the way), A asked what an areopress was: A was then treated to chapter and verse on the virtues of the areropress, and how superior it was to the usual drip filter/French press. For the privilege of drinking an aeropress, one is expected to pay top dollar.  However, on asking the server for a bit more information about the coffees actually offered at Workshop, knowledge about the coffee was sadly lacking, as the server had to scamper off to ask the baristas for even the most basic information. Now, if you are going to charge a hefty whack for what is basically filter coffee, it's also necessary to provide some spiel about the blends, their provenance, taste profile, fair trade credentials and and so on. In the absence of said spiel, the sense of getting fleeced was acute.

This leads on to the second criticism: value. Brunch at Workshop equates to the price of a modest dinner out: a brace of hot drinks, a couple of softies and two mains saw A and C drop £50 or thereabouts. A may just be stingy, but he still thinks of brunch as being a relatively cheap option. This just isn't the case at Workshop. Moreover, with the portion sizes at Workshop, don't expect to leave full. A felt particularly hard done by as his kedgeree - pretty much the most expensive thing on the menu - was gone in seconds. At more than £1 per spoonful, this did feel galling. Don't get us wrong, we don't have any complaints about the quality of the food, we just wish that there was more of it on the plate.

Despite our gripes, A and C had a good time: Workshop Coffee really is a lively place and a pleasant option for a light meal friends: a good time was had by all. Just make sure you go at the beginning of the month when you're feeling flush!
Labels: Breakfast Brunch Cafes European London Under £30pp