Posh Picnic from Melrose and Morgan

We do love a good picnic - and especially when the weather's as good as it's been recently! When we got an invitation from fancy grocery shop Melrose and Morgan to try out their summer picnic, it was an offer we really couldn't refuse.

Melrose and Morgan have been one of our favourite foodie shops in north London for a while; they're located just down the road from where A grew up in Hampstead. We've popped into their modern take on an old-fashioned English provender a few times, and have blogged about them before, and in particular their rather excellent sweet potato pie. Mmm... 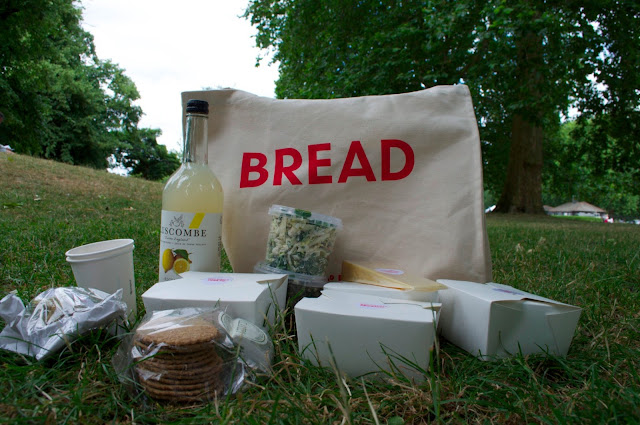 To celebrate summer, Melrose and Morgan have launched a picnic for two, and it was this that we road tested a few weekends back. We popped into their Hampstead shop on a sunny Saturday morning to pick it up, and were presented with a reusable canvas bag with "Bread" on the front of it (which we love) filled with all sorts of goodies. We promptly took it to the local green space (guess where) and settled down to munch.

As tempted as we were by the sweet things, we were very good and tucked into the savoury selection first - all of which was delicious. C cooed with delight when she tasted these fresh British Isle of Wight tomatoes, which she made very short work of. Oops. 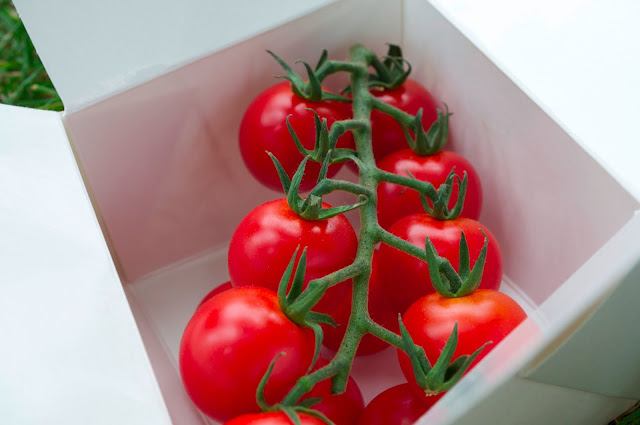 Next, we shared out two generous boxes of veggie goodness. The first was a tangy and vibrant salad, packed with red cabbage, celery, raisins, seeds and herbs, which went down a treat with both of us. The other was a Green Slaw, which C approached with a bit of apprehension – she’s not a ‘slaw’ fan in general as mayo’s really not her thing, and the thought of it usually makes her shudder a little. 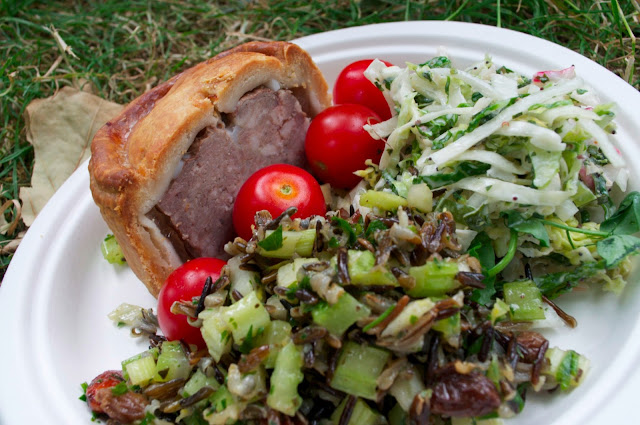 Apprehensions aside, though, she tucked in and was actually pleasantly surprised; the presence of mayo and vinegar in Melrose and Morgan’s version was pretty limited, and the raw cabbage, leaves and other green things alongside it were tasty. A enthused about this: as a slaw fan, he loved it, although we both did agree that the first salad did just win out of the two in terms of taste and tang. 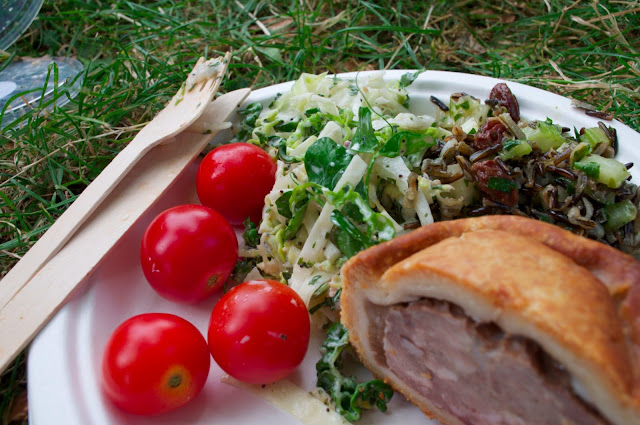 Because a picnic that’s 100% healthy would be a little boring, we also tucked into a hearty Mrs Kings Pork Pie alongside our greens. This went down a treat with both of us: there wasn’t too much gristle or fat which is what always puts C off with pork pies, and the pastry was crumbly and buttery (although, if we were really picky, we’d say just a teensy bit too thick – but this is hardly an inconvenience). 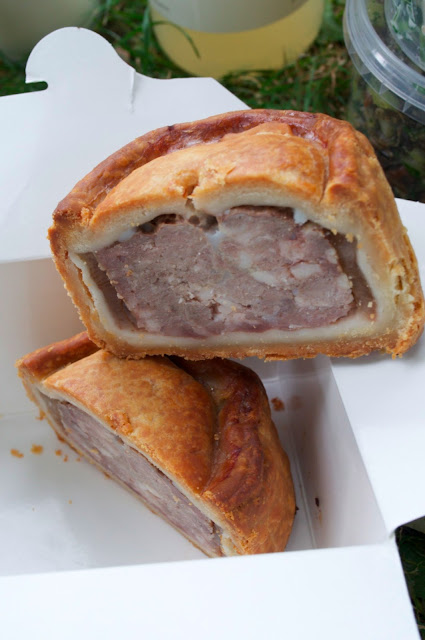 Next came the desserts: the bit that C was, of course, looking forward to the most. We tucked into a punnet of fresh Chegworth Valley strawberries which were large, juicy and really tasty – we were soon fighting over the last few. 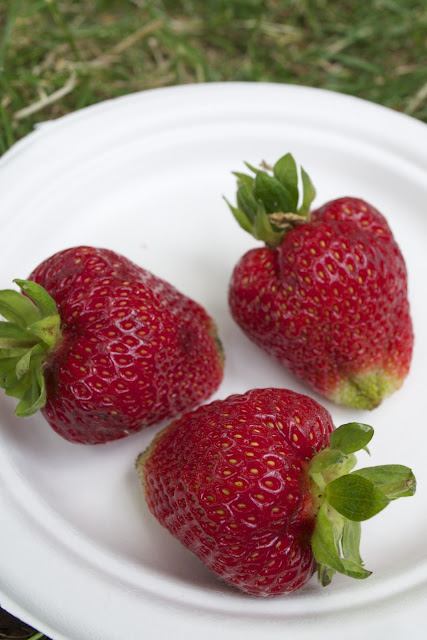 Pretty full by this point, we managed to squeeze in some room for the homemade Chocolate Brownies. A tried his first, and the eye-widening expression and “Ooh” which escaped from his lips was enough to make C rush to try hers. They were dense, moist and crumbly, and ever so chocolatey without being overbearingly so: really very delicious. A went so far as to say that they were some of the best he’d ever tasted, and pretty much comparable to the delicious We Love Brownies we tried a few weeks before, which we had crowned The Best Brownies Ever. Seriously good. 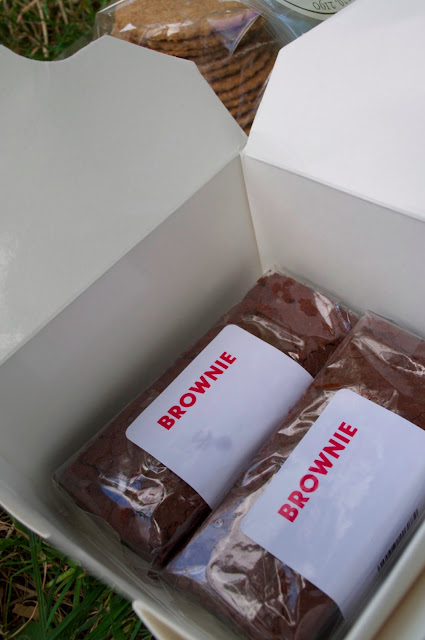 Finally, after a bit of a break to let our food go down (there’s a lot of food in this picnic – don’t say we didn’t warn you), we couldn’t resist trying the Sally Clarke Oatcakes and the hunk of Montgomery Cheddar. It might have been mentioned a few (many) times on here that C loves cheese possibly more than anything, and she was cooing with delight about the Cheddar, which was fresh, mild and moreish. She’s usually one for a stronger or smellier cheese, but as far as mild cheddars go this is pretty much the best you could get. The cheese and oatcakes got a big thumbs up from A too, and we tried these with the tangy Gardeners Relish – a mix of courgette, mustard seeds, turmeric and a touch of curry powder – which really enhanced the flavour too. 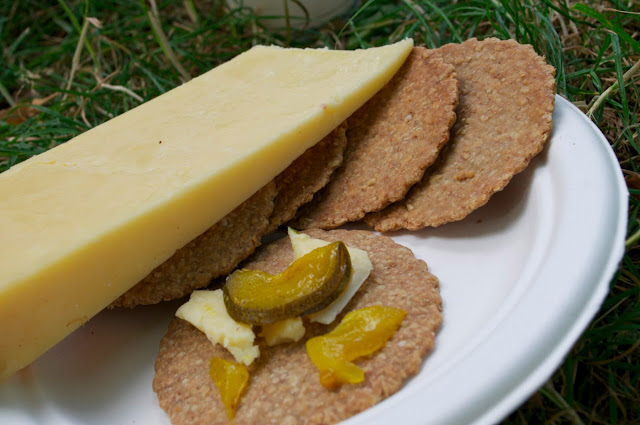 All this we washed down with perhaps the best lemonade we’ve ever tasted (and C, who happily can suck a lemon, has tasted a LOT): Luscombe’s Lemonade. It was oh-so-sour and sweet at the same time, and didn’t dry your mouth out as so many lemonades have the tendency to do. Absolutely delicious.

We left our green space contented, full and happy in the knowledge that we wouldn’t need to eat again for the rest of the day. A picnic from Melrose and Morgan costs £39.95, and although this may seem a little pricey, we’d say that it pays off for a feast for two like this and for the quality and freshness of the food and drink on offer here. After all, it’s really only the same price as a £20-a-head meal out, and in the summer this makes a refreshing alternative to dining out in a restaurant. We’d definitely recommend giving it a try!

To order a picnic, pop into one of their shops – they’re in Primrose Hill or Hampstead – and allow 24 hours notice for delivery. Thank you for a feast, Melrose and Morgan!


Featured Content: A and C did not pay for the picnic for two. A and C enjoyed picnic for two courtesy of Louisa at Melrose and Morgan and did not accept additional payment for this post.
Labels: British Cheese Chocolate Decadence London Other Eats Picnics Pies Salads Seasonal Sweet Tooth