Despite talking about it for quite some time, C and A had never quite got around to visiting Brighton - a town on the south coast where C lived for four years, and perhaps her favourite town in the UK (along with London, of course). A has noted that people who live, or have lived, in the Sussex seaside town have a kind of visceral attachment to the place, and a strong sense of loyalty to it - and C would pretty much have to agree with his statement. It's a great place: liberal, open-minded, individual, arty, bustling, vibrant, with a beach to boot. 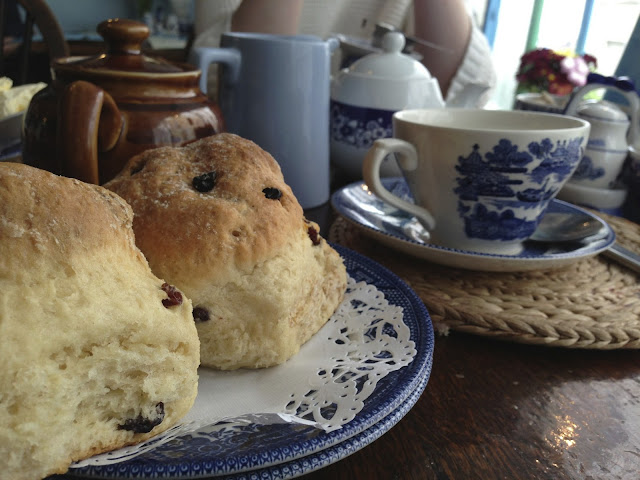 Another great thing about Brighton is the food: it's known as "London by the sea", and some of the food here certainly strives to meet the standards set in the capital. There's a big veggie community here, and restaurants like Terre a Terre, Food for Friends and Iydea are great places to start for a culinary adventure in the place. There are also a multitude of other great places to eat, so many that we can't possibly begin to name them - but we started off our day in Brighton with lunch at Bardsley's in London Road. Brighton visitors take note: don't be fooled by any of the tasteless fish and soggy chips on the pier - go to Bardsley's for proper seaside grub, served up just how it should be. But more of that another time. 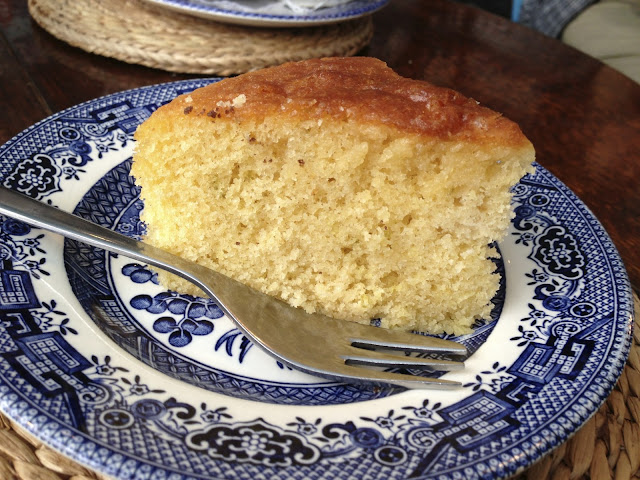 After a wander around the town and a touristy trip to the 2p machines on the pier (A, in his middle class way, expected his enjoyment of this to be deeply ironic, but actually ended up loving it - much to C's amusement), C took A to her favourite tea room in Brighton - The Mock Turtle. 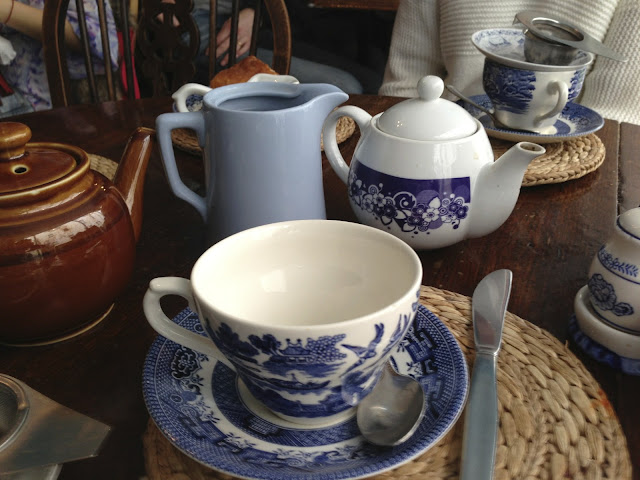 Named after a character in Lewis Carroll's Alice's Adventures in Wonderland, stepping in here is a bit like stepping into another world, or time. It gets very busy around teatime, so head there by about 3pm if you want a table on the weekend - but it's well worth it. It's English tea room kitsch galore on the inside: small wooden tables and chairs with straw placemats and frilly white tablecloths and napkins. The walls are a vibrant Victorian blue and wooden dressers display delftware, which everything is served on. 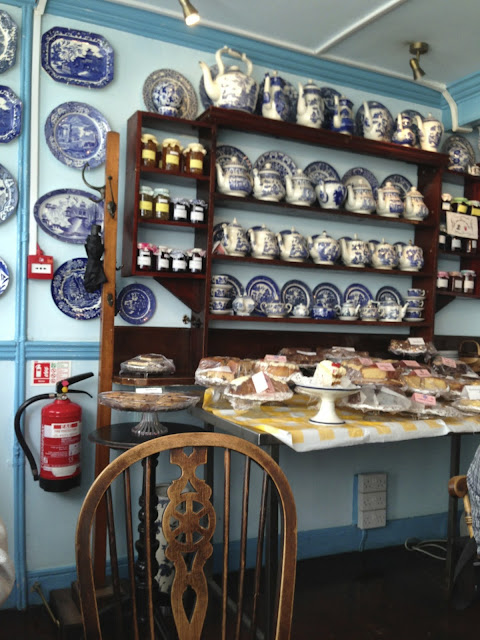 Aside from the décor, which is brilliant (although perhaps not something you'd want in your own home), the best thing about this place is the food and drink. The tea itself is superb: fresh, loose leaf teas, and a whole range of them too. C was feeling a little unadventurous, and nostalgic for what she always used to drink in this place, and so went for the brilliant afternoon blend which always has a real depth of flavour. A went for a green tea (inspired by our recent trip to China, no doubt) which he was also cooing about. Both teas were around the £2.50 mark, but that's for a limitless pot. 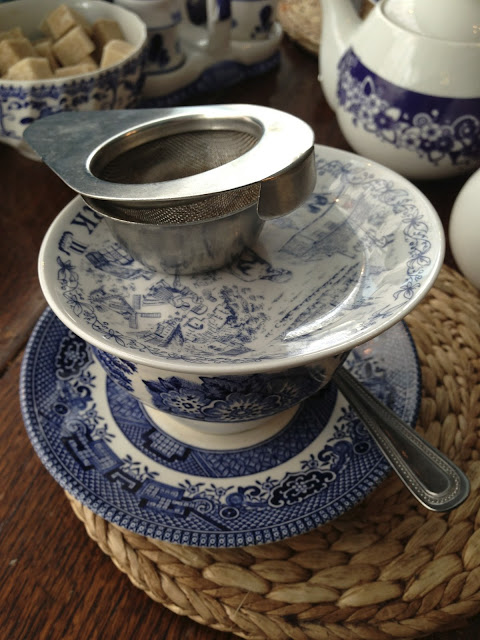 There are a vast selection of cakes and sweet breads in The Mock Turtle, all of which are displayed in the window and on the huge dresser to one side of the small café. Be prepared to spend a good few minutes trying to choose what you want - but for a sure bet, their Victoria Sponge and their Lemon Cake are always excellent. This time, C went for a Lime Cake, having never tried one before, and was pleasantly surprised: dense, moist and slightly crumbly all at the same time, it had a real zing from the citrus that was a really great touch. 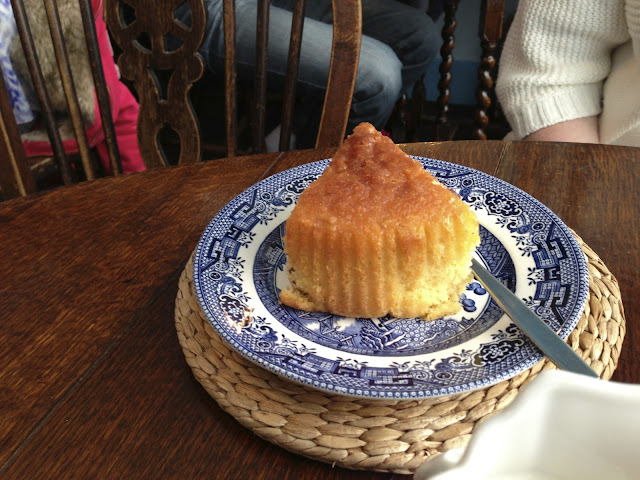 A decided to really push the boat out and go for the afternoon tea. However, his eyes nearly popped out of his head when he saw what he'd ordered (oh, and only a couple of hours after fish and chips): two huge scones with jam and cream. C did try to warn him... 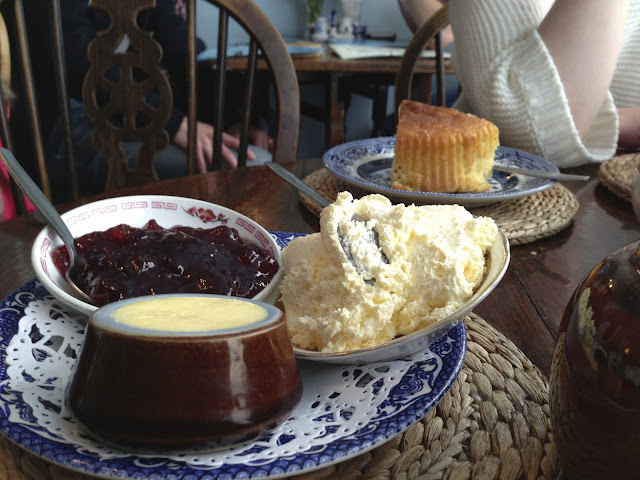 Unlike C, though, A's eyes are not bigger than his stomach and he made short work of it all. He commented that the warm scones were some of the best he'd ever had and was surprised by how generous the portions were in the £6 deal. 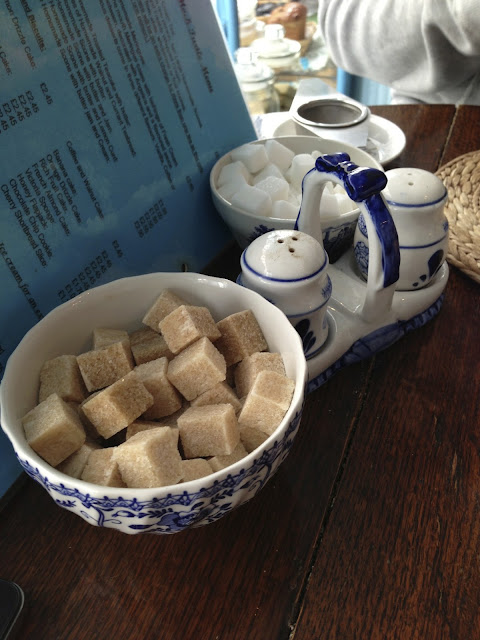 The Mock Turtle is a bit of a secret: it's tucked down a side road, it has no website, and there are a lot of locals in there as well as the odd tourist group who chance upon it. We'd advise you to go, but would stipulate two caveats: one, go before 4pm on a weekend and two, sit upstairs. There is a downstairs, but it's a little gloomy, and just doesn't have the same feel. And once you're there, kick back and relax: this is a great place, and one of C's favourite spots to relax with tea and a book.
Labels: Afternoon Tea Brighton British Cafes Cake Further Afield Sweet Tooth Tea and Coffee