Toad in the Hole, or REAL MAN FOOD!

C's school friend C and her boyfriend M (who are one of the more regular couples who feature on Slightly Peckish) came over a while ago for a meal. M is an Aussie, and while A and C are not the types to pander to national stereotypes, we do know that M is partial to a meal which features meat. Fortunately, A happens to be the proud owner of the Ginger Pig Meat Book.  This does what it says on the tin, and tells the reader lots and lots about meat: how it's cut, how its cured, what time of year to eat certain types of meat and most importantly how to cook it when it's in season. 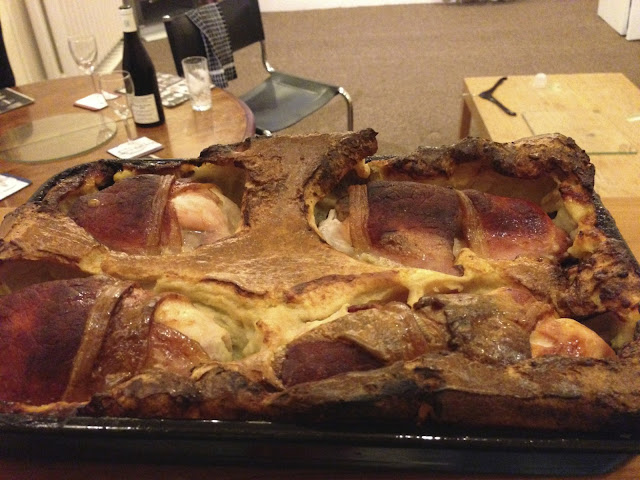 One of the April specials was toad in the hole. Though we did this in May, it was the first bank holiday weekend and April was only just finished so we decided that it was sufficiently seasonal to have bash at making them.  We are glad we did: the results were great.

This recipe is simple, but it really pimps up the toads. Instead of using sausages on their own, you take a chicken breast, score it deeply, push a sausage into the cavity and then hold the sausage in place with bacon. The recipe says just about any sausages will do, but we had some fairly good quality lincolnshire ones which we held in place with dry cure bacon. You then bake the toads for a bit until they are beginning to cook through.

While the toads are beginning to cook, make a simple batter with milk, eggs and flour - and this you pour over the toads and leave them to cook until the batter has risen and is beginning to go crispy, and the chicken and pork is cooked all the way through. We found this took about an hour on about 180C.

The results were great, especially when served up with a bit of mash, some onion gravy and a side salad. While not hugely technical for a dinner party, it made for a very satisfying supper and there were approving noises made all round. We would whole-heartedly recommend this as a filling simple Sunday lunch or a weeknight supper - and given that the ingredients are all fridge and storecupboard staples, it won't break the bank either.
Labels: British Dinner Recipes Eating In Recipes Savoury Recipes Seasonal