C is a huge cheese fan, and this is no secret. Regular readers will understand how excited she was, then, when she heard via the Twitter grapevine that Southbank - which hosts a whole range of interesting foodie festivals year-round - was holding a Cheese and Wine Festival a few weekends back. She promptly informed (yes, that's the right choice of word) A that they would be going the following weekend, and he really had no choice but to agree.

After a rather tiring yoga session at London Bridge on a Saturday morning, A and C trundled the short distance to Southbank and had a poke around the stalls. It was a bit early for wine (and they were a bit too dehydrated for it after an hour and half in what is effectively a sauna), but they had a good browse for cheese. As well as a pretty large collection of stalls here, there were also events taking place all weekend in a large marquee at a small extra cost - such as workshops, quizzes and demonstrations. 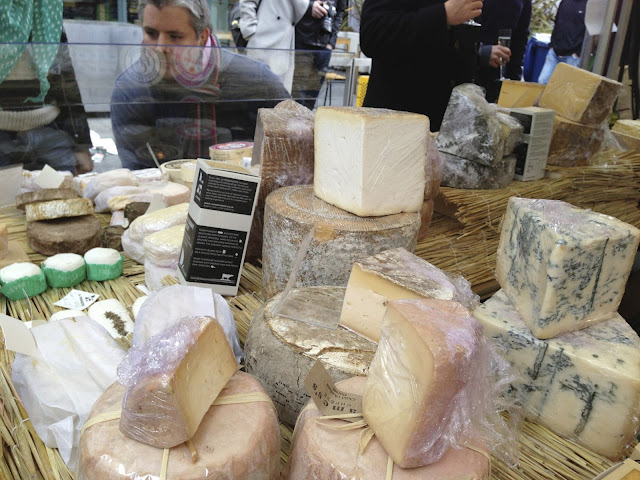 We gave the marquee a miss this time, though, and just went for a browse. There was a pleasingly huge range of cheese - with stalls selling anything from common choices like Cheddar and Red Leicester to Brie and Camembert, to more interesting, unusual stuff like Cornish yarg and Comte, a French cheese made from unpasteurised cow's milk.

We were having friends over for dinner in the evening, and as we had a rather simple and small dessert planned (cookies) we thought we'd splash out with a cheeseboard and a bottle of bubbly as a final course. After much deliberation - read, taste testing - we opted for a few artisan cheeses from La Fromagerie. A really lovely London-based cheese shop, they have branches in Highbury and Marylebone and are really worth checking out. 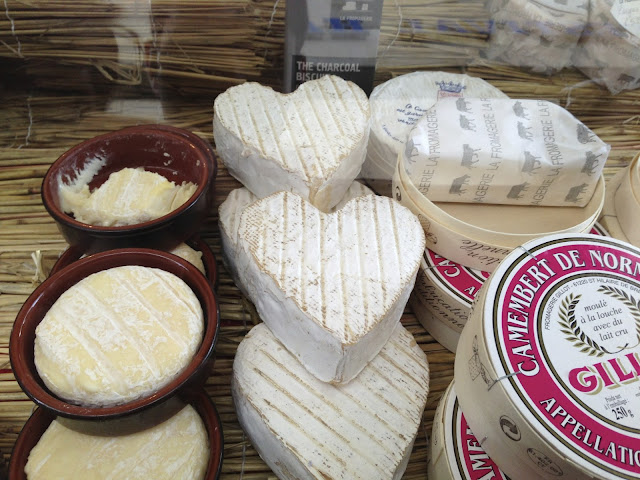 We chose to buy a Cornish yarg, a semi-hard cow's cheese made from the milk of Frisian cows. It was first made in 1983, apparently, and was A's recommendation as he'd had it before and is a real fan. It's fresh and creamy, and really very easy to eat in large quantities.

We also opted for a creamy goat's cheese and one further French cheese, which was a good bit stronger and had a real tangy kick. For the three cheeses, we paid under £10, which we didn't think was too bad all things considered. 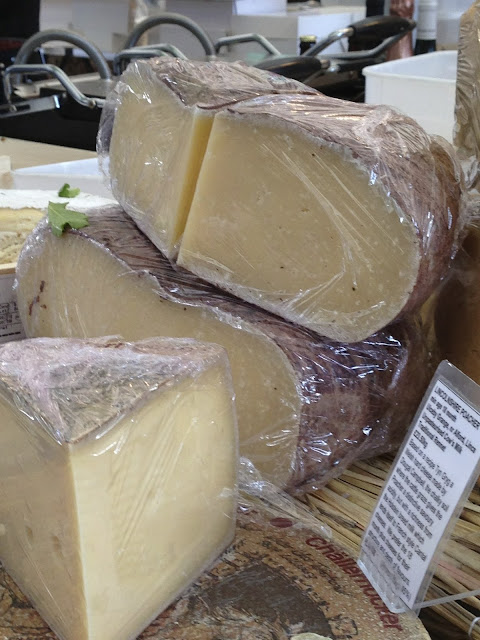 To finish it all off, we popped to another stall and grabbed the biggest loaf of sourdough we'd ever seen for an expensive - but justified - £6. In the evening after dinner, we served it up as a cheeseboard as planned - and are pleased to say it went down very well with our friends C & M (C being an aforementioned school friend of C's, and M being her boyfriend - we think this is his first appearance on the blog).

All in all, a success - we'll definitely be going back to the Cheese and Wine Festival next year!
Labels: Cheese Food Festivals London Wine