A hadn't met up with his friend R for ages, and after a trying and failing to fix a date for a while, they finally met up in the West End a couple of weeks ago.  After shooting the breeze over a mug of coffee in a café towards the top end of Tottenham Court Road, the two of them headed off for a spot of lunch at the hyper-trendy Honey & Co, a place which despite its tiny size, is making big waves amongst the London foodie community. 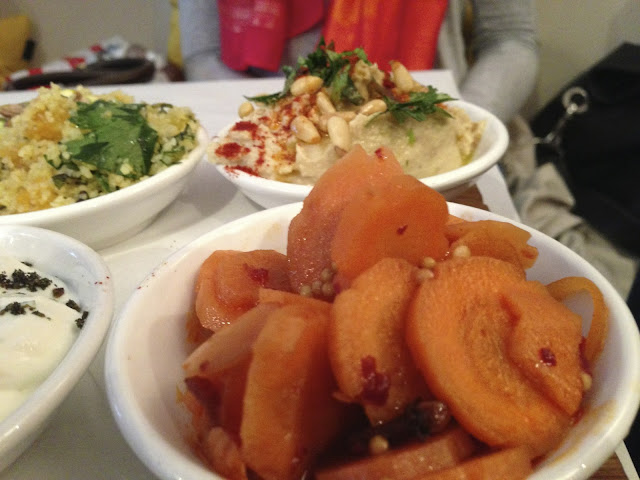 Honey & Co is a Middle Eastern café run by an Israeli couple Sarit and Itamar, who have returned to their roots after spending some times working in some fairly fancy London establishments. The couple live to eat and adore making the food of their childhood, and this comes across in the food. The menu is not the widest, but it's carefully constructed and absolutely delicious. 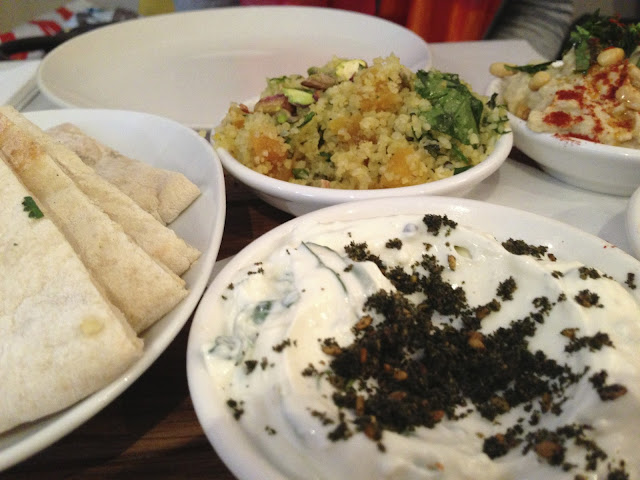 A and R, it turns out, have pretty similar tastes in food and they ended up ordering identically. To start, they ordered the mixed mezze platter to share. The platter was a pretty varied lot: a tabouleh salad, labnah cheese, marinated carrots, hummus, a couple of fritters olives and a few bits of pitta bread. The flavours on the platter were nothing short of incredible. To go through a few of the highlights, the carrots were shot through with a pungent blend of spices and a little chilli kick, which was absolutely great and the labnah was light and creamy and jazzed up with with a really lively zat'ar. The star of the show though had to be the hummus, which A reckons could be just about the best he'd ever tasted. Perfectly smooth, bursting with chickpea and sesame flavours and wonderfully aromatic, he's barely shut up about it since. 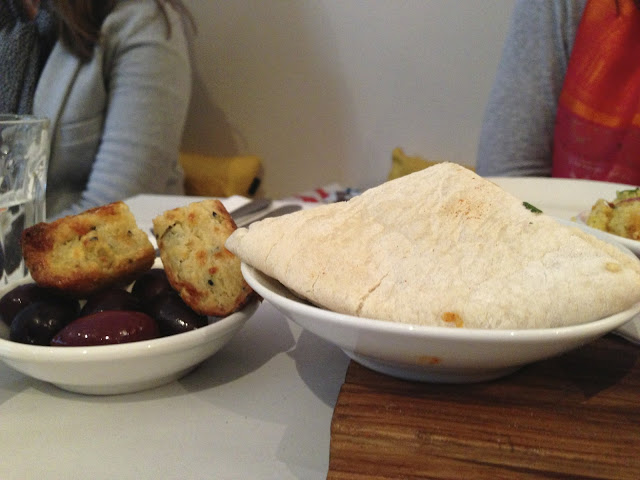 For main, three lamb koftas with aubergine purée and white bean salad arrived. Like the main, the textures and flavours of this dish were great. The meatballs were beautifully soft and moist, and practically melted in the mouth. The accompanying vegetables were also extremely tasty, and the the texture combinations worked really well. Both A and R were extremely complimentary about the dish (after the silence which fell while they actually ate the food!) 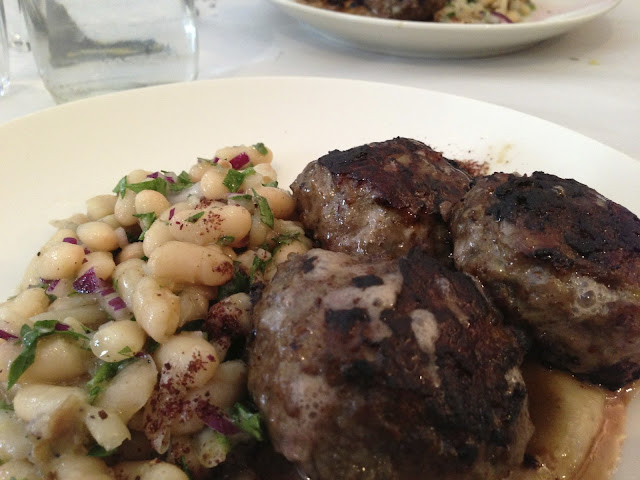 A and R ordered a refreshing mint tea, and chattered over it for a while. As we'd booked for a particularly late sitting (the place is tiny so they keep you to a fairly strict timetable most of the time), we were able to keep the table and soak in the atmosphere. When there, the place was full of Israeli families out for noisy lunches, which only added to the authenticity of the place. 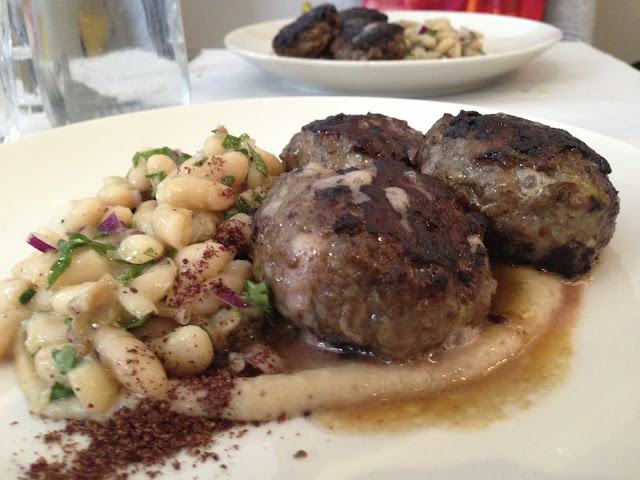 While the food was excellent, there are a couple of areas for improvement. First, A was a bit disappointed at the amount of bread that came with the starter: four wedges of pitta was inadequate for the quantity of spreads, and it was annoying that the establishment charged a quid for an extra serving.

A was also surprised at the length of time it took for the bill to arrive: A and R waited at least 30 minutes for the waitress to come over with the credit card machine. Given that the place has half a dozen tables, this was an excessively long wait, especially given that most restaurants with this few tables actually want you to pay so they can free up the table space for other customers.

Overall though, these are minor gripes. The food at this place is absolutely outstanding and A recommends a visit. Just make sure to book as Honey and Co is one of the area's worst kept secrets!
Labels: Brunch London Lunch Middle Eastern Restaurants Under £30pp