One thing that’s for sure: in-between working 13 hour shifts at work and sweating copiously in Bikram yoga sessions (our new hobby), we haven’t forgotten about food.


A few months into 2013, we’ve found ourselves left with the odd photo here and there of food we couldn’t resist snapping at the time, and which is too good not to share, even if briefly.


Sometimes we don’t have enough snaps of a restaurant visit to warrant a whole blog post, but it’s a bit of a shame when this means that it doesn’t get a mention at all – especially when it’s well-deserved. Here’s a new little project, then: every quarter, we’ll post a brief round-up akin to an “and the rest” – other places we’ve visited over the past few months and want to shout about. Expect a miscellaneous bunch.

Here are our Q1 snippets of great food:


C visited Del Aziz with her old school friend C a while back (aforementioned on the blog here). Del Aziz is a London-based small chain, which sells itself as “showcasing the very best of the exotic Eastern Mediterranean and North Africa”. The Cs popped along to the Southwark branch, and were pleasantly surprised by the food here. 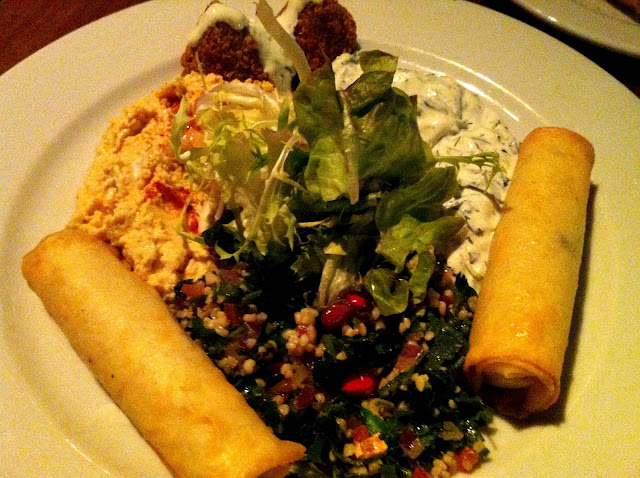 We started our meal with a Vegetarian Meze Platter (£14.95), which consisted of hummus, dolma, tabbouleh, falafel, cheese borek and tzatziki. The standouts really were the cheese borek (salty, slightly gooey and a little greasy – but very moreish) and the hummus, which was excellent, and gobbled up in no time. For a main, C’s friend went for the Chicken Shish – a traditional choice, she reported back that it was a good one, marinated with saffron and onions, and the portion size was certainly generous.


C herself went for the minced lamb spiced with saffron, garlic & onions, which was served with grilled tomatoes & finished with sumac, and she enjoyed it with saffron rice. In all honesty, for what sounded like such an interesting dish, she was a little disappointed: perhaps it’s just that she’s used to quite authentic Perisan food in places like the Mahdi, but she was expecting it to be bursting with flavours and aromatic herbs and spices. Instead, it was pleasant but a little on the bland side: pleasing, and recommended, but not outstanding.


With a bottle of wine to share, the meal came to around £40pp – C found this a bit pricier than she would have liked, and in all honesty thought the food didn’t warrant the price tag.


A and C made an impromptu visit to Little Bay a few weeks back, after passing it at Farringdon and C enthusing that it was not only cheap but also good. She’s been to the Croydon branch a few times, and the Farringdon outlet also lived up to expectations: we had starters, mains and a glass of wine each for under £30, which we think represents excellent value. 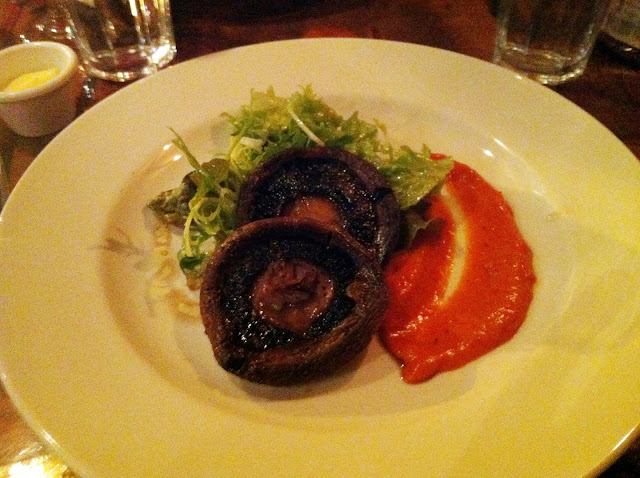 A opted for Baked Mushrooms with Garlic & Thyme Filling and Red Pepper Finish and a burger for main, both of which he made very short work of and enthused about, particularly in light of the price tag associated with them (a reaction C has often witnessed at Little Bay – people are genuinely amazed at the affordability). 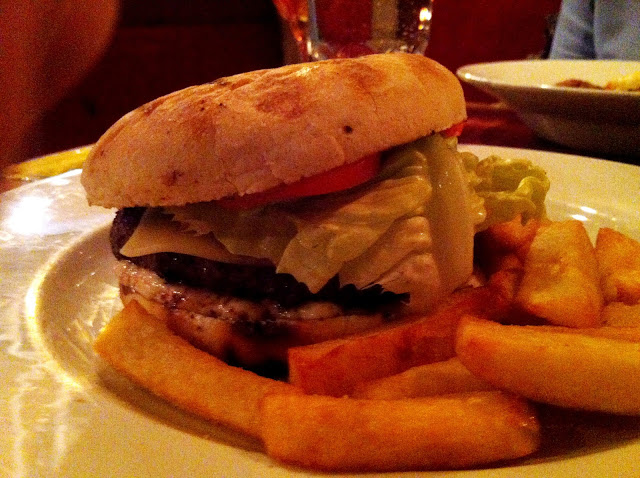 C has a standard dish she always goes for – the Confit of Duck Leg with Leek Gratin and Ginger Sauce, which she heartily recommends. However, it’s quite a large dish and given that she was only slightly peckish (see what we did there), she went for a lighter bite instead: Lamb Meatballs in Tomato Sauce with Cauliflower Mornay. A good choice, she’d recommend it but would emphasise that it really was on the light side: five meatballs with rather a lot of tomato sauce might not be too filling if you’re anything more than just a little hungry. Her starter, though, was outstanding: a generous and perfectly cooked portion of Baked Goats Cheese with Mixed Leaves and Sun-Dried Tomatoes. 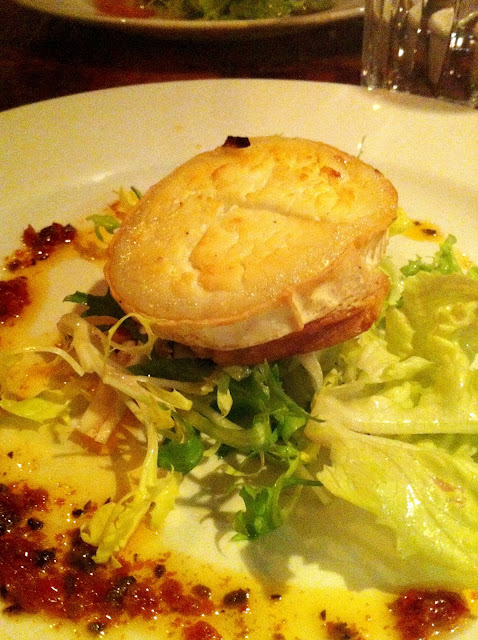 A mention really has to go to Pizza Pilgrims – technically not a restaurant (although news is that they’re opening one in Soho very soon, which we can’t wait for) but some of the best pizza in London. 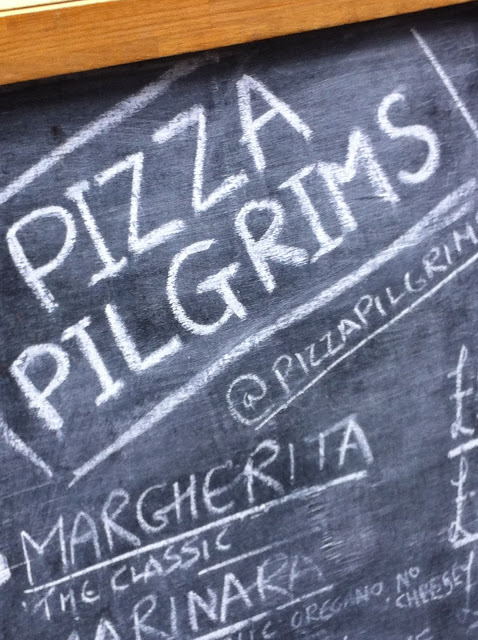 We’ll do a proper post on them soon, we promise, and will try to make it along to one of their pop-ups soon too (we’ve been meaning to for, oh, about a year), but in the meantime here’s a few tempting photos, and a recommendation to get down to Berwick Street market and grab a pizza as soon as you can. 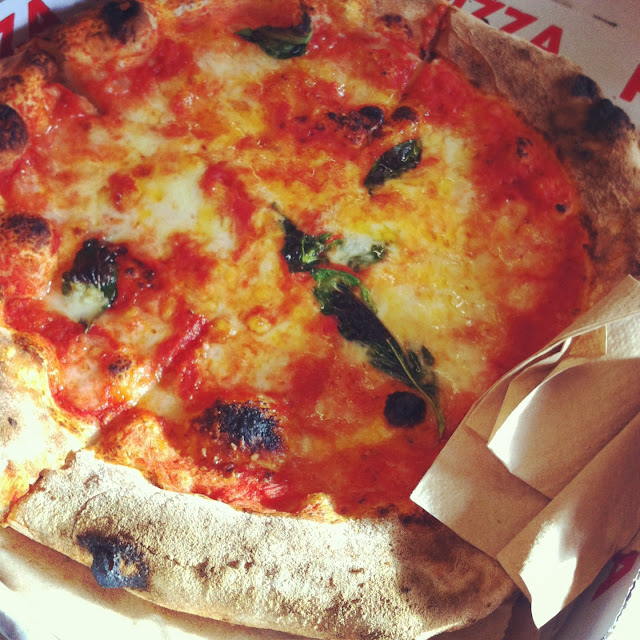 And finally, a last and extra special mention to the macaroons at Kahve Dunyasi. We know we've posted on them before, but the biscuits deservce a special mention. Colourful, delicious, the perfect consistency and the best A and C have found in London – we think they probably even beat Ladurée, they’re that good. We shared a box with A’s family recently, and general consensus was excellent all round. 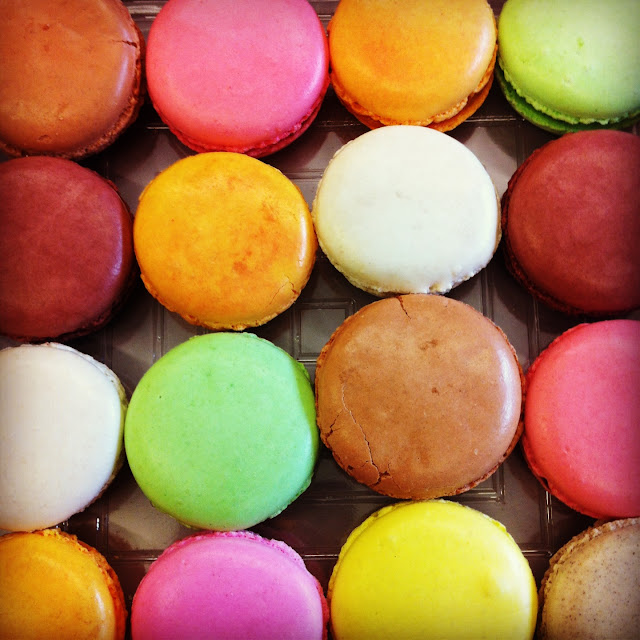 Other eateries we'd recommend but which we didn't take any photos at include: