C loves Camden; it reminds her of Brighton, the town by the English south coast where she lived for four years before meeting moving back to London and meeting A. For the uninitiated, Brighton is a quirky, kooky, liberal place where individualism is heavily celebrated; in terms of food, the percentage of the population who are vegetarians or vegans is apparently much higher there than in other areas of the UK, and there are a wealth of great eateries catering for these demographics. Though a meat eater, C opts for a mainly vegetarian diet just out of preference - and out of a habit which can mainly be attributed, she's sure, to the four years she spent living by the sea. Restaurants like Terre a Terre and Food for Friends are topics for other posts, but suffice it to say that if you don't believe vegetarian and vegan food can be equally as good as meat-based dishes, you definitely haven't been to Brighton enough.

Or Camden, apparently. C's from south of the river and it's fair to say that, apart from a few trips to the place as an angsty teenager, she hasn't spent much time there. When veggie L (who C met in Brighton, and who has appeared on the blog in places such as Amico Bio and The Water Poet) suggested meeting there, though, as she'd heard there were some good vegetarian and vegan eateries, C was more than happy to comply. The pair found vegan café InSpiral and delved in, with C cooing within the first few minutes that it "felt like Brighton" - praise indeed. 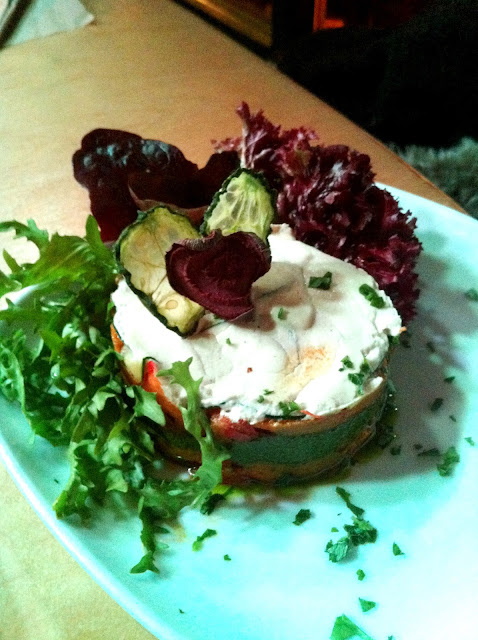 InSpiral is a very relaxed, individual kind of place. If you're comfortable in that kind of scene, then you'll love it; for others, it might take a bit of getting used to. However, C loved it and would heartily recommend giving the place a visit; if you've never had vegan food before, it'll almost certainly surprise you.

C and L started their meal with two cups of hot spiced apple and cinnamon; this was unbelievably good, so much so that C went back for a few more cups afterwards. Even if you're not eating, pop into InSpiral for this drink: it's worth it. 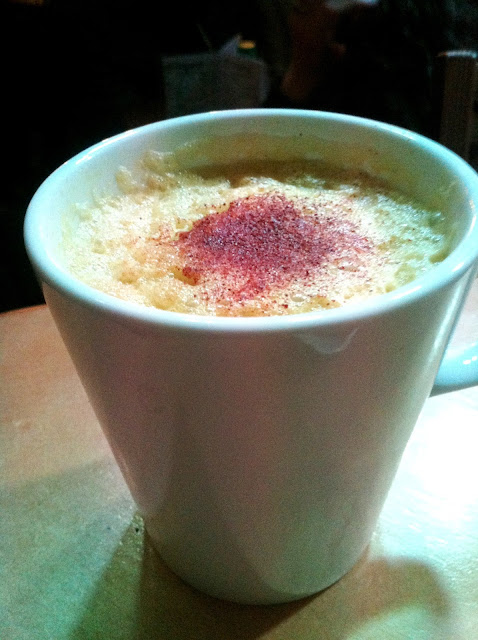 To eat, C went for a vegan lasagne - obviously made from vegetables, with layers of special vegan pasta too (no eggs or cheese present in the dish, though, of course). It had a good depth of flavour and was generally very pleasant, although not outstanding: the problem really being that it was rather on the thin and sloppy slide when it came to consistency, and there weren't so much layers as just a mass of vegetables scattered over each other. 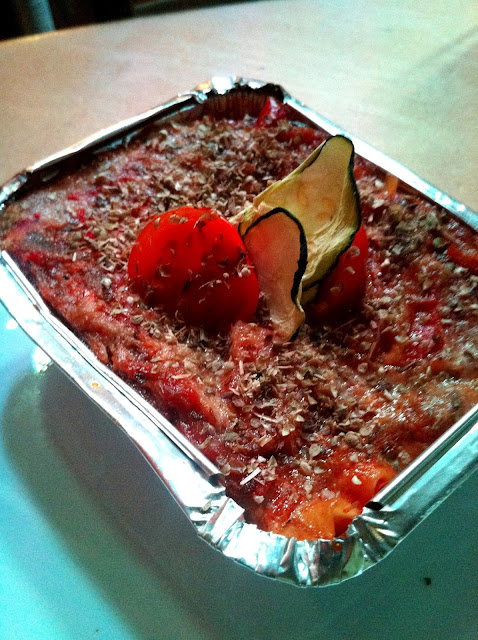 L tried a kind of organic uncooked tart, which was certainly visually appealing with layers of various vegetables throughout, and an elegant leafy garnish on top. L's verdict was overwhelmingly positive, and much more so than C's opinion on her choice of dish: the layers apparently complemented each other well and L reported back only good things about the textures and flavours. 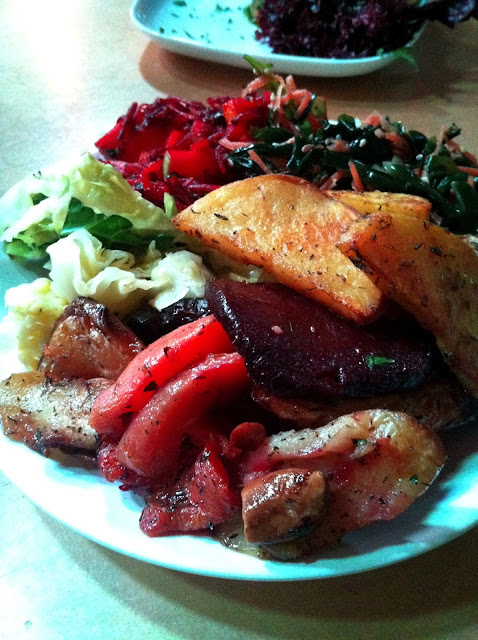 We also opted for a plate of side salad: essentially, the concept here is that you can order a plate of sides and then choose which three or four you want from a big selection of containers of fresh, delicious-looking ingredients at the front of the café. Portion sizes are generous, too: we went for beetroot salad, potato and butternut squash wedges, a spinach salad and a kind of roasted veg selection, including carrots and cabbage (C's all-time favourite). This kept us going for a while, and for C was certainly the highlight of her meal here. 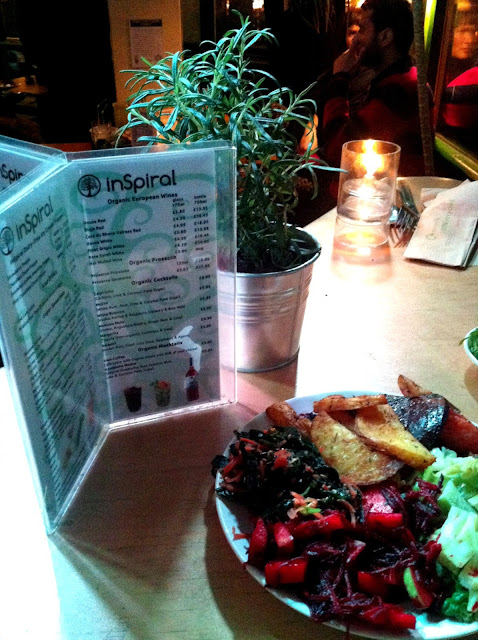 We were still a little peckish (read: greedy) after dinner, and as a treat to ourselves for staying off the alcohol that night we decided to indulge with a piece of cake instead. C was rather intrigued by the concept of raw cake: the phrase conjures up images of raw eggs and such, which of course isn't the reality in a vegan recipe, but left her feeling slightly perplexed all the same. The reality, though, was incredibly good: she predictably opted for the carrot cake, which was very dense, moist and quite chewy - more so than a cooked cake - but really quite delicious. L went for a raw cheesecake (obviously minus cheese) and reported back similarly. The trick, C would suppose, is not to compare this to cooked cake: think of it as a different concept entirely, and don't expect the same consistency or flavour, and you'll enjoy something similarly delicious but quite distinct. 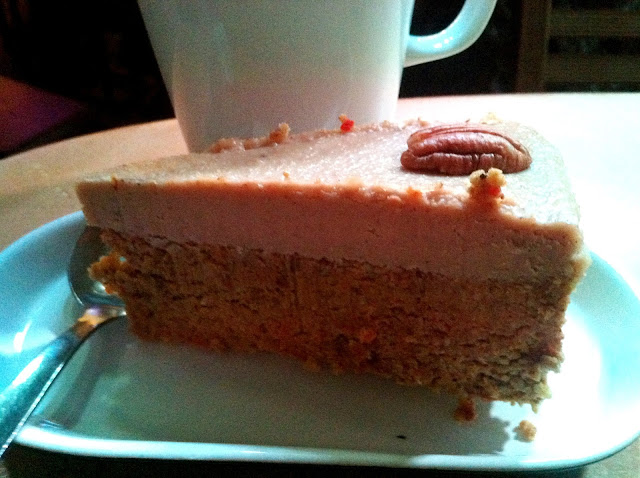 One of the things that C really loved about InSpiral was the atmosphere, though: it feels completely chilled, but very liberal (dare we say quite hippy-ish); a combination which is sometimes hard to find in London. If you can, sit by the windows here: at night, there are beautiful views of the river, of Camden Lock and of the twinkling lights of the boats. Lovely. 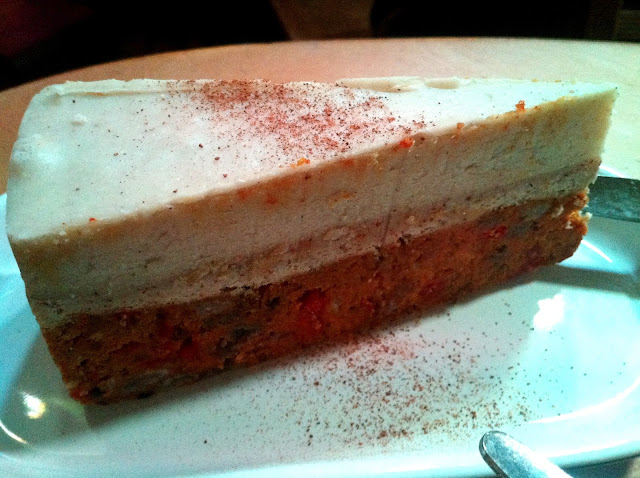