While we might have mentioned our mutual love of Italian food before, we've almost certainly failed to convey just how much C, in particular, loves pizza. She could happily eat the stuff for breakfast, lunch and tea most days and it's one of the few foodstuffs she genuinely never tires of. On a trip to Rome a few years back, her travel companions joked with her that she'd eat pizza for  at least two meals every day of their almost week-long trip - and, with the exception of one particularly good plate of gnocchi, she proved them right (much to their amusement).

When pizza joint Fire and Stone invited Slightly Peckish to be part of their Tasting Panel then, you can imagine that C was more than happy to take them up on their offer. Fire and Stone were revamping their menu with a view to bringing back a few of their iconic pizzas by popular demand, which are currently off the menu. There were a good few contenders for which pizzas should be reinstated, though, and so Fire and Stone invited C, along with some other food bloggers, to taste all the pizzas in the running and choose a top two to appear on the menu nationwide. (Blogging - it's a hard job, sometimes!). 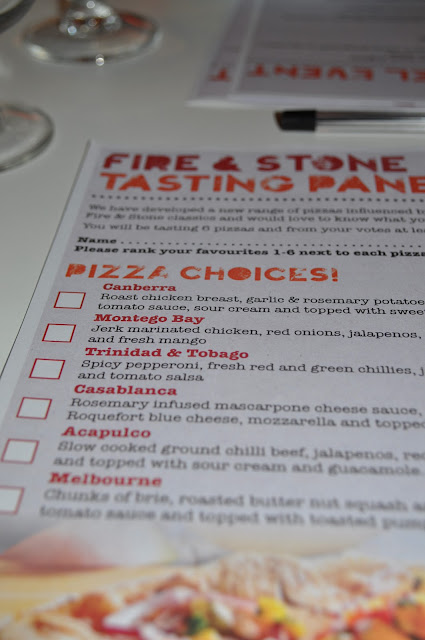 For those uninitiated with Fire and Stone, this is a pizza joint with a difference. A smaller chain, for a start, there are five branches nationwide (three in London, one in Oxford and another in Portsmouth) - but the real difference that separates Fire and Stone from other chains is its pizza toppings. Instead of plain old margherita or a distinctly average pepperoni, here toppings are rather more on the adventurous side: think shredded crispy duck with hoi sin sauce, mozzarella, spring onions and cucumber strips, for example (that's the Peking, in case you're wondering), or chicken tagine, preserved lemons, fresh coriander and coriander yoghurt (the Alexandria). The pizzas are named after places, too, which is another nice touch that appeals to C's travel bug.

Sat in the Covent Garden branch of the restaurant, C and the other bloggers were presented with six different pizzas, which we were asked to taste before ranking 1-6 in order of preference. In all honesty, they were all seriously good - C was very impressed by the flavours, texture and obvious quality of the ingredients in every pizza on offer. 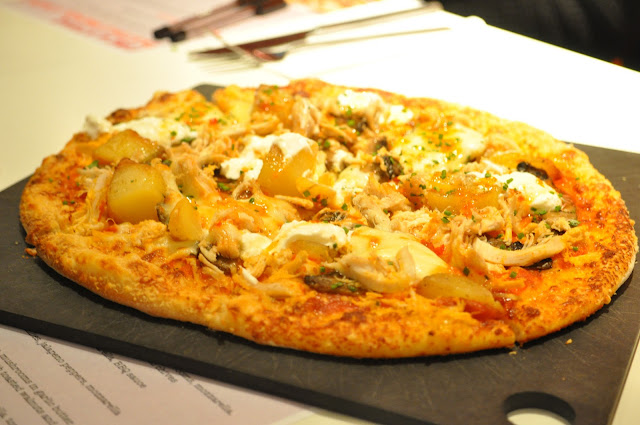 First up was the Canberra: roast chicken breast, garlic and rosemary potatoes, marinated mushrooms, mozzarella, tomato sauce, sour cream and topped with sweet chilli sauce and chives. Put simply, C loved this: it had a brilliant depth of flavour and texture, and she particularly liked the perfectly roasted potatoes (a weird choice on a pizza, admittedly, but it really worked) and the contrast between the sour cream and the chilli sauce. And a score? 9/10. 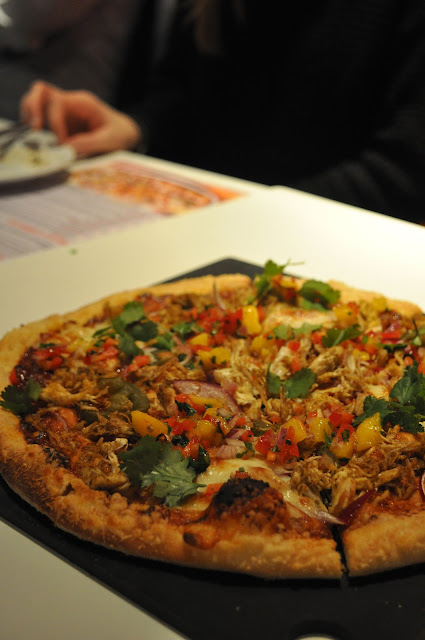 Next - the Montego Bay: jerk marinated chicken, red onions, jalapenos, mozzarella, BBQ sauce and fresh mango. To be totally honest, C wasn't sure she was going to like this - she's not usually the biggest fan of BBQ sauce (she leaves that to A, who loves the stuff) and she wasn't convinced about sweet mango mixed with jalapenos on a pizza. She was totally wrong - it was great, and particularly the sweet mango mixed with the spice of the BBQ sauce, jerk chicken and the jalapenos. She'd give this 8/10. 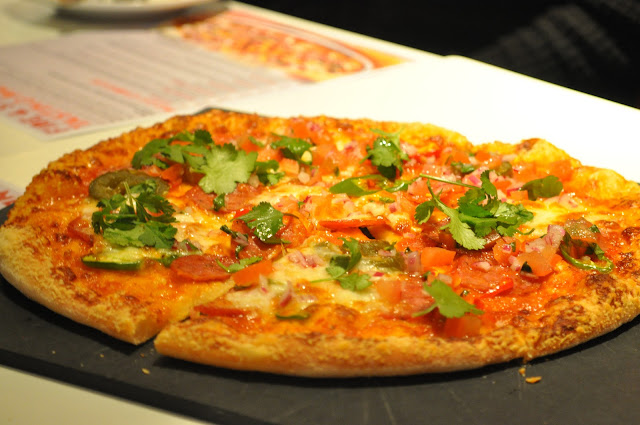 Next came the Trinidad and Tobago: spicy pepperoni, fresh red and green chillis, jalapeno peppers, mozzarella and tomato salsa. While this pizza would've been right up A's street (he's a fiend for anything spicy), it was sadly a bit too much for C, who can't really cope with blow-your-brains-out hot. The underlying flavours and textures were great, but again not really for C. The general consensus among the other bloggers too was that this was the most 'standard' pizza on the six-choice menu, and for this reason C couldn't really rate it too highly - only in that, in her opinion, you don't go to Fire and Stone looking for something 'standard', but for something that little bit different. There's no denying that it was a good choice for anyone who likes spice, though, and freshly made with great ingredients as always. 6/10. 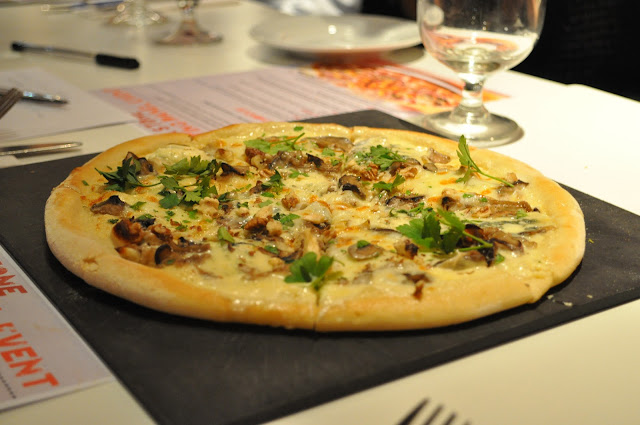 Then came the Casablanca: rosemary infused mascarpone cheese sauce, mushrooms in garlic butter, Roquefort blue cheese, mozzarella and topped with toasted walnuts and parsley. It might have been previously mentioned on Slightly Peckish that cheese is one of C's all-time favourite things, and she's got a real soft spot for any kind of blue cheese. The Roquefort worked really well on this pizza, along with the mascarpone, and despite the fact that mushrooms in garlic butter aren't really C's favourite pizza topping she was really very impressed. 7.5/10. 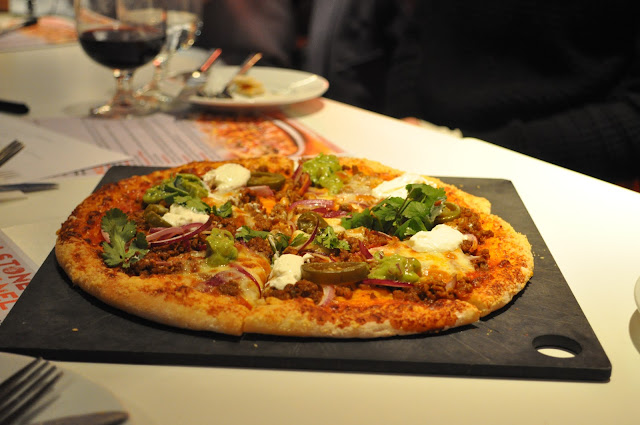 The penultimate choice was the Acapulco: slow cooked ground chilli beef, jalapenos, red onions, mozzarella, tomato sauce and topped with sour cream and guacamole. Another choice that A would've loved, C wasn't expecting to like this one too much (and her palate was still recovering a little from the Trinidad and Tobago!) - but she was very pleasantly surprised. Although not a pizza that perhaps she'd choose herself, this is all down to personal taste, as it was packed full of flavour and the contrast of the chilli beef and jalapenos with the sour cream and guacamole was great. A solid 7/10. 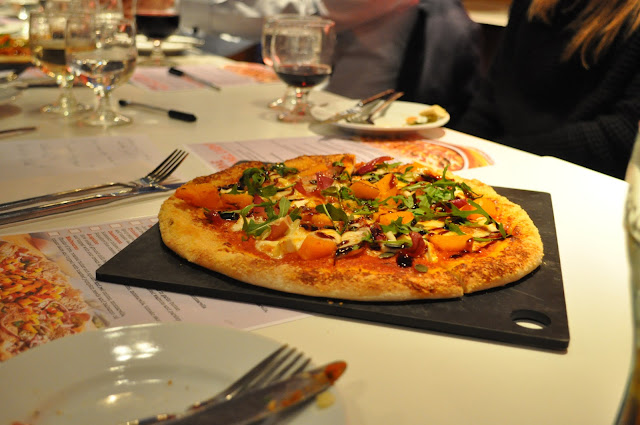 Last was a trip back to Australia with the Melbourne: chunks of brie, roasted butternut squash and red onions, mozzarella, tomato sauce and topped with pumpkin seeds and balsamic oil. Next to camembert, brie is C's all-time favourite cheese, so this making an appearance on a pizza immediately put it up there as one of the best contenders of the evening. Butternut squash on a pizza is certainly an unusual choice, but it worked well, and especially with the brie - this was lovely. 8/10.

With the tasting over, we pondered over our votes while tucking into excellent desserts - C had the excellent cinnamon dough sticks with nutella and toffee (as if she hadn't had enough dough already!) while fellow blogger We The Food Snobs opted for the delicious-looking cookie sandwich. 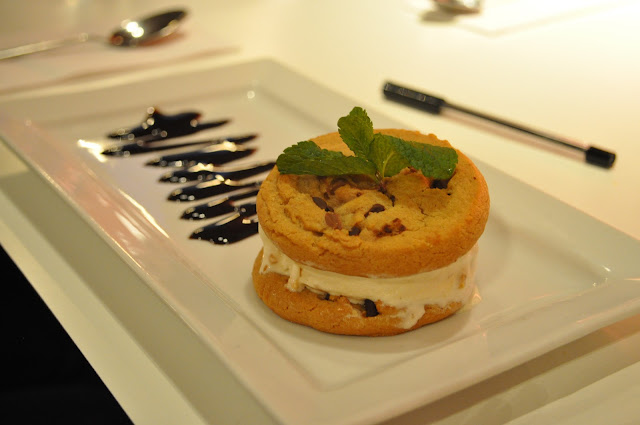 After much deliberation, C voted - and it's probably no surprise what came top of her list: the Canberra, followed by the Montego Bay (after much deliberation between this and the Melbourne). Results will be out shortly as to which pizzas were voted the most popular by all of us bloggers in attendance, and which will therefore be reinstated on the menu - but it's safe to say that whatever gets picked will be full of flavour, full of texture, made with fresh ingredients and a great choice for an unusual but delicious pizza. 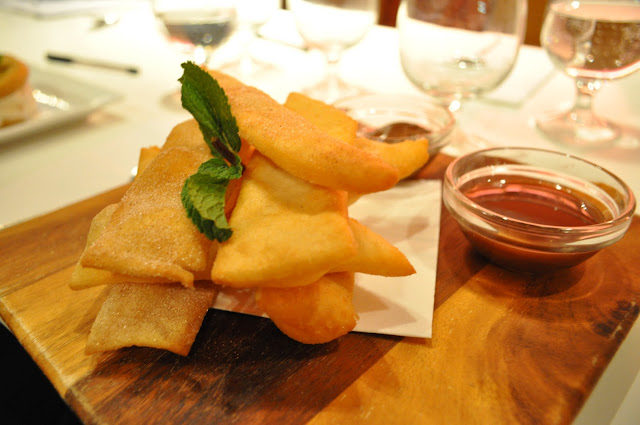