Back to Georgia (Sort Of): Tbilisi, N7

While travelling around Eastern Turkey last year, we ended up taking a quick detour into Georgia. A visit to the ex-Soviet state can be quite a difficult experience at times (especially if you're travelling there spontaneously without knowledge of Russian or Georgian or even so much as a guidebook or a map), but the food is outstanding, and more than worthy of a few words.

While Georgia may not be known for its food in the West, it has a rich and ancient culinary tradition. It was here, we learned, that grapes were first cultivated and that wine was first produced; a fact not lost on the Georgians, who have turned the toast into an art form. The food, too, is richly varied, though there are underlying themes such as salty white cheese and coriander. It often seems that either one or the other or both is present in every dish (note: don't go to Georgia unless you love coriander. A lot).

Even with just three days in the country, we ate lots of different things, and had good intentions of posting about them until we got back home to realise that none of our photos had come out. So, six months later, we thought we'd try out a Georgian restaurant here in London, and headed to Tbilisi in N7 (as opposed to Tbilisi in Georgia itself - it'll be a little while until we had back to the country after last time!).

Situated between Holloway Road and Highbury & Islington Tube stations, Tbilisi is a quiet but charming little restaurant serving up really great, authentic Georgian food, and we'd certainly recommend a visit. We started our meal there with a glass of Georgian wine apiece - C went for a glass of the white Ereti or Hereti, a brilliantly well-balanced dry white wine, while A went for a glass of the house red, a smoky earthy and well balanced Georgian wine.

When we were in Georgia itself, our experiences with drinking wine there were quite varied; the most interesting of these being during dinner on the first night in the beach town of Batumi, where we got taken to dinner by two Argentines, a Belorussian and an extremely flamboyant Filipino (how we ended up at dinner with these guys is a story for another time). We ended up in a tiny basement restaurant, and were presented with clay bowls, which A and C of course assumed were for eating out of. Instead, when the wine was presented in a tall, thin, clay flask, A - as he'd unwittingly situated himself at the head of the table - was called upon to be responsible for the wine (always a dangerous suggestion). In Georgia, we were told this meant that he had to share the wine out between every guest's bowl using a certain hand (we forget which), make a speech, and that we all then had to drink in unison. It made for a bizarre but charming experience, and we do admit to being a little bit disappointed when our wine was served up in actual glasses at Tbilisi restaurant here in London. 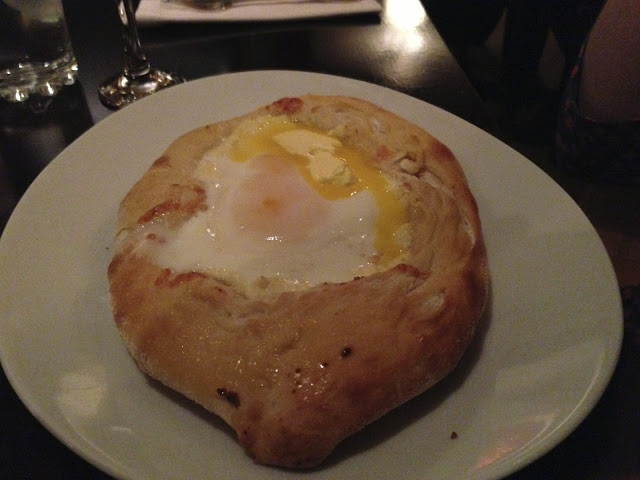 Onto the food, we browsed the starters and knew exactly what we'd order. The one foodstuff we got to know really well in Georgia was Khachapuri, which is about as ubiquitous in Georgia as Simit is in Turkey: each region has its own variant and almost every cafe serves up this delicious cheesy bread. The Ajarian version, called Acharuli, is eye-shaped, and comes with an egg yolk cracked into the middle, which looks like a big orange pupil. Notwithstanding the slightly odd appearance, Acharuli is absolutely scrumptious; even A, who usually holds back on the cheese due to light lactose intolerance, always attacks the thing with gusto. The saltiness of the cheese is particularly pleasant with the richness of the egg yolk, which is generally cooked to melty perfection with both cheese and egg running all over the place. Heaven. We were pleased to say that the Tbilisi restaurant version was almost every bit as good as the stuff we had in Georgia, although it did use a slightly differnet, less salty cheese, which altered the flavour slightly. 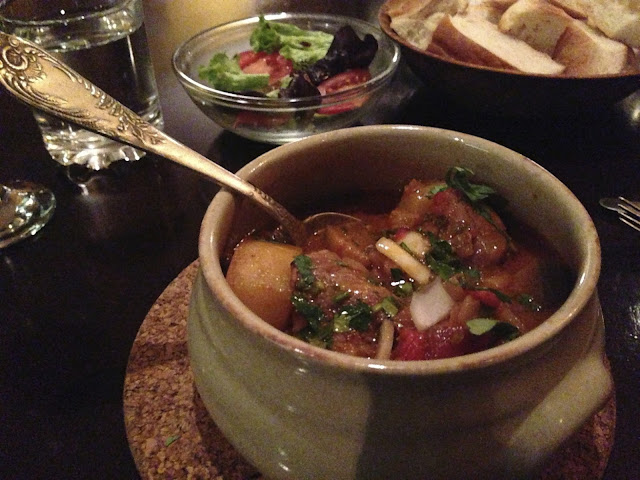 Onto the mains, and we deliberated for quite some time over what to choose. Going back to our meal in Batumi with the motley crew we found there, the food we had was really quite impressive: plates and plates piled high with all sorts of things, roughly announced to us as "meat" or "vegetable", so we had to do a bit of guesswork to ascertain what we were actually eating. One of the best dishes was Ostri - a traditional tomato, beef and potato soup, spiced up with handfuls of coriander and lots of garlic. The dish packed quite some punch, but we all made extremely light work of the enormous bowl our host brought to the table.

The other culinary highlight of our trip to Georgia was Chkhmeruli chicken, a simple but remarkably tasty dish.  This is essentially roast chicken, done in a thin yoghurt sauce, and then flavoured with lashings of garlic and the wonderfully named Khmeli Suneli spice mix. The latter contains a whole variety of exotic flavours imbuing the dish with a flavour all of its own and which is quite difficult to describe. A and C ordered this on their last night without knowing what to expect and were pleasantly surprised when the dish turned up. As with the Ostri, the dish was extremely pungent but delicious, leaving both foodies satisfied with their choice. 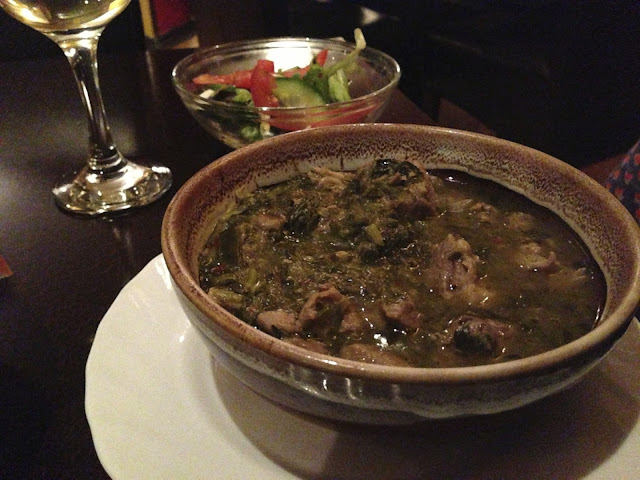 So, back to Tbilisi restaurant, and we found that there was neither Ostri not Chkmeruli chicken on the menu, admittedly to our dismay. Still, what we did have was tasty - C went for the Chakapuli, lamb in an aromatic tarragon and white wine sauce and served with lashings of coriander (of course), while A tried the Chanakhi - a spicy lamb and aubergine bake with potato, onions and tomatoes. Both mains came served in bowls with an accompanying small side salad and a big basket of bread (this didn't taste like authentic Georgian bread, sadly, but was very nice all the same).

We were too full for dessert - and anyway, nothing could really parallel the pastries we had in Georgia itself when we wanted something sweet. The apple turnover-like pastries we found for the equivalent of 10p each in a local bakery were absolutely outstanding, C still fantasises about them, in all honesty.

So Georgian food, it turns out, is extremely popular all over the former Soviet bloc - and for good reason: it's brilliant. In fact, Tblisi was full of Russians on romantic dinners the night we visited. If you're not planning a trip to the country any time soon, check out Tbilisi restaurant in N7 instead for a reliable introduction to what the cuisine can offer.
Labels: Dinner European Further Afield Georgia Georgian London Restaurants Under £30pp