In our opinion, there's not much nicer than whiling away a lazy Sunday at a pub lunch with friends; and we consider ourselves extremely lucky that we're surrounded by literally hundreds of great roast dinner options here in London. That said, some are definitely more worth writing home about than others, and with so much choice it becomes hard to separate the wheat from the chaff, so to speak. Indeed, in our experience pubs named in "London's Top 10 Sunday Roasts" lists and the like rarely live up to the hype, as C found out a while ago with Shoreditch joint The Water Poet.

We're happy to say, though, that there's recently-opened, centrally-located Sunday lunch spot where an outstanding reputation is entirely justified: The Pig and Butcher in Islington. 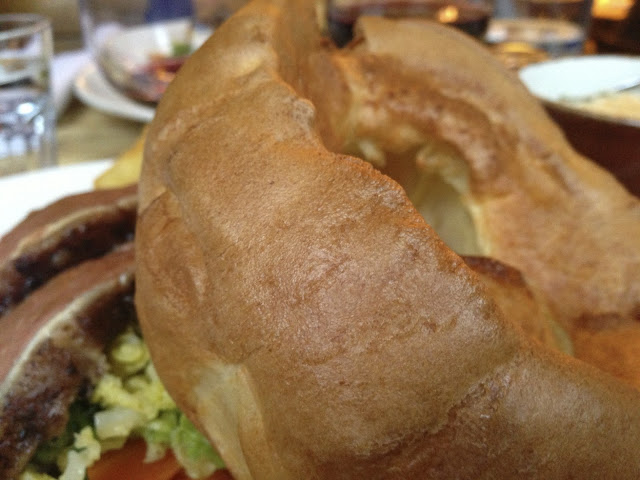 We booked a table at The Pig and Butcher (and note - you'll need to book several weeks in advance if you're after a weekend meal) for a relaxed Sunday lunch with M, one of A's oldest friends, and his girlfriend J. From the outset, we were impressed with the place: it was cosy but bustling, staff attentive but not overbearing, and we were seated on raised wooden benches which looked out to Upper Street on one side and over the rest of the pub on the other. It was everything we expected from the latest venture from the people behind The Lady Ottoline and The Princess of Shoreditch, Scott Hunter and Maria Larsen, and we were eagerly eyeing the plates of diners around us. 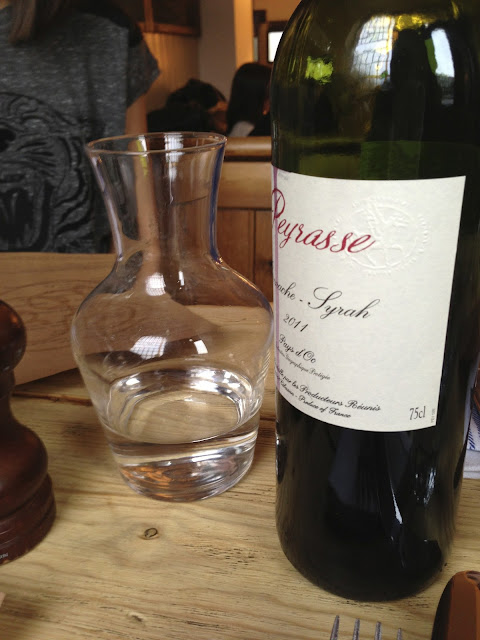 We began our meal the way every good Sunday lunch should begin: with a bottle of good wine. The wine list is full of uncomplicated, interesting, unpretentious choices, and you really can't go wrong even with a bottle of the house plonk. We went for a bottle of red with the French Peyrasse Rouge 2011 which was - as the website claims - fresh and vibrant, and had fruity undertones of plum.

Our red wine was the perfect accompaniment to our mains, which is what we really had to write home about with this place: we were seriously impressed. The Pig and Butcher do live up to their name as they smoke, butcher and cure their meat on-site, and it really shows. Meat is perfectly tender and wonderfully fresh, and we appreciated the fact that all meat and vegetables are sourced locally and organically so you're under no illusions as to where your food's been before it lands on your plate (increasingly crucial given the horsemeat scandals in the media, and associated debates). Reflecting this, the menu changes almost daily, but rest assured that the food in here is so good that you'll be hard pushed to go wrong with any of the choices. 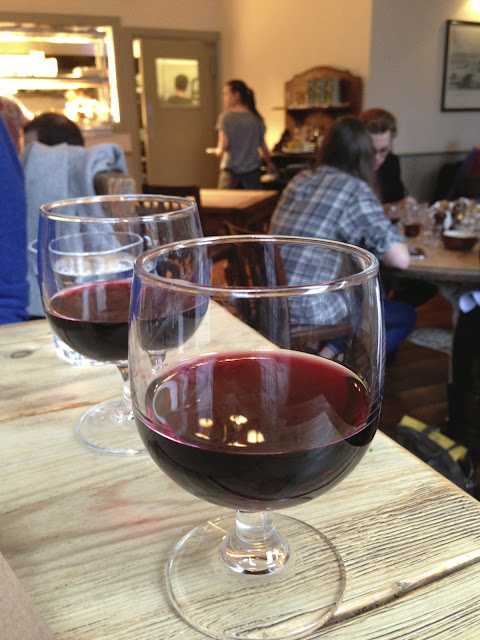 Although tempted by most of the extensive menu, A, C and M all went for a traditional roast with all the trimmings. C and M opted for the lamb, which was beautifully pink, tender and flavoursome, and some of the best C (somewhat a lamb fanatic) had tasted in a while. A predictably went for the roast beef; served rare, it was also wonderfully tender and juicy and murmurs of approval abounded from his corner of the table too. 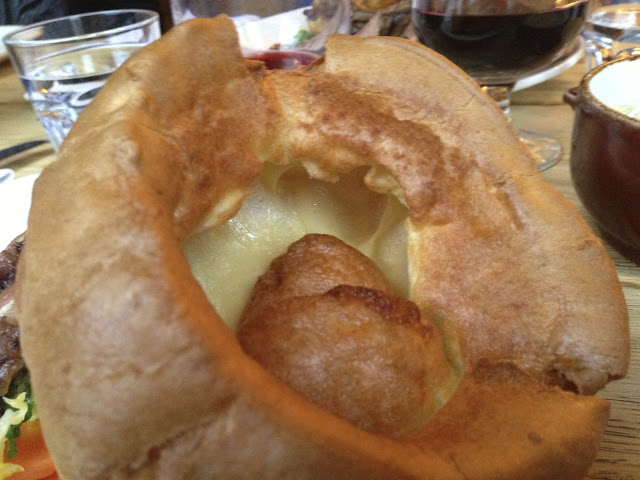 J dared to be different by going for the Cornish lemon sole, which was served with new potatoes and green sauce. She was initially a little apprehensive about how she'd cope with the whole fish, but it flaked off the bone wonderfully in chunks and was full of flavour, leaving J a happy customer too. 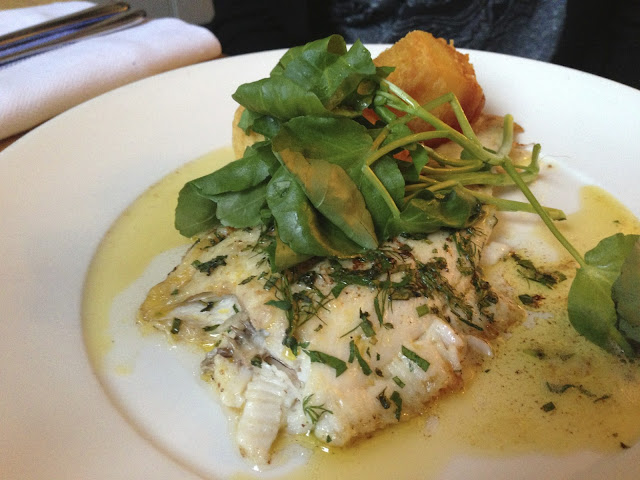 We were sorely tempted by the desserts, but portion sizes here are so generous that we didn't have room, despite not having eaten breakfast before we ventured to the pub. If you are after dessert, though, expert choices such as traditional Apple Crumble alongside other interesting choices like a Chocolate Torta Caprese and Jersey Curd Cake. Instead, we rounded off our meal with tea, coffee and a good deal of chatting before A had to make a swift exit to catch a flight to France for business (as ever, it's a hard life...!). 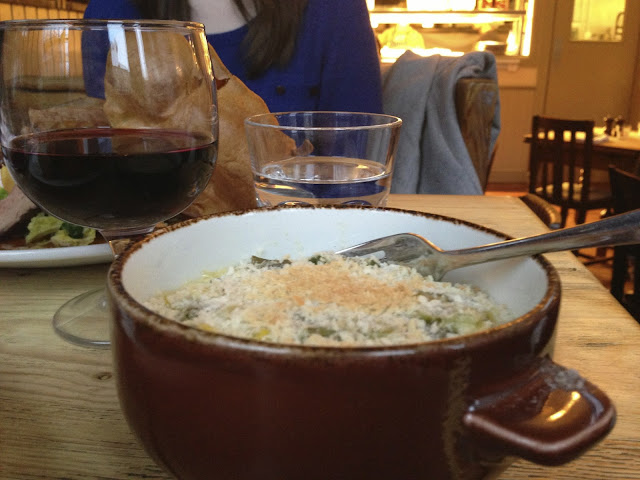 The Pig and Butcher isn't the cheapest place: you'll certainly find more affordable pub lunches in London, but they probably won't be as good as this. A main will set you back, depending on what you choose, somewhere around £15-£25, and you're looking at around £40 a head if you go for a full three courses with a house bottle of wine (although hats off to anyone who could actually eat three courses with the size of the portions here). All in all, although it's a little more than A and C would typically spend on a Sunday lunch, it's excellent value for money - and we'll definitely be going back soon for more. 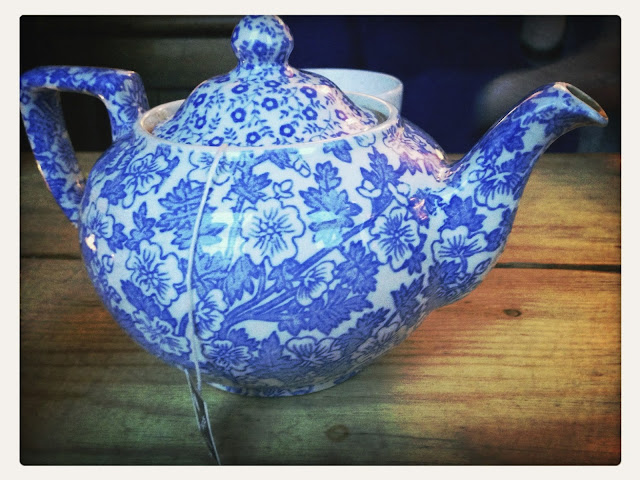