Our trip to Eastern Anatolia last summer left both of us firm fans of Turkish cuisine - especially C, who'd never been to the country before and hadn't experienced much beyond a greasy kebab in at the end of a night out. After a few weeks backpacking around the country, we soon both had our favourite dishes - some of which we've written about before in our posts on Turkish breakfasts, tea, Turkish delight (lokum) and baklava.

Since our return from Turkey, we'd tried to source some of the cuisine back in London. We wolfed through boxes of Karaköy Güllüoğlu lokum A had hauled back as his hand luggage and we'd gone through a fair amount of Turkish tea in the samovar we'd brought back from Istanbul. Perhaps our biggest triumph so far was C's discovery of a Turkish supermarket in the darkest depths of West Croydon: there were almost squeals of delight when she discovered fresh Ayran - a salty yoghurt drink A is particularly fond of - and her beloved sweet "şeftali" peach juice in a can (the Turkish do it better than anyone else!).

Despite all this, though, we hadn't eaten proper Turkish food since our return almost six months ago. When A suggested a trip up to Stoke Newington to explore one of the many Turkish restaurants there during our recent "staycation", C jumped at the idea - and so they stumbled upon the rather clumsily named 19 Numara Bos Cirrik 2. 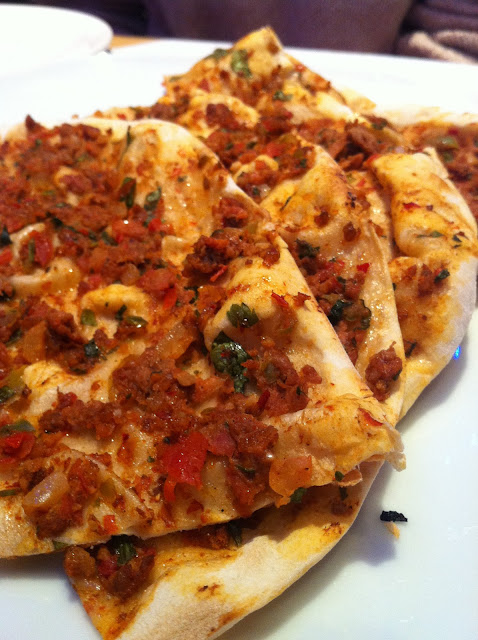 19 Numara Bos Cirrik 2 might have a difficult name, but dining here is incredibly easy. The place is pleasingly busy on a week night - and one would imagine bustling at the weekend - and the food is authentic and reasonably priced. It's certainly a good bet.

We went a bit all out with the food: our eyes were definitely bigger than our stomachs (a common occurence for C) and we were soon struggling with the generous portions.


We started with a Pide to share - a Turkish pizza-like bread which is usually covered with tomatoes, meat (usually lamb), peppers, onions and a variety of spices. It generally has a bit of a kick, and is incredibly moreish. In Turkey, it was our standard lunch: they have whole restaurants - we suppose a bit like pizzerias - which would serve up the stuff. 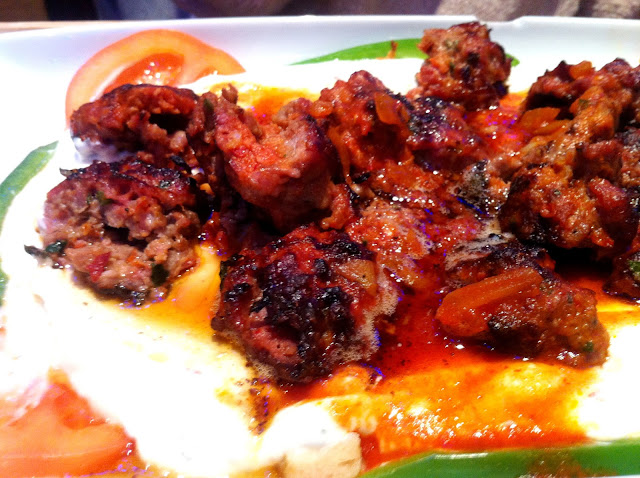 A and C both have our favourite kebaps (or kebabs) from our time in Turkey: a good few weeks gave us plenty of time to try every type of kepab we came across, but we both had firm winners.

For C, the kebap which wins above all others is the Iskender. It takes its name from Iskender Efendi (Iskender being the Turkish for Alexander), and apparently dates back to the 19th century. Originally said to have originated in Bursa in the northwest of the country, C loves it because - unlike many other kebaps - it's not at all dry.

The Iskender is typically served in a cylindrical dish, which is lined with pieces of Turkish bread - basically pitta. Over the top goes thin pieces of chopped, herby, lightly spiced lamb with a hot tomato sauce mixed with fresh, lightly salted yoghurt. Finally, around the side of the dish are tomatoes and peppers - sometimes fresh, sometimes grilled. In the most authentic variations of the dish, such as when C had it for the first time in Ankara, the waiter will come up to your table with a saucepan full of boiling butter (sinfully good) and pour it over the top of all of this, so that it bubbles over the lamb. 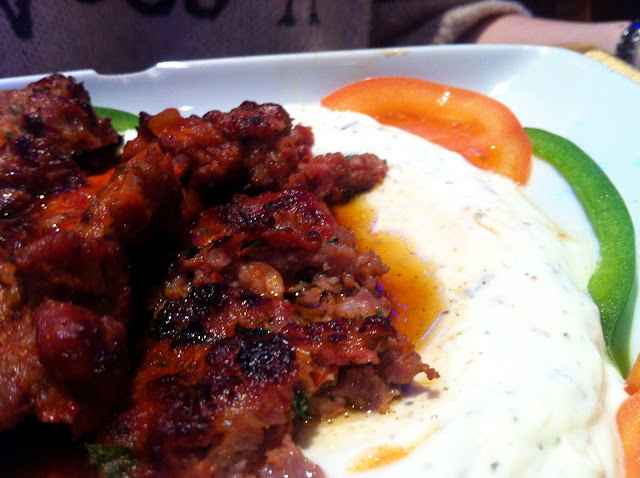 And the version in 19 Numara Bos Cirrik 2? The bread was there, the tomato sauce was great and the yoghurt just salty enough - all in all, a good version. The lamb, however, wasn't quite right - it was tasty, but was essentially doner meat, while in Turkey itself Iskender meat is usually thinner and not quite so chewy. There was also no boiling butter - but this wasn't expected, and it's probably better for C's waistline that it wasn't offered! 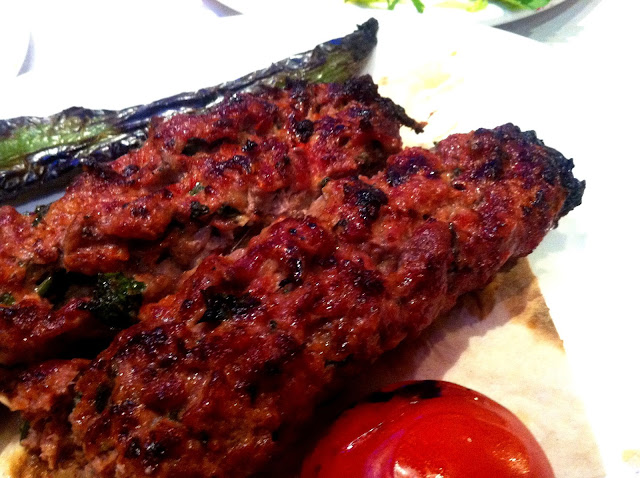 A, on the other hand, loves the Adana - predictably, the spiciest of kebaps typically on offer. Originating from the southeastern city of Adana (there's a surprise), it's a lamb kebap cooked with red bell peppers, chargrilled tomatoes, onion, plenty of sumac and Turkish lavaş bread. The dish apparently dates back to the 16th century, and is originally Syrian.

A approved of his Adana here - it was almost as authentic as the Adanas he had back in Turkey, and there were absolutely no complaints at all as it disappeared in a flash. 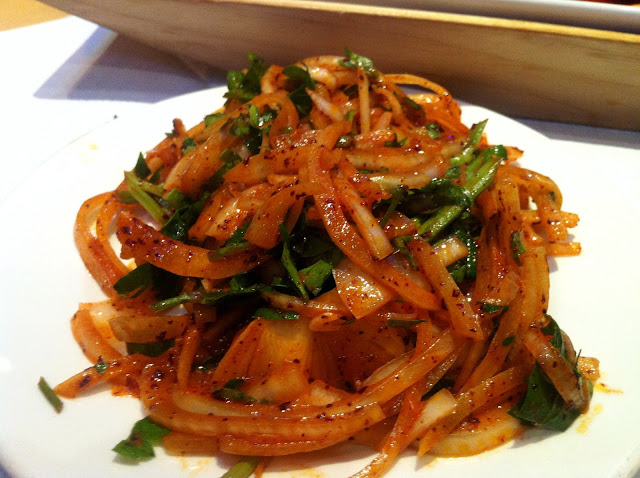 The kebaps also came with a few sides - a green side salad and some kind of onion-heavy side. However, having also ordered hummus and bread as a pre-starter to the pide and kebaps, we were seriously struggling by this point, and so most of the healthy stuff had to be left. 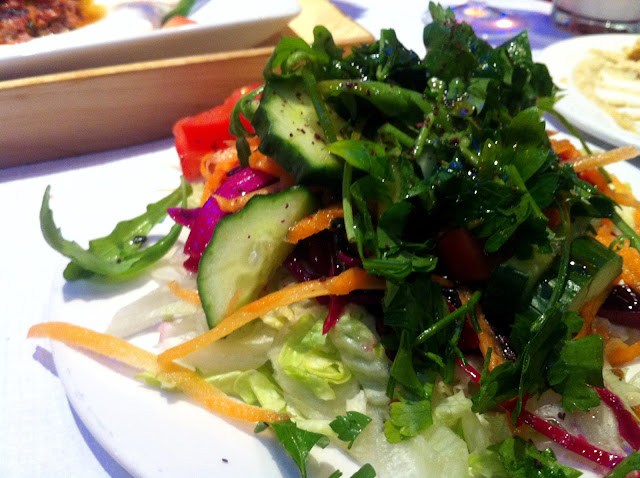 After dinner, we had an amusing exchange with the waiting staff when we decided we wanted some after-dinner refreshments: A asked for a Turkish coffee, but when C asked for tea they assumed she wanted English tea. It was only after explanations of "no, no, Turkish tea - do you have Çay?" that she got her hot black tea in a little tulip cup - just like in Anatolia. It was delicious - she was a very happy customer.

If you're in Stoke Newington, we suggest checking out some of the fantastic and authentic Turkish restaurants up there. 19 Numara Bos Cirrik 2 is an excellent bet - and very reasonable: all of this food came to just over £20 a head.
Labels: Dinner London Middle Eastern Restaurants Turkish Under £30pp