Salads: let's face it, for the majority of non-foodies out there, they're hardly exciting. While A and C both love salads, we know that a lot of our friends think of eating them as a healthy chore rather than a pleasure - and we can understand that, if the salad in question is a bowl of dry lettuce leaves with a few tomatoes and no dressing (as is all too often served up in the UK).

However, make a salad interesting - and by that we mean mixing up the ingredients, adding a few unusual twists and pairing it with a tasty dressing - and what could be a chore becomes a really satisfying and refreshing bowl of food.

In-keeping with A and C's health kick this January, we've been eating a lot of salads. As usual with us, there's one type of cuisine we keep coming back to again and again for food inspiration: Middle Eastern. Along with a delicious Persian salad (more on that another time), our other firm favourite is Tabbouleh - a Levantine Arab salad bursting with colour and flavour. 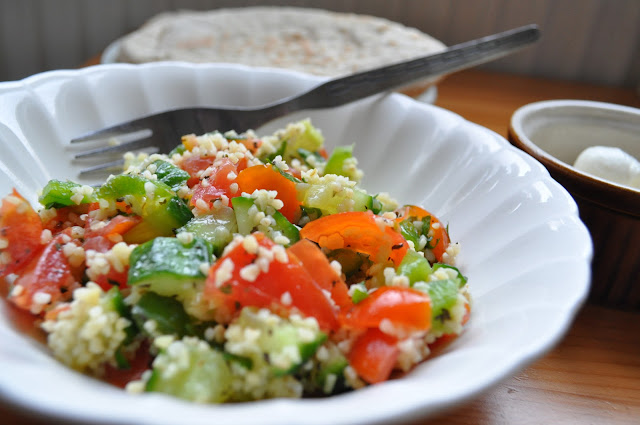 Tabbouleh is traditionally served up with mezze all across the Arab world, and there are plenty of variations of it around - in countries such as Syria, Iraq, Jordan, Lebanon, Israel, Turkey, Armenia and Cyprus.

There are hundreds of Tabbouleh recipes, all just slightly different; honestly, it's a case of trial and error to find the one that you like best, but the brilliant thing about this salad is that you won't really go wrong with whichever variation you choose. 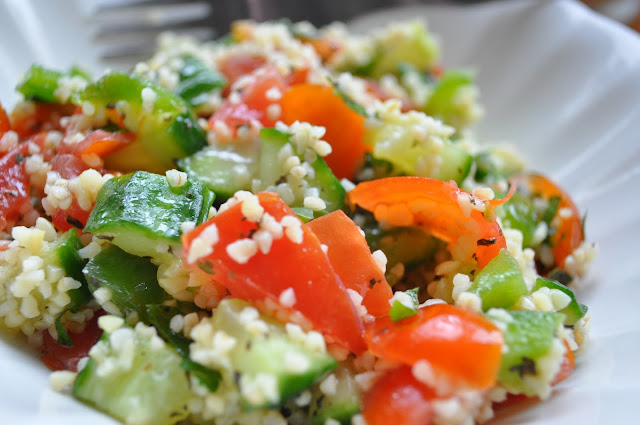 Most Tabboulehs are void of lettuce (a good thing if, like C, a little bit of the stuff tends to go quite a long way) but are packed full of cucumbers, tomatoes, peppers, garlic and herbs such as parsley and mint. One key ingredient of Tabbouleh is bulgur wheat: taking its name from Turkish, it's a grain-like foodstuff made from the groats of different types of wheat.

Tabbouleh salads are almost always served up with a hint of lemon, too; whether it's the juice, the zest or a lemon dressing, it adds a tangy, sour flavour that's incredibly refreshing. As a girl who can suck lemons for fun, C loves this about Tabbouleh: in fact, it's led her to make up lemon dressings for almost any salad she eats (much to A's annoyance, who almost always opts for vinegar instead). 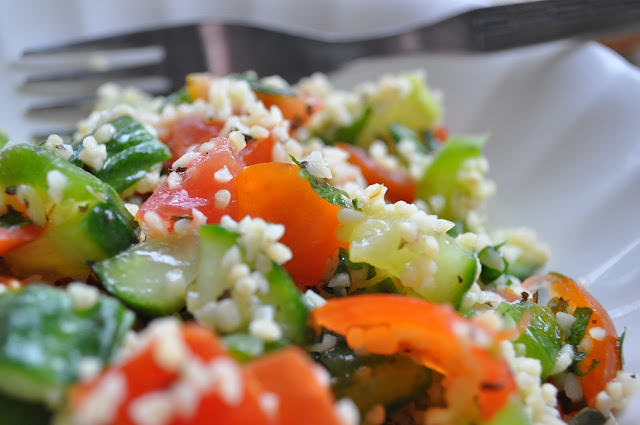 The Tabbouleh recipe that C prefers is from The Lebanese Kitchen, a brilliant cookbook that she'd highly recommend. If you want to have a go at making this crunchy, juicy, refreshingly tangy salad yourself, here's how - it's super easy:

And here's how it's made: 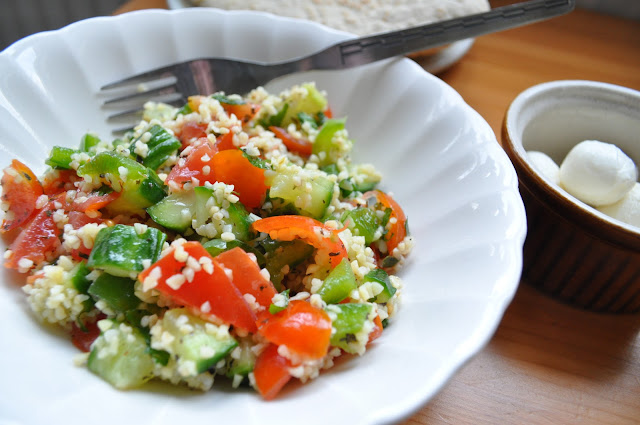 It's delicious served just like that, with Lebanese (or any Middle Eastern) flatbreads on the side. On the occasion photographed for this post, C also added a few balls of mozzarella on the side (cheese being one of her favourite things): however, this is nonetheless an incredibly healthy, and satisfying, lunch. Healthy and delicious: we're onto a winner here.
Labels: Dinner Recipes Eating In Healthy Lebanese Lunch Middle Eastern Persian Recipes Savoury Recipes Turkish