Yorkshire puddings are one of C's all-time favourite foods - it's the stodgy and crispy, yet soft and light, consistency that really appeals to her. For the uninitiated, Yorkshire puddings are made from batter (unsurprisingly, given that they're also known as "batter puddings") and are said to originate from the northern English county of Yorkshire, although apparently there's no real evidence to support this claim. In any case, they prove very popular in Yorkshire - and indeed, in the rest of England - and are almost always served up with traditional British Sunday roast dinners.


When A and C cooked Christmas dinner for C's family this year, the general consensus meant that roast beef replaced the traditional turkey on the menu. With batter puddings traditionally served up as an accompaniment to beef (and along with roast potatoes, vegetables, stuffing and so on), we seized the opportunity to try making our own. Having never attempted them before, C's family did warn against this risky strategy on Christmas Day and suggested relying on the mass produced variety which were sitting in the freezer. Luckily, however, our Yorkshires were a huge success, and were met with murmurs of satisfaction at the dinner table.

While we'd like to suggest that our success was due to our cooking abilities, we're willing to concede that it was probably the recipe that made all the difference: we used the ever-reliable Delia Smith. With relatively little effort, we produced puffy, light, soft Yorkshires that were brown and crisp at the top - and went down a treat.

Yorkshire puddings essentially come in two varieties: mini ones, which you make in a muffin tin, and full size ones, which are the size of a small cake and are cut up at the table. We decided to make miniature ones as with all the other trimmings we'd made they were more than enough. 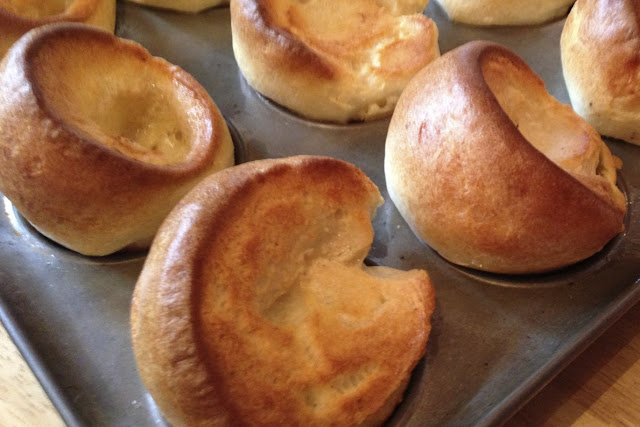 For those that want to have a go at our Yorkshires, here's how, thanks to Delia:

Ingredients (for 6-8 Yorkshire puddings, depending on the size of your tins):

And here's how it's made:

And finally, our serving tip:

One of the trademark features of Yorkshire puddings are their height; according to the Royal Society of Chemistry (!?), a Yorkshire pudding technically "isn't a Yorkshire pudding unless it's four inches tall'. Serve them up as soon as possible, though, as they'll lose their height and their crunchiness very quickly. If you need to leave them standing for a while for some reason, the trick here is to make them up with 2 eggs instead of one: this is what many restaurants do, and while it'll produce stiffer, crunchier versions of the puds, they'll keep their height. 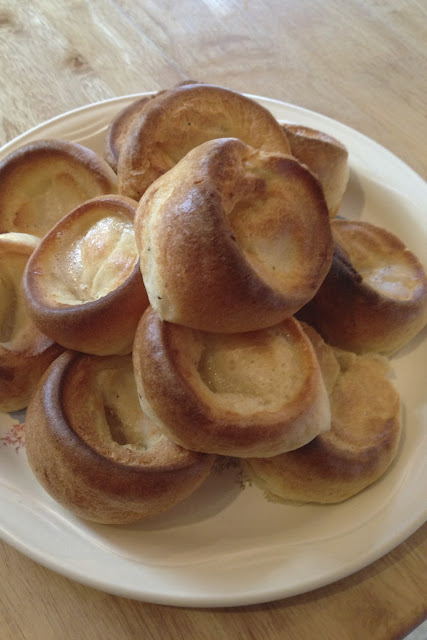