Skip to main content
Labels
Posted by A November 23, 2012

A Children's Party for Grown-Ups

Parties are fun, of that there is no doubt. Parties, it turns out, are even more fun when you let your inner child run rampant, especially (as in A and C's dual cases) when you have a particularly vociferous inner child.

It was A's birthday some while back and, as the Nigerian trips scuppered any chance of a birthday party in October, it was rescheduled for last weekend. A and C have hosted a number of "bring a mug" parties, so called because A's Docklands flat only has four mugs and there's never enough to go around. These parties have a theme, and this one was themed "a children's party". 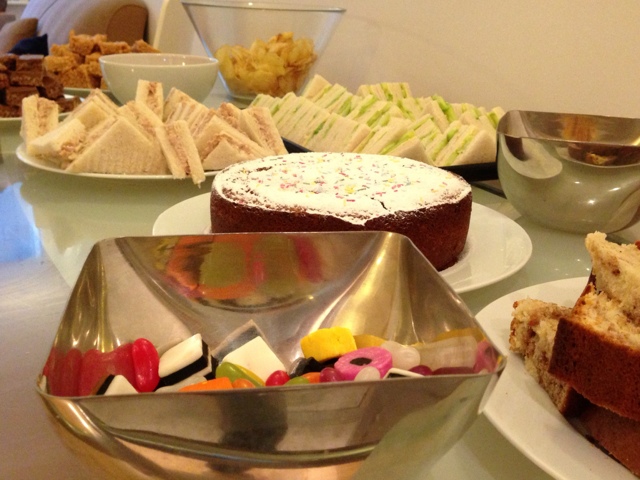 For this, we really pushed the boat out. If you check out the twitpics we post from time to time via our feed @SlightlyPeckish, you'll see what we made. In a nutshell, the menu was consisted of Mamani's Iranian yoghurt cake (this is turning into a fixture of our parties - it's so popular we almost cannot not bake one any more); Rice Krispie squares; Mars slices; a French marble cake; cucumber sandwiches (cucumbers peeled, crusts off - A was very particular about this); tuna mayo sandwiches (crusts off); an assortment of sweets, peanuts and crisps and, to top it off, strawberry jelly and ice-cream. We also put on the samovar (a legacy of our obsession for Turkish tea), and had multiple pots of English breakfast teas on the go too. This was A LOT of food, and the table was filled with pyramids of Rice Krispie treats and sandwiches, which in certain cases were overflowing off the plates.

All of this party food had A and C giggling and going on a trip down memory lane. The rice krispie squares were a particular favourite of A's growing up, and for him no party was complete without them. While C had of course eaten them before, she had no idea how to make them (by contrast, A had never tasted a Mars slice before last weekend - shock horror), so A set to work producing a mega batch of his favourite tray bake for C and the guests. C was quite surprised at how absurdly simple they were to make. 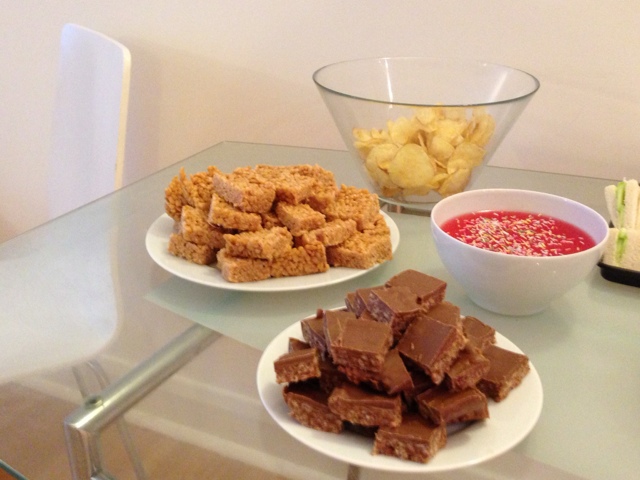 Take a large baking tin, line with baking paper and grease the lined tin. Take 200g of butter, and dissolve in a deep saucepan. Once it is dissolved, add one 200g bag of toffees, stir until they too have melted. Then add a 200g bag of marshmallows. Stir again and these too will dissolve, eventually leaving you with a caramel-coloured viscous liquid. Pour in 150g of Rice Krispies (or other cereal such as cornflakes) and stir slowly until the cereal is covered in the liquid. Pour the coated cereal into the lined tin, leave to cool, cut into squares and serve. That's it: idiotproof and extremely popular.

Fortunately some twenty-five folks turned up to help us polish the squares, and everything else, off. Friends old and new and a few family members turned out to celebrate (and get quite high on refined sugar). Happily, people were mostly complementary about the food and many found the snacks as nostalgic to eat as we found them to make.

As a bizarre aside, the foodstuff that drew the most compliments (along with the ever-popular yoghurt cake and the Mars slices, which all disappeared in the space of an hour) were the cucumber sandwiches. The most quotable comment came from another A, who said, "It's good to see that people still pay attention to the details. I noticed that you even peeled your cucumber as well as removing the crusts from the bread. That's a good thing: I like my cucumber sandwiches to be as anaemic a food as possible." Normally bland is not A or C's favoured way of preparing food, but it's good to know that we can rustle up an admirably boring cucumber sandwich when required.

Thanks to everybody for helping make a lovely (if belated) birthday bash for A!