So, C and A are hardly the sort of folk that you would consider to be hardcore hipsters. C is somewhat more Laura Ashley than American Apparel and A is a suit, so the recent trip to Hackney felt somehow as exotic as going to Turkey and Georgia (if we're honest, the outfits were certainly weirder!). All was not in vain however, since as well as finding an excellent Turkish supermarket (more on this and home-made Turkish breakfasts later), we indulged our collective sweet teeth at the Broad Street market.

You can find the chap selling fudge at the London Fields end of the street. He's pretty grumpy - don't even think about photos without making a purchase - but his wares more than make up for his lack of charm. As the photos demonstrate, stacks of fudge in a rainbow of colours adorn the stall, and those we tried tasted as good as they looked. 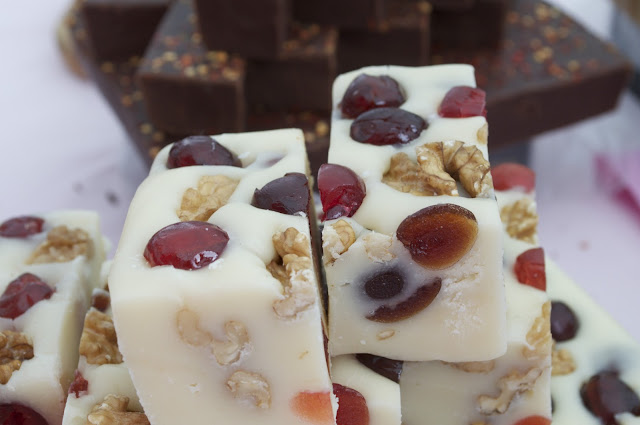 We took on the chocolate orange and the rum and raisin varieties. We didn't take any pictures of the rum and raisin because it wasn't the most attractive of the offerings, but it made the grade in the flavour department. Creamy, boozy and incredibly sweet, it was a wonderful sugar fix. Likewise, the chocolate orange was zingy and melt in the mouth at the same time in what was an unusually stark but nonetheless pleasant combination of flavours.


In all the fudge was excellent, although 100g each was probably excessive in the circumstances. It provided the perfect accompaniment to our beer, cider and scrabble bonanza in London Fields (yes, we ARE that exciting sometimes). We felt that as we were in deepest hipster territory, we needed to do something which was ironically self aware. We might also have tactically strewn copies of Proust and Eco around us as we played. Only the outfits gave us away as not being residents of an E2/E5 postcode (though C has sharply pointed out she was sporting lady brogues that day).